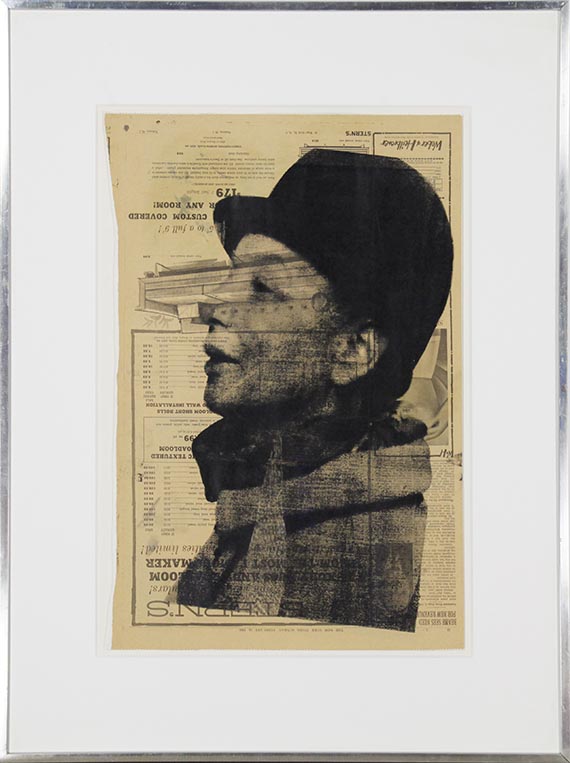 • The collector Florence Barron encouraged Warhol to make his first self-portrait in 1963.
• Proof copy for two six part portrait series on canvas.
• This is one of the artist's first commissions.
• Formerly part of the Henry Geldzahler Collection (1935-1994), influential curator for contemporary art at the New York Metropolitan Museum.
• For the first time on the international auction market (source: artprice).

Andy Warhol. The Master of Pop Art
With his radically innovative serial works, Warhol turned the American and ultimately the international art world inside out in the early 1960s. Initially working as illustrator and graphic designer, he finally turned to painting and fine art in 1961. To this day, the impact of his work and his revolutionary approach to art can be felt, and Warhol was already considered one of the world's most important artists during his lifetime. Less than two years after his death, the Museum of Modern Art in New York honored him with a comprehensive retrospective show. Today his works are part of the world's most prestigious museums, institutions and private collections.
He first used his special silkscreen painting technique, with which he revolutionized painting in the course of the late 20th century, in "Dollar Bills" from 1962. In the "Baseball" silkscreen paintings (Nelson Atkins Museum, Kansas) from the same year, Warhol worked on basis of a photographic template for the first time. Shortly thereafter, the first silkscreen portraits on canvas were created, initially of celebrities such as Natalie Wood, Warren Beatty in the series of works "Teen Stars" (1962). Up until the creation of the work offered here, Warhol produced further portraits of his most famous contemporaries and other icons, including Marilyn Monroe, Elvis, the Mona Lisa, Elizabeth Taylor, Jackie Kennedy, and Marlon Brando, as well as several self-portraits.

With her passionate enthusiasm and great interest in contemporary American art, Florence Barron, along with her husband S. Brooks Barron, accumulated a significant art collection over the course of their lifes. As of the 1920s, the couple lived in Detroit. The modern architecture of their 1955 home came from Minoru Yamasaki (1912–1986), who became famous for, among others, his 1962 design of the World Trade Center. With a keen sense for the important art of her time, Florence Barron bought works by Marc Chagall, Joan Miró, Willem de Kooning, Claes Oldenburg, Cy Twombly, and Andy Warhol, and was also in close contact with the New York art scene, including the legendary Metropolitan Museum curator Henry Geldzahler (who also called the present work his own for some time), Leo Castelli, and Lawrence Rubin. In 1967 Geldzahler wrote the introductory text for the exhibition catalog "Personal Preference. Paintings and Sculptures from the Collection of Mr. and Mrs. S. Brooks Barron" at the University Art Gallery in Oakland, Michigan, in which he stated: "Florence and Brooks Barron have put together a collection that reflects with accuracy the excellence and complexity of post war American art". In 1963 she first visited Warhol's studio "The (Silver) Factory" with her friend Ivan Karp, art dealer and author active for Leo Castelli Gallery, and commissioned him with a portrait. However, things took an entirely different direction, as Karp and Barron encouraged the artist to make a self-portrait for her instead. Shortly thereafter, Warhol made his first significant self-portrait on canvas, which she paid for in several installments while descendants sold it through Christie's in New York for the equivalent of 38 million USD in 2011.


Delicate Shading and Subtly Modulated hues: A Unique Appearance
In 1965, Florence Barron finally commissioned Warhol with a depiction of herself. The many glamorous and gaudy portrait commissions of the 1970s and 1980s were still a long way off at that time. By then Warhol had made just a few commissional works, including "Ethel Scull 36 Times" (1963, today at the Metropolitan Museum of Art & Whitney Museum, New York) for the collector couple Ethel and Robert Scull and the portraits of the writer and philanthropist Judith Green (Barbara Lane Collection, New York).
It can be assumed that the artist also used photos shot in a photo booth for this portrait, however, unfortunately none of these seem to have survived. With pose and the image’s effect as criteria, the artist then selected a single image that he enlarged with the help of a projector and transferred it onto to acetate silk to finally have it processed as a silkscreen. "[Then] Warhol and an assistant squeezed the ink through the screen onto the previously painted canvas. Often, a test print was also made on paper, in order to determine if the subject would come of clean. These paper prints - remnants of the first stages of the printing process, are very precious today." (Toni Shafrazi, in Andy Warhol. Porträts, Hamburg 2012, p. 14). Since Warhol spread the black paint over the screen onto the underlying paper or the underlying canvas by hand (fig.), the intensity of the pressure and the mesh structure turn out differently in each screen print, which the present work exemplifies. While other works of this time, for example the portraits of Elisabeth Taylor, Marilyn Monroe (from 1963), Natalie Wood and the depictions of the Mona Lisa, show stronger contrasts, the silkscreen for the portrait of Florence Barron captivates with delicate shading and finely modulated hues. The catalogue raisonné says the following about the silkscreen used both for the present work and for the works on canvas based on it:"The character of the screen itself and the way Warhol has superimposed impressions accounts for the unique appearance of this work. Rather than the high-contrast image that he characteristically requested from his silkscreen maker, Warhol seems to have worked from an exceptionally low-contrast half-tone that allows the printed impression to become increasingly opaque." (Georg Frei u. Neil Printz (eds.), London 2004, p. 169). Warhol seems to have used several printing processes to closely examine how much color was necessary to achieve a certain intensity and to still bring out the sitter’s facial features in as much detail as possible. In the series of portraits of Florence Barron based on our work, Warhol plays with precisely these gradations. In later works Warhol printed her face, which is so subtly modulated here, several times on one and the same canvas, in order to achieve superimposition and blur. Lined up next to one another, the canvases also show a graded print intensity and a wealth of detail, while the present work echoes the underlying basis of all works on canvas. Newsprint was also used for an earlier proof copy for "Troy" (1962), presumably because it was a medium the artist was very familiar with. As an avid reader of newspapers, the material is always at hand and is also closely associated with his constant search for new photographic images.

Trend-setting
With its unusual depiction in profile, "Florence Barron" is reminiscent of Warhol's famous series "13 Most Wanted Men" (1963), as well as of portraits of Jackie Kennedy, but it is also reminiscent of classical Renaissance portraits and depictions of heads of state on coins and stamps. In this work the traditional portrait type is combined with the elegant fur collar and the mouth open as if to speak, thus identifying the sitter not as a Hollywood star or a beauty queen, but as the clever, articulate art expert she was.
At a time when portraiture was regarded as a dying genre in contemporary art, Warhol, owing to his artistic craftsmanship, as well as his business skills, created innovative, and, as it would turn out, iconic portraits of famous contemporaries and people from his immediate circle of acquaintances (often in square format), which from the early 1960s until his death became his oeuvre’s most characteristic works.

After this work was made, is was initially part of the collection of the art expert Henry Geldzahler, a friend of both Andy Warhol and the collector Florence Barron, who became famous for being a revolutionary, particularly influential, pioneering curator of contemporary art at New York's Metropolitan Museum in the 1960s. [CH]
More Information
+
Sell
Get a free appraisal for a similar object!
+
Register for
Andy Warhol
+
Buying from A-Z
+
Contact a specialist
+
Andy Warhol Biography
Share