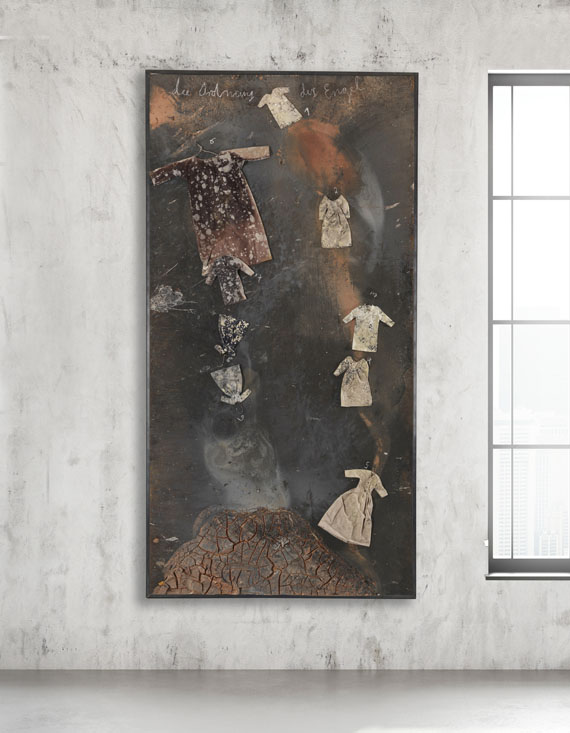 • Signature piece from the London White Cube Gallery.
• "Die Ordnung der Engel" confronts us with the existential theme of the transition between this world and the afterworld, which is characteristic of Kiefer's work.
• In 2007, a comparable work was part of the iconic selection of works in the grand exhibition at the Guggenheim Museum, Bilbao and the Centre Pompidou, Paris (2015/2016).
• Comparable works can be found at, among others, the Museum of Modern Art, New York, the Solomon R. Guggenheim Museum, New York, and the Art Institute of Chicago.
• In 2021/22 the Grand Palais Ephemère, Paris, will show a monumental Kiefer exhibition at specific request of Emmanuel Macron.

LITERATURE: Cf. Anselm Kiefer. Maria durch ein Dornwald ging, Galerie Thaddaeus Ropac, Salzburg 2008.
"Why are there human beings in this universe? We don't know why we are here and we don't know what will come after us. [..] What I do is also the attempt to approach something that I can no longer control with the mind [..].

I try to approach the origin, so I can gain the illusion that I am at the origin and know something about origin and therefore also about the future."
Anselm Kiefer, 2006, quoted from: Anselm Kiefer. Aus der Sammlung Großhaus, ex. cat. Cologne 2008, p. 160.

Anselm Kiefer and his Mystical Search for Meaning

Anselm Kiefer has succeeded in capturing the central questions of origin, earthly transience and cosmic infinity with his unmistakable poetic pictorial inventions like no other artist. His large-format paintings appear melancholic, and in terms of content, they often seek to deal with the existential questions of our existence, the beginning and end of human existence. Kiefer is able to develop existential themes in just one work, to challenge viewers and to widen their horizon. In the confrontation with Kiefer's work, one inevitably leaves mundane grounds and explores the horizon beyond the limits of the own existence into transcendent spheres. Who are we? Why are we here? What happens after death? And what will come after us? These are the central questions that preoccupy Kiefer and drive him in his painterly search for the origin of human existence. In addition to topics from German history and literature, the thoughts about life and death have also shaped Kiefer's unmistakable oeuvre since the 1980s, which quickly found international recognition. The Museum of Modern Art, New York, honored Kiefer's work with a large solo exhibition in 1988/89, which was also shown at the Museum of Contemporary Art, Los Angeles, the Philadelphia Museum of Art and the Art Institute of Chicago. It was the first grand Kiefer exhibition in the USA. The foreword of the exhibition catalog says the following about Kiefer's artistic work: “Modern man’s lack of a shared spiritual language and a common mythology does not lead Kiefer to the conclusion that art must be created for it’s own sake, but rather that such a language must be renewed or reinvented. […] Kiefer is a young artist and it is premature to make definitive claims for his work, but it is already clear that the powerful visual expression of his ‚going deeper, into more ancient strata‘ offers one of the most challenging developments in recent art.“ (Ex. cat. Museum of Modern Art, New York 1987, p. 7).
"The Order of Angels” – The Mystery of Transcendence

Kiefer turns to long-forgotten, collective knowledge, in order to understand our origins and to get closer to questions regarding limits, meaning and the future of our existence. "I think by painting" is a famous Kiefer quote that aptly describes Kiefer's complex painting, which appears almost as a kind of ‘painted philosophy’. But what exactly is the historical knowledge on which our fascinating work entitled "Die Ordnung der Engel“ (The Order of Angels) is based and which Kiefer carries into the here and now? Anyone who has ever dealt with the hierarchy of angels in Christianity will rejoice in the allusions to the almost forgotten ideas of the Middle Ages. For those who are not familiar with the subject, Kiefer stimulates curiosity to learn more about the mysterious ideas of the supernatural. Kiefer examines the division of the heavenly beings of Christian mythology into three hierarchical levels and a total of nine orders that has existed since the early Middle Ages, and which is depicted in medieval painting as the nine choirs of angels. It is based on the 6th century text "De Coelesti Hierarchia“ (About the Heavenly Hierarchy), written in Greek by an anonymous author mentioned in research under the name ‘Pseudo-Dionysius Areopagita’, which describes the order of angels, archangels, powers, authorities, princes, rulers, thrones, cherubim and seraphim as a symbol of the soul's mystical path to God. It is therefore about Christian culture’s central question of the transition from immanence to transcendence. In addition, the writing deals with the problem of the physical representation of transcendent beings, beings we are unable to imagine, and concludes that every form, everything material is bound to fail in the representation of transcendence. Accordingly, it is not winged angels, but empty, material shells that Kiefer lets rise into the infinite black in a circular motion reminiscent of the wheel of Fortuna from a deeply furrowed, earthy encrusted surface. It is about the depiction of afterlife, which, in contrast to medieval representations of Ascension, appears in complete darkness as the unknown in Kiefer's work. The material shells of transcendence seem to stray aimlessly in front of the infinite deep black. Kiefer doesn't answer our existential questions, he doesn't show us a divine being as the goal and center of this transcendent course, but leaves us with an unanswered question. It is precisely this openness in terms of content that gives Kiefer's paintings, despite all their complexity, the unique melancholic and mysterious character.

Since the 1990s, Kiefer has put increasing focus on the artistic examination of the bridges between heaven and earth, between this world and the afterlife. This existential theme is what the “Ordnung der Engel” and the well-known series of the “Merkaba” pictures have in common, in which Kiefer, on his quest for meaning, examines Jewish mysticism that describes the ascent to the seven heavenly palaces and thus the liberation from all earthly constraints. This series of works also includes Kiefer's “Steigend, Sinke Nieder“ (Rising, Sink Down, 2003) in the collection of the Museum of Modern Art, New York. Owing to its extraordinary materiality, the present large-format work "Ordnung der Engel", closely related to the aforementioned in terms of content, is also a particularly characteristic and visually fascinating example from his world-famous oeuvre. As early as 2000, Kiefer created a monumental work entitled "The Order of Angels" (9.5 x 5.1 meters), which is considered the starting point for the artistic examination of this motif, it was part of the grand show at the Guggenheim Museum, Bilbao (2007) and the major retrospective at the Center Pompidou, Paris (2015/16). Another "Order of the Angels" from 2007, which has remained untitled in the depiction and which can be understood as a counterpart to the present work in terms of format and technique, was on display in the exhibition "Anselm Kiefer. Maria durch ein Dornwald ging" at Thaddaeus Ropac Gallery, Salzburg, in 2008, The exhibition also featured other works dealing with the Christian resurrection theme. [JS]
More Information
+
Sell
Get a free appraisal for a similar object!
+
Register for
Anselm Kiefer
+
Buying from A-Z
+
Contact a specialist
+
Anselm Kiefer Biography
Share