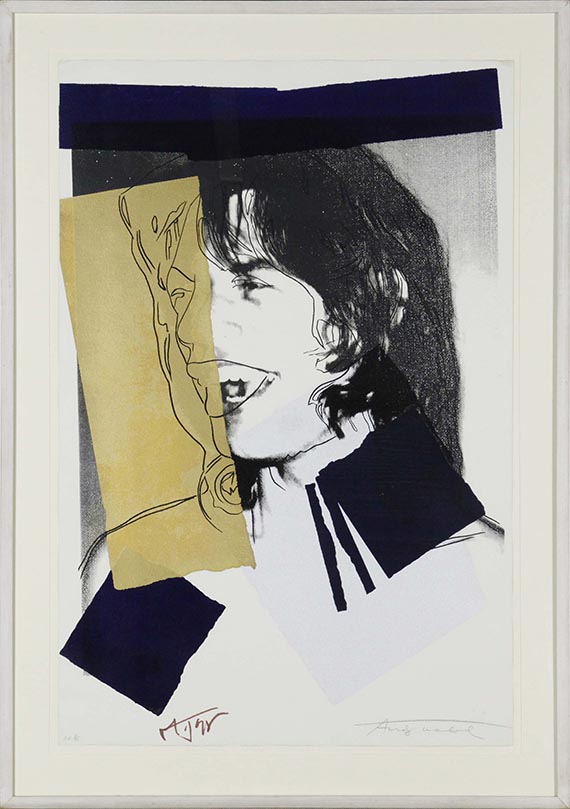 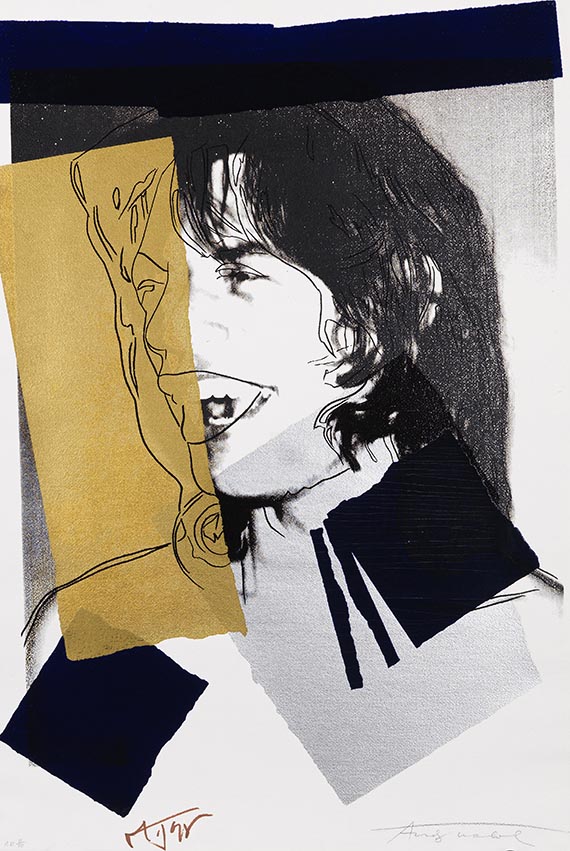 130
Andy Warhol
Mick Jagger, 1973–197.
Silkscreen
Estimate:
€ 60,000 / $ 55,200
Sold:
€ 93,750 / $ 86,250
(incl. surcharge)
Mick Jagger. 1973–1976.
Silkscreen.
Feldman/Schellmann/Defendi II.142. Signed and numbered, also signed by Mick Jagger. From an edition of 50 artist copies. On slightly structured wove paper. 111 x 73.5 cm (43.7 x 28.9 in), size of sheet.
Published by Seabird Editions, London (with the stamp on the reverse). Printed by Alexander Heinrici, New York.
• Signed by Mick Jagger and Andy Warhol.
• In 1975 Mick Jagger rented Warhol's house on Long Island, where Andy Warhol shot the Polaroid the work is based on.
• Today "Mick Jagger" is among the Andy Warhol's most famous portraits.
• The same year Andy Warhol added collage-like, voluminous color fields and graphic lines to his silkscreens.
• Warhol's enormous œuvre comprises paintings and silkscreen prints that have one thing in common: repetitive motifs from pop culture with a high recognition value and with commercial, gaudy and flat surfaces.

PROVENANCE: Dominion Gallery Montreal (with a label on the reverse; sold at Sotheby's in 2000)
Private collection Germany.

In the spring of 1975, the Rolling Stones rented Warhol's Montauk Church Estate on Long Island in preparation for their next tour. Warhol took advantage of this situation and produced numerous photographs of Mick Jagger showing him shirtless in a variety of different moods. Using his own snapshots for the resulting graphic portraits, Warhol eliminated a defining aspect of moment in his earlier work. Based on these photos, he created portfolios consisting of ten different portraits, for which he used a new technique for the first time: a combination of photo, collage and drawing. He lays colored areas over the actual representation like strips of paper, and thus creates effective and flirtatious representations of the musician. In addition to the Marilyn Monroe series, the depictions of Mick Jagger from the mid-1970s, are among Andy Warhol's most famous portrait depictions. The frontman of the "Rolling Stones", founded in 1962, who at that time had already completed numerous American and European tours and had achieved worldwide fame not only through their progressive music but also through their provocative stage shows, was regarded as a symbol of freedom that defies all social conventions. The eccentric Warhol, who established trademark of a white-blond wig and black sunglasses in the 1960s, must have recognized a kind of eccentric alter ego in Mick Jagger, which inspired him to create epochal portraits. A special feature is the signature of the musician on some of the prints. Not only the "painter" but also his model are immortalized in these works. [EH]
More Information
+
Sell
Get a free appraisal for a similar object!
+
Register for
Andy Warhol
+
Buying from A-Z
+
Contact a specialist
+
Andy Warhol Biography
Share