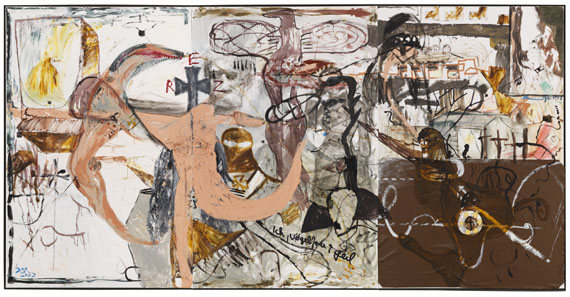 We are grateful to the Bureau Jonathan Meese, Berlin, for the kind support in cataloging this lot.

PROVENANCE: Contemporary Fine Arts, Berlin (with label and gallery stamps on the stretcher).
Private collection Hamburg (acquired from the above).
Ever since family-owned.

"When I say 'I don't make art', all that really means is that I don't have any recipes on how to make it. I have no idea, no justification for how to behave, I don't know what leads to creating art. I don't believe in creativity, nor in imagination, at least not as a guarantor of art production - it's a mysterious process for which we have no words. I believe that art creates itself and then decides for itself what it is."
Jonathan Meese, quoted from: Artist. Kritisches Lexikon der Gegenwartskunst, Munich 2006, p. 3.

More Information
+
Sell
Get a free appraisal for a similar object!
+
Register for
Jonathan Meese
+
Buying from A-Z
+
Contact a specialist
Share