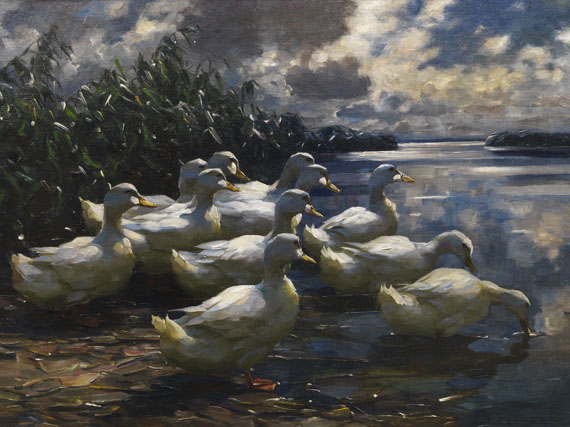 On his parents’ behest, Alexander Koester was apprenticed to a pharmacy in Wintzheim near Colmar in 1882. On completing his apprenticeship, he enrolled at the Karlsruhe Academy under Carl Hoff and Claus Meyer. In 1889, the artist embarked on extensive travels and produced numerous sketches, especially during hikes through the Inn and Ötz valleys, which later became the source of a series of genre paintings. As a student, Koester already earned his living through portrait commissions. It was during this period that he first traveled to Klausen in South Tyrol where he would later take up permanent residence. First, however, he returned to Karlsruhe, devoted himself to genre painting alongside portraiture and took part in numerous art exhibitions. After finishing his studies, Koester relocated to Klausen. In his new work environment, he became a prolific artist, producing numerous paintings directly inspired by nature. During this time, he discovered the duck motif as an object of study that would occupy him in many variations for the next thirty years. In a remarkably short time, this motif became extremely popular. To gain easy access to the Upper Bavarian landscapes he painted in the summer months, Koester rented a studio in Munich. With ever-increasing virtuosity, he created late Impressionist portrayals of reflective water surfaces with ducks’ plumage shimmering amidst layers of light and shadow. His work was crowned with success: In 1904, he was awarded a gold medal at the World Exhibition in St. Louis for his “Ducks” and received another gold medal from Prince Regent Luitpold of Bavaria for “Dem Ufer zu” (“Towards the Shore”). From 1908, the artist frequently visited the Lake Constance area to paint large expanses of water in all weather conditions. During the war, Koester spent some time in Diessen on Lake Ammersee, where he finally settled down and started to develop a passion for floral still lifes. The duck motif nevertheless remained a key element of his work to the last. Alexander Koester died as a distinguished artist in Munich on December 21, 1932. His portrayals of ducks framed by landscape scenery underpin his nickname “Enten-Koester” (Duck Koester) to this day.
Few artists are as closely associated with a specific theme as Alexander Koester is with his duck motifs. Yet they represent only one aspect of his work, a fact that is often overlooked considering the prominence of the subject in his artistic oeuvre. He was not unique in his preference for the Impressionist style of painting, or in his exploitation of all possible shades and tones in the context of a given subject. Nevertheless, Koester’s duck paintings constitute a unique oeuvre. While his choice of subject matter is essentially mundane, the results are of a surprising variety, both in artistic and compositional terms. The subject of the paintings almost assumes a secondary role. Underpinned by extraordinary technical skills, his best works demonstrate an exploration of light and color that brings Late Impressionism to its final culmination. [KD]
More Information
+
Sell
Get a free appraisal for a similar object!
+
Register for
Alexander Koester
+
Buying from A-Z
+
Contact a specialist
+
Alexander Koester Biography
Share