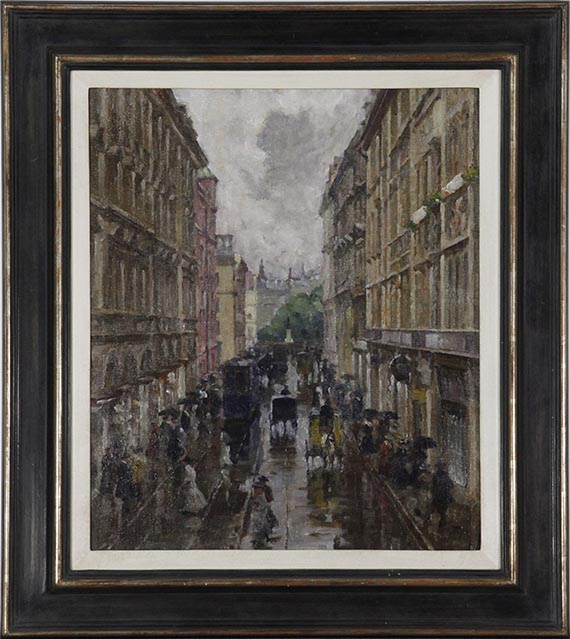 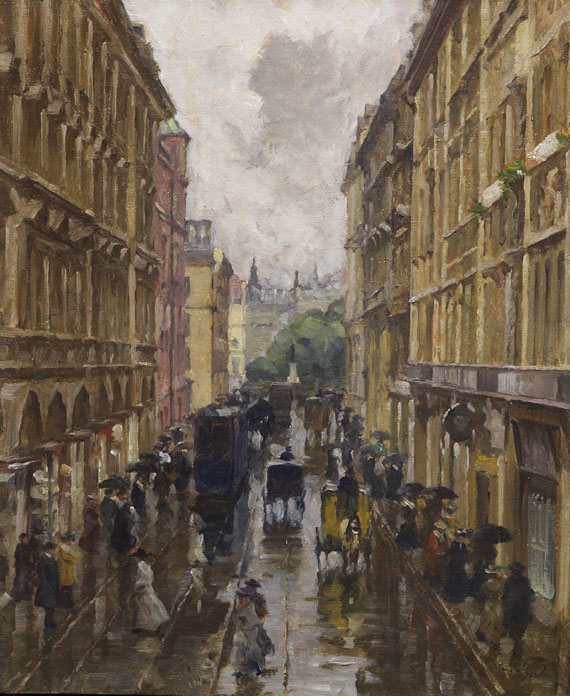 We are grateful to Mr Peter Zimmermann, Ahrensburg, for his kind expert advice.

In his work, Charles Vetter, who studied at the Munich Art Academy from 1881, first in the drawing class and then in the landscape class, devoted himself most successfully to the motif of impressionist city views. After working in Merseburg, Leipzig and Dachau, he finally settled in Munich in 1893, where he created urban-architectural portraits from ever new angles. Like numerous other European metropolises, the city of Munich was repeatedly shaped by new entrepreneurial and architectural projects in the course of the 19th century. Maffeistrasse is named after the entrepreneur Joseph Anton von Maffei (1790-1870), owner of a machine and locomotive factory. He acquired the property on Promenadeplatz, and had the Hotel Bayerischer Hof built by the architect Friedrich von Gärtner in 1841. At the time the work was created, the tram tracks were already running through the streets. However, war-related losses were responsible for the change in the cityscape, of which Vetter creates an atmospheric impression here. In terms of composition, Vetter rendered an extreme perspective of the pictorial arrangement to seek comparison with the depictions of boulevards in Paris by Claude Monet or by Lesser Ury in Berlin, who stage the streets as the city's lively arteries. The atmospherically changing lights, here harmoniously captured by gray-blue tones of the sky reflected in the rainy street in comparison to the warm ocher-colored house facades and the black of the horse-drawn carriages and umbrellas, show the city as a constantly changing motif. [KT]
More Information
+
Sell
Get a free appraisal for a similar object!
+
Register for
Charles (Karl) Vetter
+
Buying from A-Z
+
Contact a specialist
Share