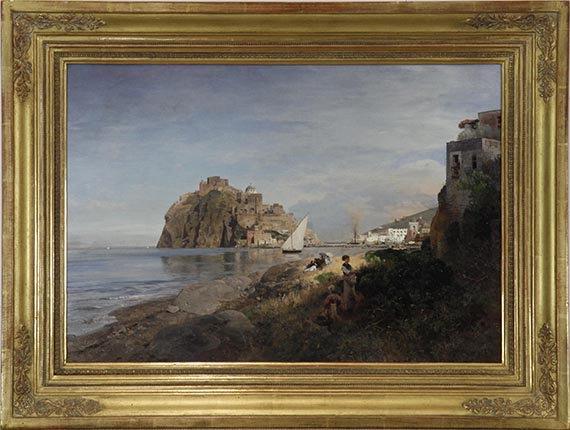 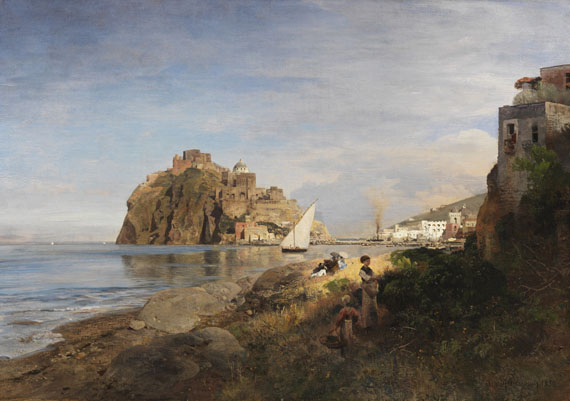 • Oswald Achenbach, along with his brother Andreas, was one of the leading European landscape painters and co-founder of the Düsseldorf School
• Very characteristic Achenbach composition with a shady foreground and view across the sea
• Achenbach's paintings were formative for the late romanticist idea of Italy
• From the lighter free work of the 1880s, in which Achenbach attained a transparent light-flooded effect.

"What richness in tone, in object: a firework of brilliance, sparkle, shine, a bubbling painterly spirit of quite extraordinary abilities. [..] It seems as if he wants to announce Italy's honors"
Cornelius Gurlitt, Die Deutsche Kunst des 19. Jahrhunderts, Berlin 1907, p. 378

Oswald Achenbach is one of the most important landscape painters of the 19th century. As the main representative of the Düsseldorf School of painting, the development of which he influenced as professor of the landscape class at the art academy, he devoted his artistic creativity primarily to the classic Italian landscape. This natural setting, explored on numerous study trips, was a reliable source of inspiration and prompted him to travel south again and again. In 1871 he stayed in Italy with his family for nine months and traveled to iconic places like the picturesque Amalfi Coast and the islands of Capri and Ischia. Romantic fascination echoes in the rocky island of Trachyt with the centuries-old fortress enthroned on the summit with its eventful history, next to which the dome of the Chiesa dell'Immacolata can be seen. In Achenbach’s art, characteristic architecture, nature and people always enter into a refined and harmonious synthesis, which even allows those elements that the artist arranged and composed to appear natural. However, the light in of Oswald Achenbach's paintings is particularly special and the artist knew how to use it for a variety of effects. In our picture, the landscape is illuminated by the soft late afternoon sunlight. In places, this lighting effect leads to an almost modern dissolution of the contours in the picture: "The atmospheric and painterly combined to form an inseparable unit and thus resulted in a sketchiness of the representation, which rightly made him [Achenbach], parallel to French Impressionism, to count among the representatives of a colorist modernism." (quoted from: Ekkehard Mai, Der Sehnsucht Traum und Wirklichkeit - Oswald Achenbach zwischen Romantik, Realismus und Salon, in: Ausst.-Kat. Andreas und Oswald Achenbach. Das A und O der Landschaft, Kunstmuseum Düsseldorf 1997/98, p. 43-56, here p. 53). [KT]
More Information
+
Sell
Get a free appraisal for a similar object!
+
Register for
Oswald Achenbach
+
Buying from A-Z
+
Contact a specialist
+
Oswald Achenbach Biography
Share