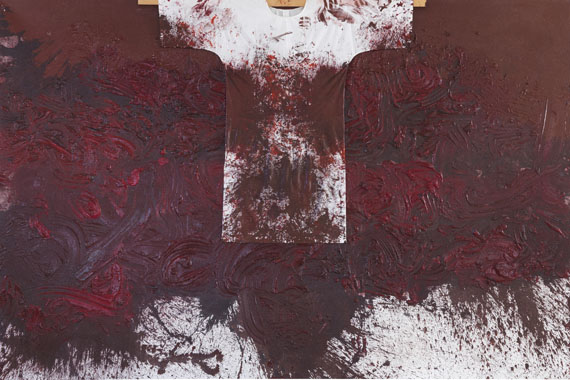 Along with the artists Günter Brus, Otto Muehl and Rudolf Schwarzkugler, the recently deceased Hermann Nitsch was one of the central protagonists of "Viennese Actionism" in the 1960s. Characteristic of his work is the reference to religions, philosophical ideas and ancient mystical cults. From the mid-1950s, he pursued the idea of \u8203\u8203 his "Orgies Mysteries Theater", in the spiritual context of which all his works ultimately stand. He strove to appeal to all five senses with his work, and was a reformer of the idea of \u8203\u8203 the ‘total work of art’. Throughout his life, religion and philosophy, psychoanalysis, poetry, theater and classical music played a prominent role in the artist's work, which brought him closer to the idea of \u8203\u8203 the ‘total work of art’. His so-called painting actions also show Dionysian traits and were inspired by old cults.
The present work was created in context of the 64th painting action at the Mart - Museo di arte moderna e contemporanea in Rovereto in 2012. The event took place in front of the eyes of the public over a period of eight days. He and his assistants also used the preferred painting style of pouring and smearing with the hands to create this work. They wore white painting shirts during the painting action, working on the canvas with full physical exertion. The painting shirt is also a key element of Nitsch's work. It is applied onto the canvas at a central point, and thus reflects the painting process. This way the process of creation can also be seen and experienced by viewers who did not follow the painting action on site.
In his work, Nitsch was intensively preoccupied with color. The color red in particular is characteristic of his work and is of great importance to him, as it stands for life and death and is associated with blood. Animal blood is also used in many of his paintings. In Nitsch's view, red is "the color that stimulates perception most intensively, because it is the color of life and death at the same time". [JK]
More Information
+
Sell
Get a free appraisal for a similar object!
+
Register for
Hermann Nitsch
+
Buying from A-Z
+
Contact a specialist
+
Hermann Nitsch Biography
Share