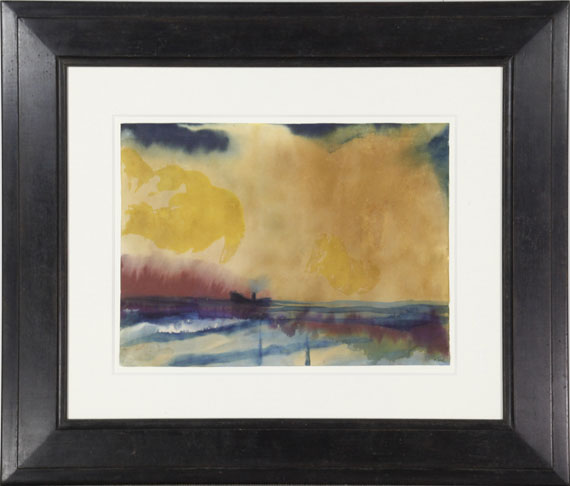 Accompanied by a photo expertise issued by Prof. Dr. Manfred Reuther, then director of Foundation Seebüll Ada and Emil Nolde, from September 21, 2016.

LITERATURE: Stuttgarter Kunstkabinett Roman Norbert Ketterer, 33rd auction, Modern Art, May 30, 1959, lot 659, with black-and-white illu., plate 57.
"I saw the excited and wild beauty, which in the evening draws its fingers of fire across the arch of the sky in the last floating strips of cloud, fading in blazing, glowing colors. I felt the sultriness of the hour, I felt it like embers and sparks, painting, painting in a lifelike, most obedient sensitivity, obeying orders I had received."
Emil Nolde, quoted from: Emil Nolde. Mein Leben. Cologne, DuMont Buchverlag 1976, p. 378.

When Emil Nolde and his wife Ada first settled in Utenwarf and later in Seebüll, he increasingly focused on the surroundings to find the subject for his art. This special land between the seas would serve Nolde as an inexhaustible source of inspiration - the unique marsh landscape, the lush cottage gardens that could be found around every home and ultimately the sea itself. For Nolde, the sea was an elementary force that deeply impressed him. The peculiarities of this motif offered him unlimited possibilities, especially in the watercolor technique. The color’s richness and boisterous energy became the essential means of expression. When set free, a virtuoso play of exploding color tones unfolded, becoming a natural phenomenon in the picture itself. Nolde's interpretations of landscape, sea and sky are always interpretations of his own mood. He did not see the landscape in the sense of a realism dressed in expressive colors that appears new and exciting. His landscapes are permeated by the desire to identify the metaphysics inherent in nature and to make them perceptible and comprehensible for the observer. He chose the watercolor technique for its properties. As it is fluid by nature, it suited his wish to convey the dynamism of nature the most. Allowing the images to develop naturally as his brush meets the paper, Nolde worked in a way where color creates form, a true manifestation of the ideals of Expressionism. Through the glowing colors and the simplified forms bordering on abstraction, Nolde succeeded in giving his atmospheric compositions a strong emotional and spiritual resonance. Sky and sea merge into one, the forms flow into one another in a magical play of colors. Where do they begin? Where do they end? The dramatic sky seems to almost overwhelm the small steamer, which remains the only fixed point in this vast ocean of color. It is just a small actor on a stage that solely belongs to the fascinating forces of nature. Therein lies her beguiling beauty, which Nolde brings to paper like no other. [SM]
More Information
+
Sell
Get a free appraisal for a similar object!
+
Register for
Emil Nolde
+
Buying from A-Z
+
Contact a specialist
+
Emil Nolde Biography
Share