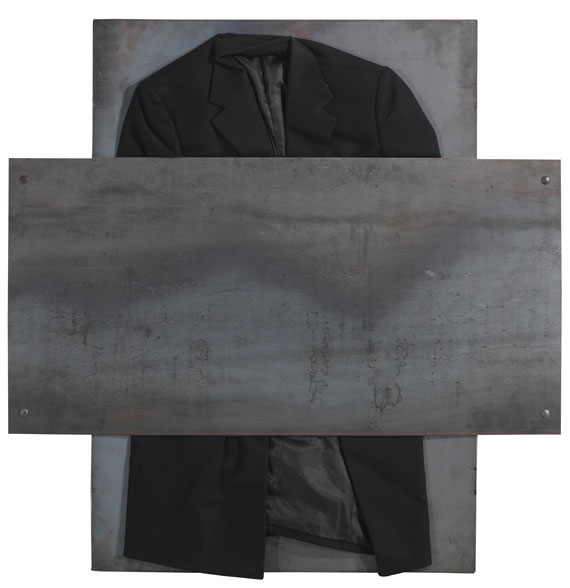 • Co-founder of Arte-Povera.
• Characteristic use of materials allowing for a wealth of associations.
• Participation in documenta 5 (1972), and documenta 7 (1982) in Kassel.
• Between 1974 and 2013, Kounellis showed his works at the Venice Biennial 8 times.
• The Walker Art Center, Minneapolis (MN) currently shows a grand retrospective in cooperation with the Museo Jumex, Mexico City.
• His works are part of the collections of the MUSEION, Bolzano, the Centre Pompidou, Paris, the Guggenheim Museum, New York, and the MoCA, Los Angeles.

With a photo confirmation from Galleria Fumagalli, Bergamo, and Jannis Kounellis .

The art of Jannis Kounellis is characterized by a very poetic core. Even if the materials appear dark and heavy, the effect they created is highly subtle. In the present work he uses iron and cloth, a heavy black wool coat, to be more precisely. A variety of associations are evoked by these two very contrasting materials. In the spirit of Arte Povera, of which he is a representative, he works with a few but concise means. The contrast between the soft, woolly, warming fabric and the cold, inflexible steel is a dialectic structure of effects. At the same time, the vanished person is fixed to the wall like in a picture. Kounellis presses the coat between two heavy iron plates, he takes the space away from it and at the same time gives it back as a presentation. Collective memories are created with the greatest impact. The work was exhibited in 2009 as part of the exhibition "Jannis Kounellis a Bergamo" at Galleria Fumagalli, Bergamo. With the spatial installation there, Kounellis was proposed for the Vatican pavilion at the 54th Venice Biennale in 2011. Ultimately, however, the Vatican only took part in the important show with other artists as of the 55th Biennale in 2013. [EH]
More Information
+
Sell
Get a free appraisal for a similar object!
+
Register for
Jannis Kounellis
+
Buying from A-Z
+
Contact a specialist
Share