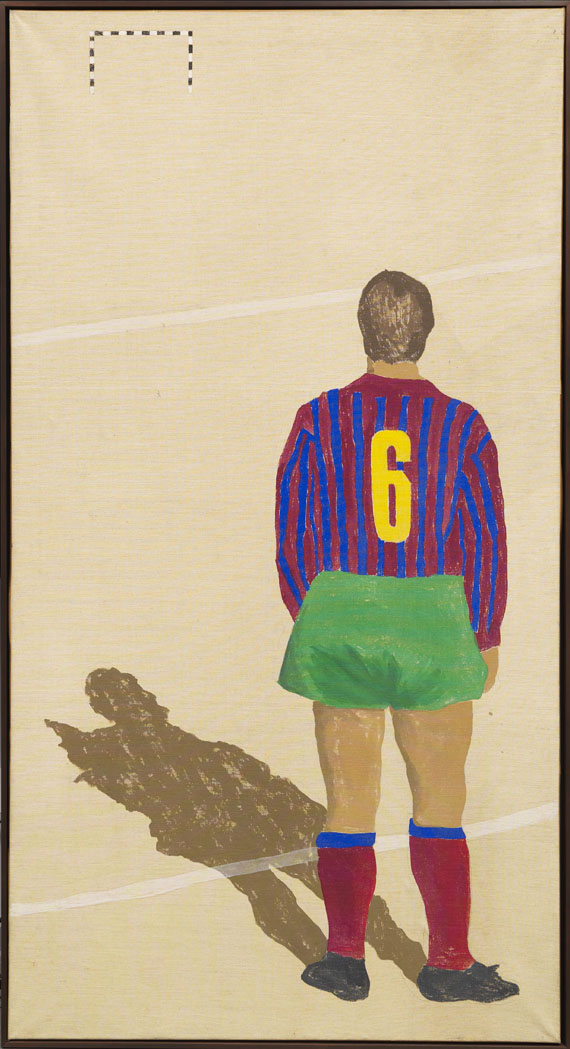 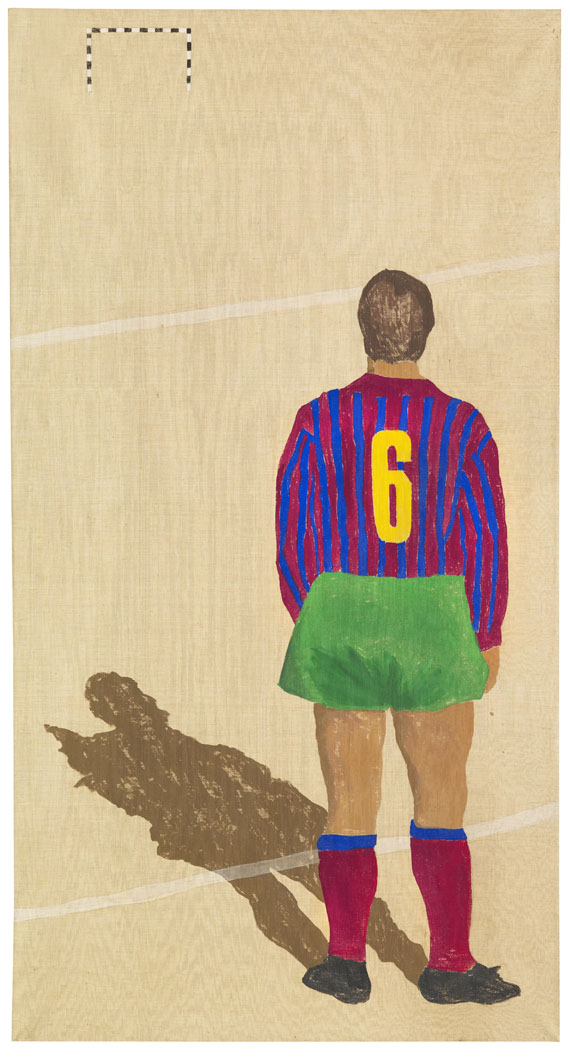 • Pictures of football players are a sought-after motif in the artist's small œuvre.
• Konrad Lueg's paintings are extremely rare on the art market.
• Family-owned since the 1960s.
• As Konrad Fischer, Konrad Lueg was one of the most important and most influential gallerists for art from the 1970s and 1980s.
• The Städel Museum in Frankfurt am Main is in possession of a multi-figure football player picture from Konrad Lueg.
• Other works are at the Museo Arte Contemporanea, Barcelona, the MoMA New York, and the Walker Art Center, Minneapolis.

Düsseldorf was the center of contemporary art in Germany in the early 1960s. Accordingly, it is little surprising that some of the artists studying at the Düsseldorf Art Academy under Bruno Goller, Gerhard Hoehme and Karl Otto Götz in those days would be acclaimed artist one day. From 1961, Joseph Beuys introduced his new concept of art at the traditional institution. Alfred Schmela showed representatives of the international avant-garde at his gallery. Counter positions to the ubiquitous Informalism came from the Zero group around Piene, Mack and Uecker, or from George Maciunas at the Festum Fluxorum.
Konrad Lueg studied with Bruno Goller from 1958, and switched to the class of Karl Otto Götz in the winter of 1960/61. He was expelled from the academy for no apparent reason and without a degree in November 1962, however, it seems that his political activities may have been the reason why. The Düsseldorf native Lueg had close ties with the local art scene and knew many artists and art lovers through Peter Brühning. At the academy he became acquainted with Gerhard Richter, Manfred Kuttner and Sigmar Polke, who would make art history under the name "Kapitalistischer Realismus“ (Capitalist Realism). However, their financial situation was difficult. "At the time I was earning a little as assistant teacher, Polke worked [sic] at the tax office and Richter got something like a refugee allowance" (K.Fischer in: Kunstforum International vol. 104, 1989, p. 278). However, he continued to work as an artist under his mother's maiden name "Lueg".
In 1962 he discovered casein paint as a painting medium, which is well-known under the brand name 'Plaka' paint. It dries quickly, guarantees a flat appearance and is inexpensive. This was absolutely what he desired, since he was only able to create new art if he could provide a clear opposite to the material-intensive painting of Informalism. He also pursued a new path in terms of pictorial content. Konrad Lueg stages footballer players and boxers. Today these depictions are among his most significant works. To him it was not about the sport but about questioning these new heroes. The first season of the German Football League started in 1963, and in this context a new heroic image became omnipresent in Germany: the football player. Finally, people felt like they had reason and permit to cheer again. A position that Konrad Lueg addressed profoundly and subtly. As was the case in the legendary exhibition "Leben mit Pop - eine Demonstration für den kapitalistischen Realismus" (Living with Pop - A Demonstration of Capitalist Realism) in which he critically eyed the economic miracle of the 1960s. The figures in his football pictures are barely in motion, they are faceless and often shown from behind, field and ball are not visible. In the present work, Konrad Lueg presents the football player from behind in front of an empty field, probably looking at a distant goal. All the hectic pace and emotions typical of the sport can’t be found in the picture. The player stands alone in the field and helplessly gazes at the distant goal. This is not about icons, but maybe about the people that Peter Handke wrote about in his novel "The goalie's anxiety at the penalty kick" from 1970. [EH]
More Information
+
Sell
Get a free appraisal for a similar object!
+
Register for
Konrad Lueg
+
Buying from A-Z
+
Contact a specialist
Share