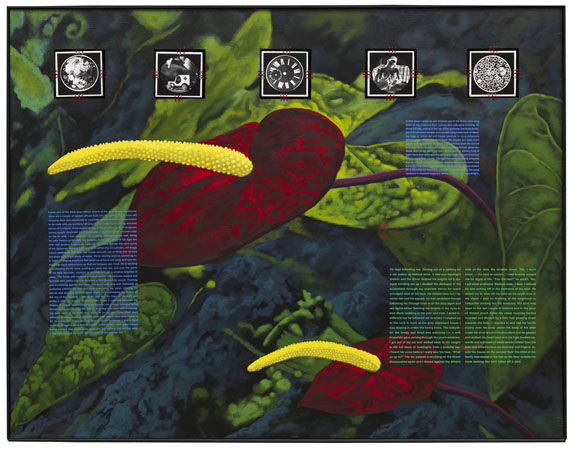 • Along with Jean-Michel Basquiat, Keith Haring and Kiki Smith, David Wojnarowicz is considered a New York subculture icon of the 1980s East-Village.
• In 1992, the young artist died much too young from the consequences of his HIV infection.
• Paintings from the small series of the erotically charged flower pictures (1990) are among Wojnarowicz's very last works.
• With his conceptual, provocative, socio-critical and stylistically versatile works, Wojnarowicz addresses homophobia, as well as the indifference and inaction with which politicians reacted to the then raging HIV epidemic.
• In a characteristic manner, "He Kept Following Me" unites the artist's and activist's literary, painterly and photographic creation, which comprises painting, photography, film, collage, drawing, printmaking and installation, as well as music and writing.
• In 2018 part of the grand retrospective at the New York Whitney Museum of American Art.
• Similar paintings are at the world's most renowned museums like the Museum of Modern Art and the Metropolitan Museum in New York, the San Francisco Museum of Art and the Art Institute of Chicago.

PROVENANCE: P·P·O·W Gallery, New York (verso with the gallery label).
Private collection Southern Germany (acquired from the above in 1991).

Nan Goldin: "What would you like your work to do?"
David Wojnarowicz: "I want to make somebody feel less alienated–that’s the most meaningful thing to me. I think part of what informs the book is the pain of having grown up for years and years believing I was from some other planet."
Quoted from: www.aperture.org/editorial/david-wojnarowicz-and-nan-goldin.

"To make the private into something public is an action that has terrific ramifications."
David Wojnarowicz, quoted from: www.whitney.org/exhibitions/david-wojnarowicz.

David Wojnarowicz was a brilliant late-20th century artist, writer, experimental filmmaker, and AIDS activist who used any tool of communication he could get his hands on to fight for visibility in what he termed “the pre-invented world,” an ossified society in which the imagination was “one of the last frontiers of radical gesture.” Self-taught in the arts and letters, he developed a stirring and concise vocabulary of sounds and images, looking to visionary discontents like Jean Genet, Artur Rimbaud, and William Burroughs for inspiration. He was above all a collagist, in the larger sense of the term, who understood and cultivated the mysterious fusion resulting from the collision of two or more particles of imagery.

“Inside my head behind the eyes are lengthy films running on multiple projectors.” (“In the Shadow of Forward Motion,” 1989)
In 1982, Wojnarowicz’s spray-stenciled symbols of a burning houses, falling figures, and camouflaged soldiers appeared anonymously on walls throughout Manhattan, often on posters advertising gigs for the artist’s band, 3 Teens Kill 4–No Motive. As these spraypainted icons evolved into paintings on board, he began exhibiting his work in East Village galleries. From that point on, Wojnarowicz’s restless approach to art and literature was distinguished by a porous interchange of images, whether captured on film, painted, sculpted, performed, or written. He combined and recombined a distinctive vocabulary of thought-pictures throughout his brief career. For him, collage was not some random, Dadaist process—it was an arsenal for razor-focused yet hallucinatory assaults on the embattled sociopolitical fabric of the 1980s and early 1990s.
“Queer in Normal” (art headline in the February 13 issue of the "Village Voice")

In January 1990, Wojnarowicz’s first retrospective, "Tongues of Flame", opened at Illinois State University, in Normal, Illinois, with support from a grant from the embattled National Endowment for the Arts. Shortly afterwards, tiny details from the exhibition catalog, including one showing Jesus with a syringe in his arm, were xeroxed and mass-mailed without permission by the right-wing American Family Association. A national controversy ensued, resulting in an historic lawsuit that the artist eventually won. Along with Robert Mapplethorpe, Holly Hughes and Andres Serrano, Wojnarowicz was widely recognized as a champion for artists’ rights of expression.

Wojnarowicz returned to Bloomington-Normal in September 1990 to make artwork for “In the Garden,” his final solo exhibition in New York before his death. He rented a high-ceilinged downtown studio and began work on four paintings featuring colossal images of exotic flowers. Assisted by Patrick MacDonald, he projected photographs he’d shot at the U.S. Botanic Garden in Washington, D.C., onto four- by five-foot wood panels, then painted the flower images in acrylic. With one exception, these were his last paintings. Wojnarowicz also shot several photographs during this trip, including one of the nearby Native American burial ground whose excavated skeletons were the basis of one of his most revered photo-text works, "When I Put My Hands on Your Body".

“I don't obey the time elements of history or space and distance or whatever; I fuse them all together.” (interview with Barry Blinderman, 1989)

"He Kept Following Me", one of the four flower paintings, is exquisitely multilayered, both graphically and conceptually. Rather than painting images over pre-printed materials like maps, newspapers, and grocery posters as in his earlier paintings, the artist silkscreened three blocks of colored text right over a lushly painted pair of scarlet anthurium flowers. Additionally, he inset a row of five vignetted black & white photographs across the upper part of the painting. Each of the photos was mounted on board and suspended by stitches of red string. Appearing as if viewed through a surveillance lens, they picture from left to right: the moon, an ambulance superimposed on a detail of a face, a clock with Roman numerals, a naked man masturbating, and blood cells. Three of the photos were printed in negative, heightening their eeriness. They are portholes into the existential domains of sex, time, space, illness, and death.
“I’m really interested in breaking down the distance between humans and nature.” (interview with Barry Blinderman, 1989)

It is puzzling at first to encounter "He Kept Following Me", a precisely rendered painting of flowers by an artist who was recognized for exposing the corruption, and homophobia of the “one-tribe nation” he so reviled. But considering the tens of thousands of AIDS deaths in the U.S. at the time, his gigantic anthurium flowers’ seductiveness is tempered by a constellation of darker meanings. Flowers are a multivalent symbol, on the one hand celebrating weddings and holidays, on the other, funerals and hospitals. Three of the four tropical flowers portrayed in the quartet of paintings—anthurium, torch ginger lily, and calla lily—are commonly seen at memorials. Wojnarowicz considered his portrayal of flowers a respite from the chaos in his life. He was well versed in the natural sciences and perhaps knew that the waxy, fleshy petals of the anthurium are mildly toxic if chewed, causing burning and blistering in the mouth. This paradoxical poison calls to mind Rimbaud’s description of the poet as one who “consumes all the poisons in himself, to keep only their quintessence.” Wojnarowicz told his friend, the artist Marguerite Van Cook, that he was also inspired by the 19th century Decadent poetry—in particular, Charles Baudelaire’s banned book of poetry, "Les Fleurs de Mal" ("The Flowers of Evil"), and Joris-Karl Huysmans infamous "À Rebours" ("Against the Grain").

“Smell the flowers while you can.” (Author’s Note, "Close to the Knives: A Memoir of Disintegration", 1991).

The three silkscreened texts in "He Kept Following Me" are formatted like blown-up pages from a book. Their colors are close in value to the painted passages beneath, so some of the words are obscured and difficult to read. This is a ruse by Wojnarowicz to draw the viewer/reader closer for an extended look, or to “smell the flowers while you can.”

The blue text on the painting’s left side is an excerpt from Wojnarowicz’s essay “Losing Form in the Darkness,” written in 1978-79. It describes an anonymous sexual encounter in an abandoned warehouse along the Hudson River. It closes with these heartbreakingly tender lines: “In loving him, I saw great houses being erected that would soon slide into the waiting and stirring seas. I saw him freeing me from the silences of the interior life.” The righthand blue text is a dream fragment from “The Suicide of a Guy Who Once Built an Elaborate Shrine over a Mouse Hole,” in which Wojnarowicz wakes in a building occupied by vagrants, one of whom “…is soundlessly moving in this odd waltz-like dance…slowly turning in the rays of light.” “He kept following me,” the opening sentence of the green text, is the source of the painting’s title. The passage describes a clandestine encounter with the driver of a car parked outside the house in Bloomington where Wojnarowicz stayed (while he worked on the flower paintings downtown). Minutes later he walked up to his room on the second floor where “…the child of the family was asleep in the hall on the floor outside his room looking like he’d fallen off a sled.”

"He Kept Following Me" is an important late work by an artist at the height of his craft and creativity. Visually and conceptually stunning, it is charged with a range of emotion that has brought tears to the eyes of many viewers.

As director of University Galleries of Illinois State University in Normal, Illinois, from 1987 to 2018, Barry Blinderman curated many monographic museum exhibitions, including Wojnarowicz’s first retrospective. His articles on Martin Wong, Keith Haring, Andy Warhol, and others have been published internationally in museum catalogues, anthologies, and art magazines. He is featured in Chris McKim’s recent documentary film Wojnarowicz. Blinderman resides in Los Angeles, where he is writing a memoir entitled “The Curator’s Tale.”
More Information
+
Sell
Get a free appraisal for a similar object!
+
Register for
David Wojnarowicz
+
Buying from A-Z
+
Contact a specialist
Share