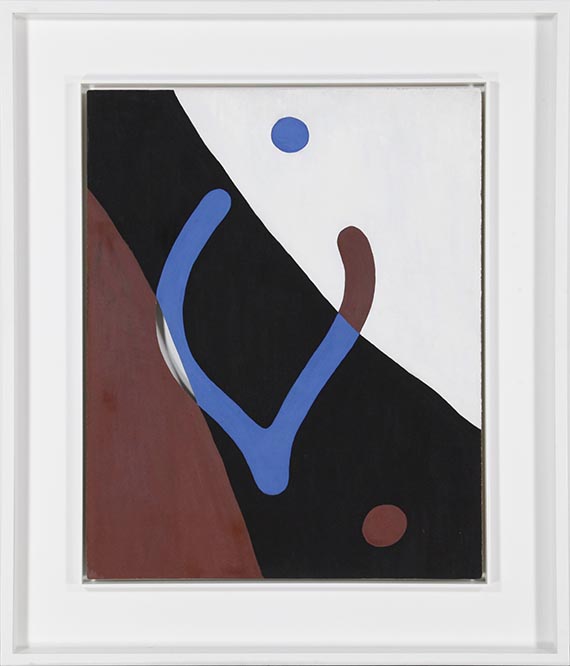 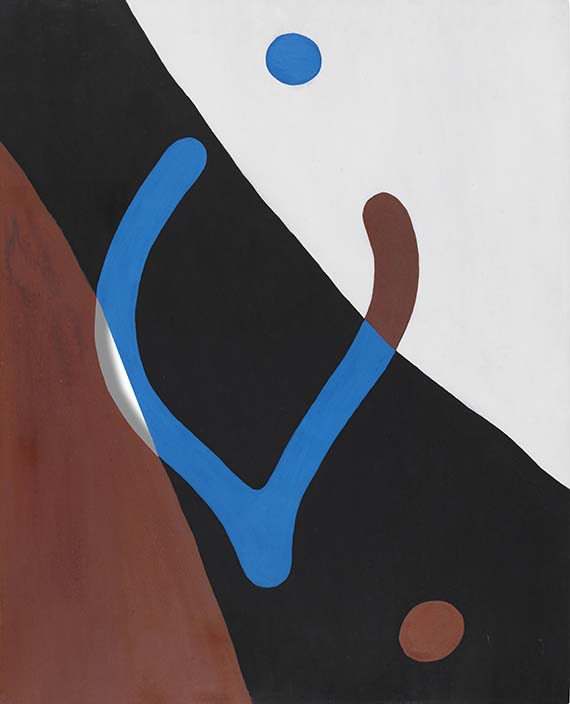 • Very early cardboard relief with slit cutout, characteristic of Arp's bimorphic style.
• On the cover of the Italian catalog of the grand traveling exhibition "Hans Arp - Sophie Taeuber-Arp" (1996-1998).
• Arp's paper works and wooden reliefs with cutouts were formative for Lucio Fontana's later "Concetti sparziali" and the "Shaped Canvases" of the 1960s.
• Arp's reliefs were on display at the Museum of Modern Art, New York, as early as 1936, a solo show at the MoMA in 1958, and a retrospective exhibition at the Solomon R. Guggenheim Museum, New York, in 1969 followed.

Hans Arp, whose amorphous visual language still exerts a particular fascination today, is an outstanding representative of the international avant-garde of the pre- and post-war period. Around 1915, first, still coarsely executed wooden reliefs emerged, at the same time Arp wrote simultaneous and automatic poems. He was involved with the Cologne Dada circle and the Paris Dada movement and worked with Schwitters on various publications. Arp found his characteristic shapes during a stay in Ascona in April 1917: "In Ascona I drew [.] branches, roots, grasses, stones [.]. I simplified them and united their nature in moving oval symbols of transformation and of forming a body. " (Hans Arp). Arp illustrated the constant changes in nature in reliefs, works on paper and sculptures. But it is precisely in his famous reliefs that Arp's extraordinary artistic progressiveness becomes particularly clear, as they expand the painting surface into three-dimensionality and thus already made an important contribution to the "open image" as early as in the 1920s. Arp anticipated one of the central endeavors of abstract post-war art, its ambition to delimit the image was expressed from the 1950s onward, among others, by Frank Stella‘s "Shaped Canvases" and Lucio Fontana’s "Concetti spaziali". Initially composed of roughly cut pieces of wood and cardboard, Arp's structures - as in the present early cardboard relief - became increasingly finer and with more precise lines from the mid-1920s. This bimorphic repertoire of forms soon became his artistic trademark and, by the 1950s the latest, had become an international avant-garde symbol of post-war modernism. As early as 1936, his reliefs featured in the exhibition "Cubism and Abstract Art" at the Museum of Modern Art, New York. Today the collection includes almost two hundred works from all creative phases. The first solo exhibition at the Museum of Modern Art followed in 1958, and in 1969, three years after Arp's death, the Solomon R. Guggenheim Museum showed a retrospective exhibition. [JS]
More Information
+
Sell
Get a free appraisal for a similar object!
+
Register for
Hans (Jean) Arp
+
Buying from A-Z
+
Contact a specialist
+
Hans (Jean) Arp Biography
Share