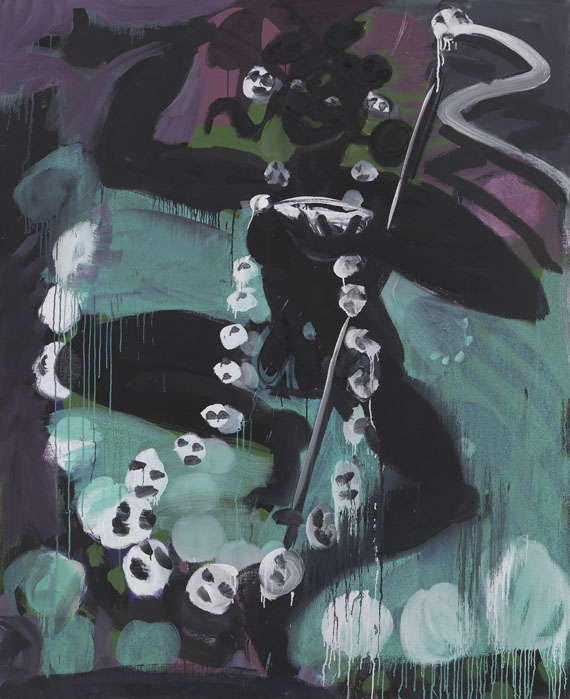 • Contrary to the then prevailing abstract and gestural-informal painting, Hödicke was one of the leading revolutionary representatives of New Figuration in post-war art.
• On countless journeys the artist gained impressions of distant cultures and religion which he then renders in his Berlin studio.
• In the 1980s he made depictions of, among others, the Hindu goddess Kali with skulls.
• In 1977 the artist participated in documenta 6 and in 1990 in the Venice Biennial.
• From 1974 to 2005 Hödicke held a post at the Berlin HdK (later UdK), among his students were, among others, Rainer Fetting, Salomé, Helmut Middendorf and Bernd Zimmer.
• In 2020 the Pinakothek der Moderne, Munich, and the Palais Populaire, Berlin, showed grand exhibitions.
• Hödicke's works from the 1980s are at, among others, the Berlinische Galerie, Berlin, the Pinakothek der Moderne, Munich, and the Städel Museum, Frankfurt a. Main.

PROVENANCE: Annina Nosei Gallery, New York (with the gallery label on the reverse).

"Hödicke travels a lot. He discovers customs, religions and rituals in other cultures. Later in the Berlin studio, the spirits of these worlds emerge from his memory and become part of his visual ideas. The goddess Kali becomes a demonic dancer surrounded by skulls. They are her viewers. But maybe she is just a striptease dancer dancing in front of deadheads. Hödicke leaves that unanswered. Hödicke painted a series of 'snake charmers', inspired by Rousseau's picture of the 'snake charmer' [Note: 1907, Musée d'Orsay, Paris]. Art history can also offer him stimuli that trigger a process in which he adapts the theme. [..] Rousseau's snake charmer is only significant as a thematic stimulus. Hödicke removed the women from the spatial context of the jungle landscape and turned them into an impressive nude figure - the primordial concept of femininity that conjures up and enchants not only the serpent but the world." (Erika Billeter, in: exhibition cat. K. H. Hödicke. Gemälde, Skulpturen, Objekte, Filme, Düsseldorf/Mannheim/Wolfsburg 1986/1987, p. 79)
More Information
+
Sell
Get a free appraisal for a similar object!
+
Register for
Karl Horst Hödicke
+
Buying from A-Z
+
Contact a specialist
+
Karl Horst Hödicke Biography
Share