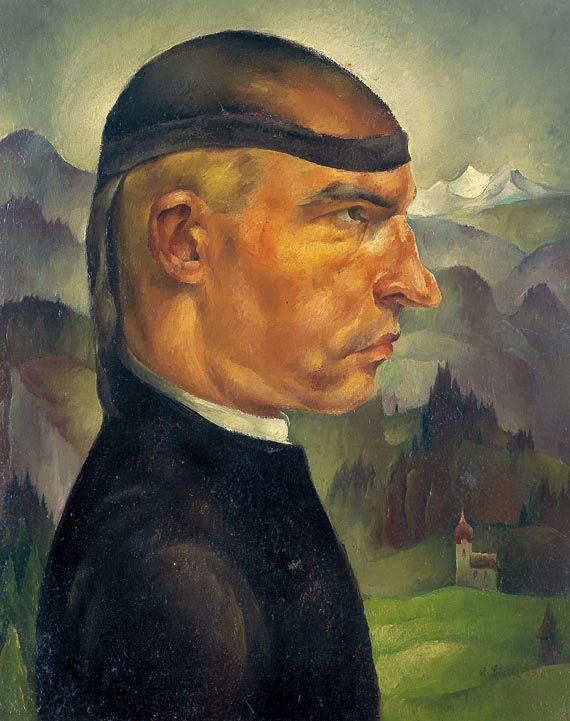 We are grateful to Roswita and Victor Pontzen, archive Albert Birkle, Salzburg, for the kind help support in cataloguing this lot.

Albert Birkle was born the first son of an artist family in Berlin-Charlottenburg and began an apprenticeship as a decorative painter in his father's business after world war I. Between 1920 and 1925 Birkle studied at the academy in Berlin and was admitted as the youngest member to the 'Berliner Sezession' and the 'Preußische Akademie der Künste', chaired by Max Liebermann. During his years of study Birkle formed a religiously-sociocritical realism with elements from the New Objectivity, which adopted cartoon-like moments especially in his wilful striking heads.
Birkle's realism, which has a special position in German painting of the twenties, has an unparalleled suggestive power in its concrete design and the often exaggerated expression which appears particularly in the portraits. The self-portrait of 1923, which is reminiscant of models in Italian Renaissance painting, takes on their classical structure. His realism, which can lead in details to aesthetic violations, here dominates a great composition, which demonstrates its monumentalism even in a small format. Supported by the hair net, which now seems anachronistic, an ascetic attitude is celebrated which reflects the artist's feeling about life in this time. Birkle, who repeatedly uses motifs from his South German origins, changed continually between two worlds. In Berlin, where he grew up, the marginal concept of the international metropolis became just as much his theme as the rustic dreaminess of the motifs from South Germany. In 1923, he was accepted as the youngest member of the Berlin 'Sezession' and some of the increased self-confidence relating to this may have flown into this portrait.
During the 1930s the tendency to pointed social criticism that had hitherto informed Birkle's work gave way to an atmospheric quality expressive of mood in his landscapes and industry-motifs. The same paintings, with which Birkle represented Germany at the Biennale in Venice in 1936, were removed before the opening of an exhibition at the Haus der Deutschen Kunst in Munich in 1937 and several other paintings were confiscated as 'degenerate'. In 1946 Birkle was naturalised in Austria and began to work on decorative cycles of windows with religious subject matter. Birkle is regarded as a pioneer of the modern 'dalle [flag] glass' technique, which he continued to develop. His late paintings and drawings are Expressionist in character. In them he looked back to 1920s and '40s motifs and sociocritical tendencies and he saw himself as a 'chronicler of his times'. Birkle died in Salzburg on 29 January 1986. [KD].

Colors in good and fresh condition. With tiny isolated retouchings in margins. Lower left corner with a small crack in color layer that has been skilfully restored.