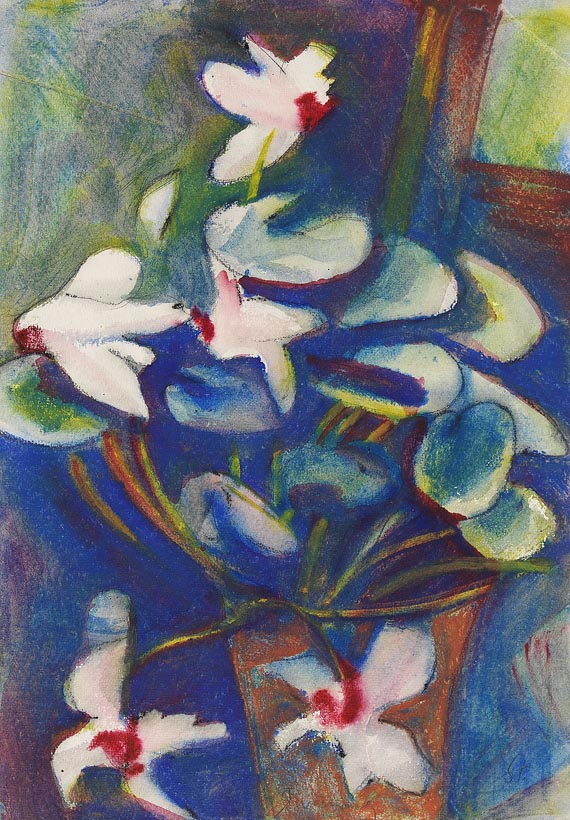 Alpenveilchen. Anfang 1920s.
Watercolour, gouache and coloured chalks.
Signed lower centre, inscribed "St." lower right. Once more signed and dedictated on the reverse. On laid paper. 38 : 26,9 cm (14,9 : 10,5 in), the full sheet. Born in Munich in 1881, Fritz Stuckenberg at first worked as a scene painter in Leipzig before attending both the Weimar Applied Arts School and the Munich Art Academy. Following a stay of several years in Paris, during which he showed work at the Salon d’Automne, Stuckenberg moved to Berlin, where he joined the “Sturm” circle and the “November Group”. In 1922 the painter settled in Delmenhorst. The Expressionist style shaped by what he had absorbed in his Paris and Berlin days yielded after 1920 to a Futurist-Constructivist style. Hence the plant motif in the present work already shows the tendency to abstract colour fields which detach themselves from a velvety, virtually undefined background. [NB]

More Information
+
Sell
Get a free appraisal for a similar object!
+
Register for
Fritz Stuckenberg
+
Buying from A-Z
+
Contact a specialist
Share