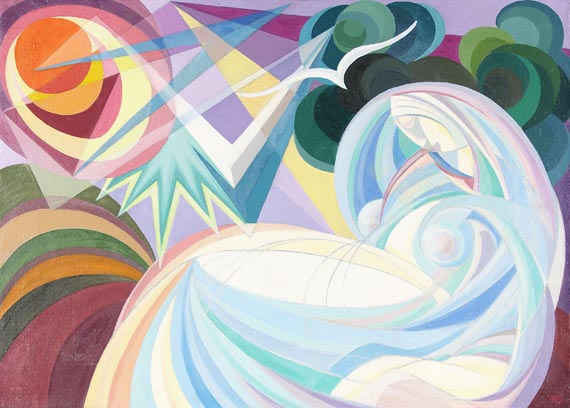 Woman at Noon. 1940s.
Oil on canvas.
Monogrammed lower right. 63 : 87,7 cm (24,8 : 34,5 in). Rosa Schafer, née Krombert, lived in Vienna until the early 1920s as a lyric poet and sculptor. In 1922 she married Ernst Schafer, a journalist, theatre and art critic, and moved with him to Munich. Their son, Wolfgang, was born a year later but the couple divorced in 1925 and Rosa stayed in Munich. In 1938, however, she emigrated to England, where she made a name for herself as a painter and printmaker. Not all that much is known about her work; her œuvre has yet to be discovered, a rewarding task for the future. The present composition of closed colour fields in an exquisitely subtle palette looks both delicate and sublime. The artist’s preoccupation with Cubist and even Constructivist tendencies is apparent. [BR]

Good overall impression. Partially with small traces of dirt and rubbing on the colour surface, partly with minor colour flakings, mainly on the lower left.