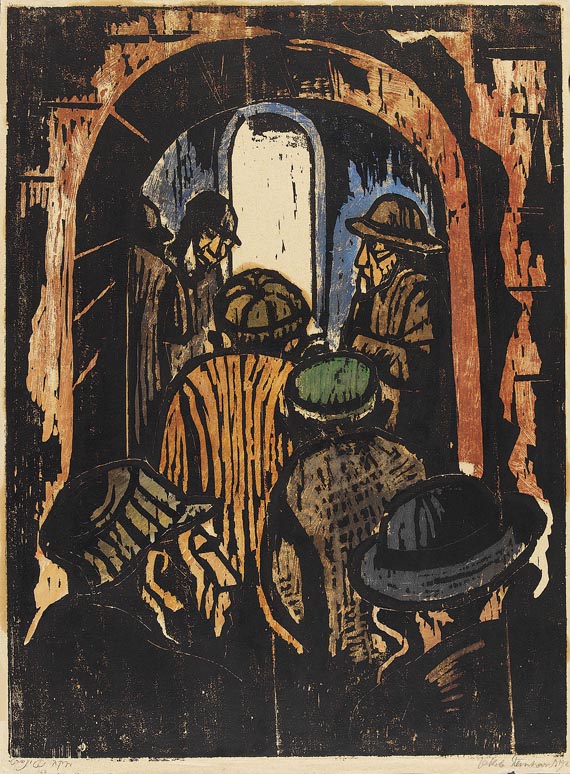 Eingang zum Haus der Lehrer. 1921.
Woodcut in colours.
Behrens 414. Signed, dated "1921" (differing from Behrens, who calls for 1925) and inscribed probably in Hebrew. One of 18 copies. On brownish paper. 64 : 47,4 cm (25,1 : 18,6 in). Sheet: 66,5 x 49 cm (26,1 x 19,2 in). Born in 1887 in what is now Żerków near Poznań (once Posen) in Poland, Jakob Steinhardt studied with Lovis Corinth in Berlin and was a close friend of Ludwig Meidner’s. Jakob Steinhardt completed his training as an artist with stays in Paris and Florence. After the First World War, which he spent in Lithuanian villages with large Jewish populations, Steinhardt addressed himself mainly to representing scenes from Jewish life. His expressively sympathetic prints memorably depict the resourcefulness shown by Jewish villagers in dealing with extreme and humiliating poverty. [NB]

More Information
+
Sell
Get a free appraisal for a similar object!
+
Register for
Jakob Steinhardt
+
Buying from A-Z
+
Contact a specialist
Share