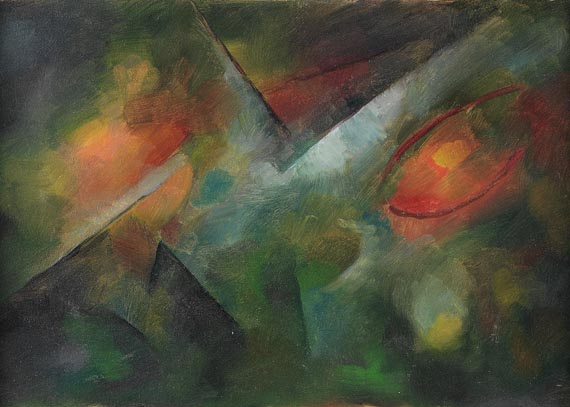 Komposition. Um 1916.
Oil on cardboard.
Signed and with a greeting on the reverse. Circa 26 x 37,5 cm (10,2 x 14,7 in). cm ( in)The works Muche produced around 1915, the basic conception of which is determined by structured forms. Those he did around 1916, by contrast, are informed by painterly romantic handling. Deliquescent forms, just barely recognisable, have become colour configurations which, unstructured as they are, lend this composition an elegiac quality. Here something is heralded that will become manifest in Georg Muche’s later work, especially in his drawings: a sophisticated technique ties an amorphus canon of forms into a composition whose delicate colour values determine the basic tonal quality. [KD]
EXPERTISE: This work's authenticity has kindly been confirmed orally by Prof. Dr. Magdalena Droste, Berlin
PROVENIENZ: Present from the artist for Arnold Topp in 1916.
Hedwig Sauerlandt, Brandenburg/Havel.
E. Hagemann, Brandenburg/Havel.
Private collection North Germany.

We are grateful to Prof. Dr. Droste, Berlin, for her kind support in cataloguing this lot
Good overall impression. Left edge with minimally retouched spots and two smaller, superficial splits, skilfully restored and barely affecting the overall impression. - Unexamined out of the frame.