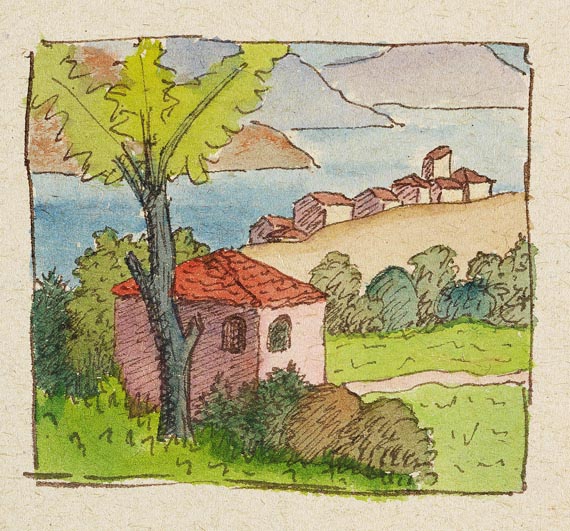 Ein paar Gedichte. 1935.
Sequence of 8 Watercolours over pen and India ink drawings with poems in typoscript in original wrapper.
Milek V/D 46, 54, 55, 98, 177, 445, 477 and 535 (for the poems). Signed, dated, titled and dedicated "Gruss für Ernst Graf" on the wrapper. On soft, fibrous wove paper (double sheets with centrefold) and on firm wove paper (wrapper) respectively. 16,8 : 17,3 cm (6,6 : 6,8 in), each the folded double sheet. Hermann Hesse’s typescripts accompanied by his watercolours are both a feast for the eyes and comfort for the soul. The high aesthetic value of these manuscripts, which Hesse arranged himself, is upheld in an unpretentious statement that is part of Hermann Hesse’s philosophy of life. His small watercolours embody the world as he sees it – as fresh as it appears in its natural simplicity. A touch of melancholy brooding on transience tinges almost all Hesse’s works. His watercolours are not always illustrations to poems; they should instead be viewed as belonging to the same context. [KD]

PROVENIENZ: Ernst Graf (organ player at the cathedral Bern between 1912 and 1937).