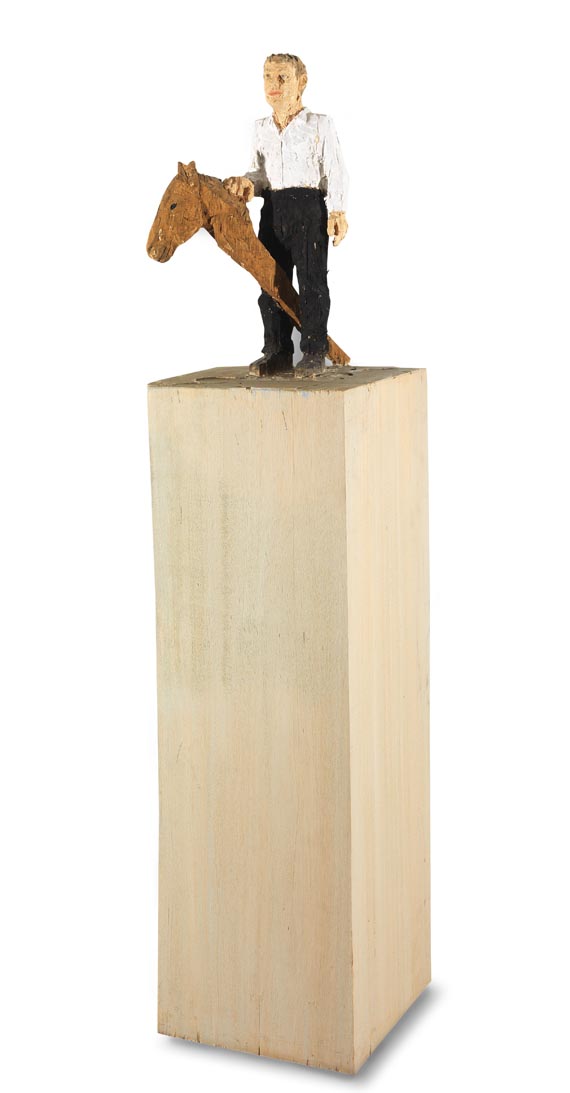 Mann mit Steckenpferd. 2001.
Wooden sculpture. Wawawood, polychromed.
176 : 46 cm (69,2 : 18,1 in). Stephan Balkenhol, born in 1957 in Fritzlar, Hesse, makes sculptures, which evoke archetypal behaviour patterns of human life and emotions. Balkenhol studied sculpture at the Hochschule für Bildende Künste in Hamburg under the strictly minimalist artist Ulrich Rückriem from 1976 to 1982. He was awarded two scholarships and then offered a teaching post at the Kunsthochschule Hamburg in 1988. In 1989 he went to Frankfurt to teach at the Städelschule until 1991. He has been teaching at the Staatliche Kunstakademie in Karlsruhe since 1992. Balkenhol's work reflects the searching of German artists during the 1980s for new means of expression and interpretations of every-day objects. Typical are his larger-than-life human figures and heads carved directly out of wooden blocks, which he has been making since 1982.

Balkenhol, who views wood as a living substance, works it with traditional tools. Hence grooves, clefts, splinters and cracks are left visibly attesting to the work process. Figures, heads, faces - with corporeal volume accentuated by colour markings - are paraphrased in a way that is close to portraiture yet also reveals a certain degree of “familial similarity”. “That little man in a white shirt and black trousers. No one remembers when he came. Did he come through the door? No one heard the doorbell ringing. No one let him in. He just stood there. In a relaxed pose - calm and firmly on his plinth. Just so - as if he had always been there.” (Müller-Hartmüller in: Stephan Balkenhol, Exhib. cat. Museum der bildenden Künste Leipzig, 2001, n. p.).

The figures convey no subjective emotions and are free of sociological or socio-critical references. They have a completely autonomous presence with a generalising vagueness, which exemplifies an existential awareness of life of post-modern man. [AS]