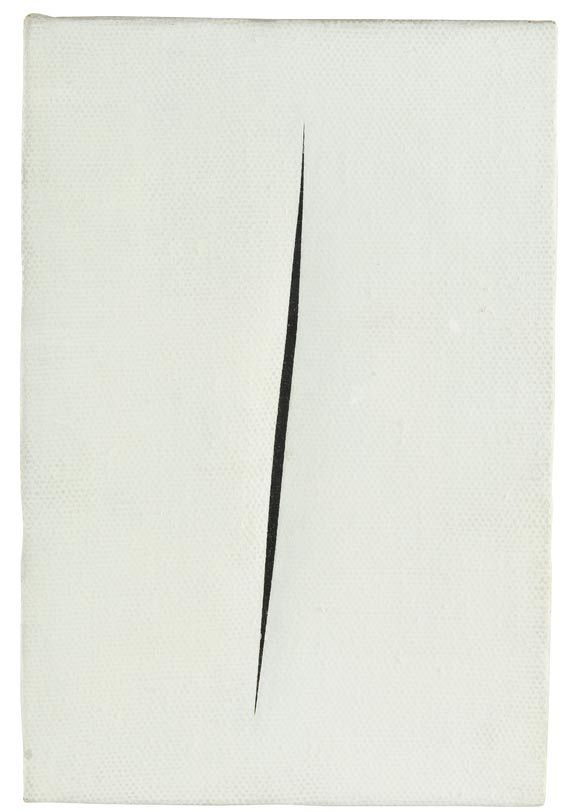 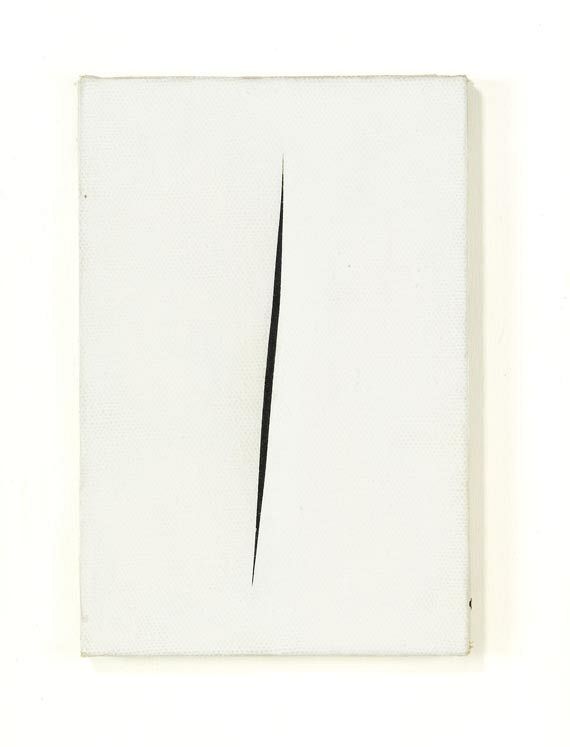 This work's authenticity has kindly been confirmed (e-mail) by the Fondazione Lucio Fontana, where the work is registered under the number 227/4.

Born in Rosario di Santa Fé in Argentina on 19 February 1899, Lucio Fontana was the son of an Italian sculptor. In 1905 the artist’s family moved to Milan, where Fontana attended a civil engineering school run by Carlo Cattaneo from 1914. After serving in the first world war, Fontana took his engineering diploma in 1918. He then studied sculpture at theAccademia di Brera Bildhauerei until 1930. In 1934 Fontana joined the Paris artists’ association known as Abstraction-Création and founded a Milan branch. The following year it published a manifesto on arbstract art and Fontana was given his first solo show at the Galleria del Milione in Milan. The artist returned to Argentina in 1939, where he was a co-founder of the Altamira private academy in 1946. With his students there, he wrote a Manifesto Blanco [White Manifesto ] in which he called for a synthesis of the genres and a rejection of conventional materials. On his return to Milan, Lucio Fontana formulated his quest for a new spatial art in his first Spatialist Manifesto (1948) and launched the Movmento spaziale. In 1949 he realised his first “Ambiente spaziale” at a Milan gallery. It was a precursor of the Environment. That same year Fontana produced his first perforated canvases, which, like all the works of this kind to follow, bears the title “Concetto spaziale” [“Spatial Concept”/ “Spatial Conceit”]. In 1958 the artist embarked on his celebrated gashed canvases, violent interventions with sharp knives in what are for the most part monochrome painted surfaces.
“My art is entirely shaped by purity, from that philosophy of nothingness, which is not the nothingness of destruction, but rather the nothingness of creation [...] And the cut especially [...] was not intended to destroy a picture; on the contrary, it was a dimension beyond the picture. [...].” (quoted in: Bettina Ruhrberg, Kritisches Lexikon der Gegenwartskunst, Munich 1993). By cutting into a monochrome white canvas, which seems to fuse on all sides with the white ground, Fontana also succeeded in infringing the boundaries of painting in the spatial dimension as well. The impression that space is being extended is, therefore, not only created on the edges of our picture but also through the gashed canvas, where the viewer’s gaze seems to be lost in the mysterious depths of what is apparently infinite space, since it has been heightened to a meditative space for the imagination. The canvas is no longer a support for the artistic imagination. Instead, in its material substance, it has become the focus of artistic interest, hence a projection surface for the viewer’s eye. With his Minimalist “Tagli”, Fontana contributed substantially to relieving the art work of its spatial confines. In contrast to all the gestural endeavours of Informel painting, Fontana declared the gesture of gashing a calculated artistic act that entirely eliminated fortuity.
Early in the 1960s Fontana combined his pictorial devices with parts in pastose paint that was often mixed with sand, in which he scratched and drew. Those works were followed by large spherical bronze objects. During that period of his life, Fontana was honoured with numerous solo and group shows. He regularly showed work at the Venice Biennale, for instance, took part in the 1968 Kassel documenta 4 and the touring exhibition mounted by the New York Museum of Modern Art (1966-68). Lucio Fontana died in Varese on 7 September 1968. [JS].