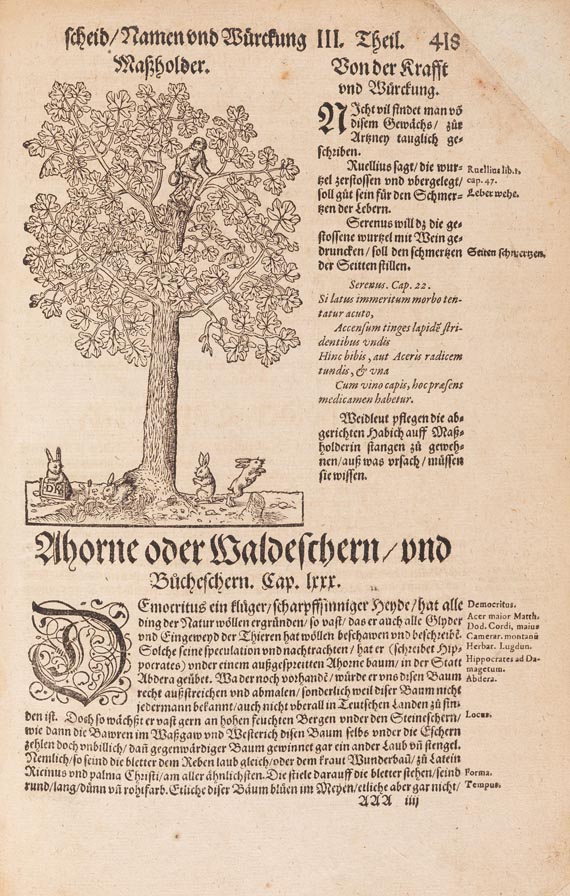 VD 16, B 6025 and B 6007. - Index Aurel. 120.601. - BM STC, German Books p. 130. - Nissen 182. - Muller 532, 266. - Cf. Weiss 427 and Horn/Arndt 21. - Not in Adams. - Fifth edition of the renowned herbal made by Melchior Sebitz, altogether the 14th and one but last. The fourth part (ll. 420-470) contains the Teutsche Speißkammer , in which numerous agricultural products, foods, drinks and spices are described. The Speißkammer was first released as a separate work in 1550 (cf. Cagle 85), as of 1577 Bock used this treatise in his herbal. "His humorous way of describing was quite popular, just as his genre-like figures, which his drawer made in the style of Weiditz, but even more after Meyer and Füllmaurer." (translation of quote from Nissen, Kräuterb. p. 44) - Lacking 3 preliminary leaves, among them the portrait and the armorial woodcut, as well as 18 ll. at the end. - Slightly stained in places and with isolated traces of damp, upper corners mended (isolated minor loss of printed matter), last 20 ll. remargined (loss of printed matter), few ll. with marginal blemishes, title mounted, some marginalia and ink scribblings. Binding somewhat stained and with traces of scraping in places, inner joints going.