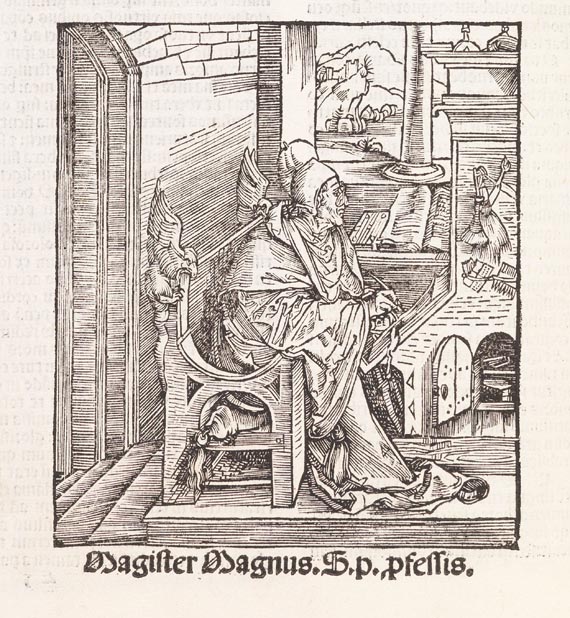 GW 4392. - Hain/Cop. 3205. - Goff B-688. - BMC II, 445. - BSB B 531. - Polain 908. - Proctor 2124. - Schramm XVII, 10. - Bibl. Schäfer 60. - Dodgson I, 263, 12. - Meder 278, XII. - Second Latin edition of the Revelation of Saint Birgitta of Sweden, first published in 1492, magnificent work from the Koberger workshop , made by Florian Waldauff by order of emperor Maximilian I. The nice woodcuts with scenes from the life of Saint Birgitta of Sweden and the popes. It is somewhat controversial to whom the woodcuts can be ascribed, as they were initially ascribed to Dürer, first by Passavant and later by Winkler, however, latest research by Schoch and Mende deprived him of the authorship. Dodgson had already explained comprehensively why he did not think that Dürer had made the woodcuts as early as in 1903. In 1931 Meder only ascribed one of the woodcuts (coat of arms of Maximilian) to Dürer, he assumed that Lukas Cranach made the crucifixion scene. It is believed, however, that drafts and sketches for the sheets may have been made by Albrecht Dürer (according to the catalog of the exhibition Meister um Albrecht Dürer ). Today’s research ascribes the works to a 'Birgitta Master' who is not identical with Dürer. "The illustrations in the book of Birgitta still make for the center of a controversial complex of authorship questions that has not been clarified up until today. The drawings and woodcuts can neither be ascribed to Dürer nor to one of his students, which is why they still have to accept a placeholder" (translation of quote from Schoch). - Lacking the blank l. g6 at the end, however, with the blank leaf H6. - Carefully cleaned copy. First and last leaf with thoroughly mended marginal blemishes, with rebacked worming in places of lower white margin. Outer joint slightly torn. Fine copy . 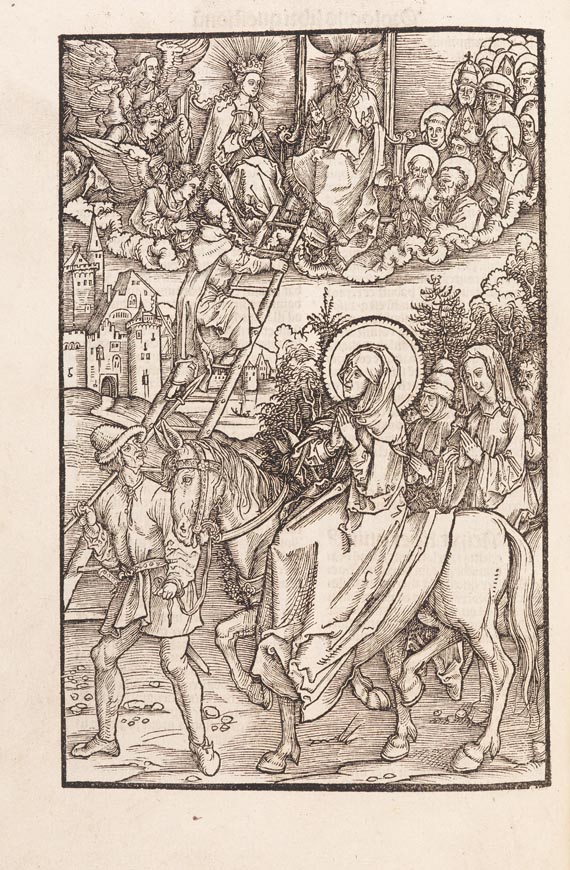