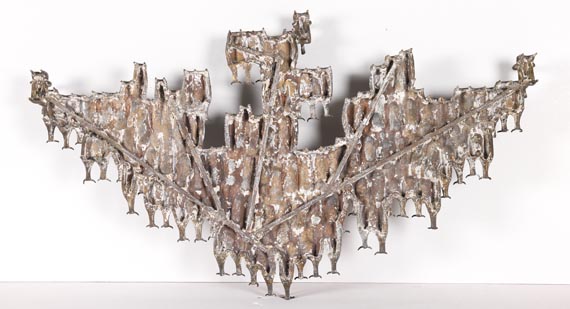 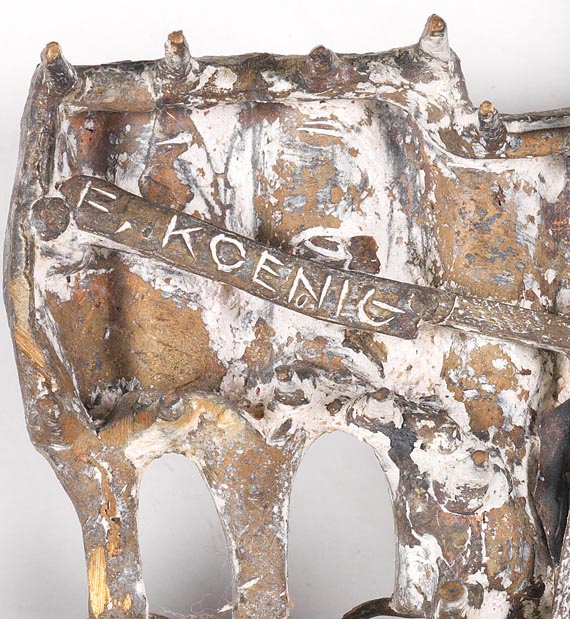 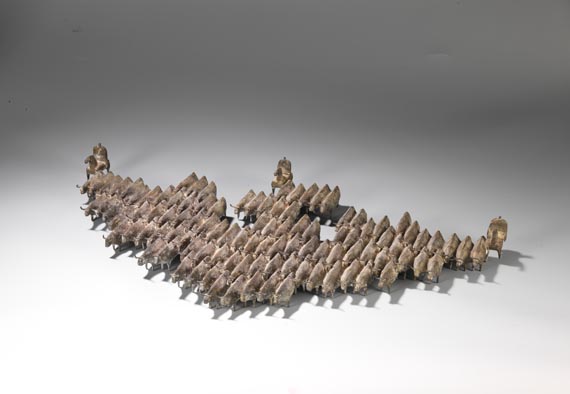 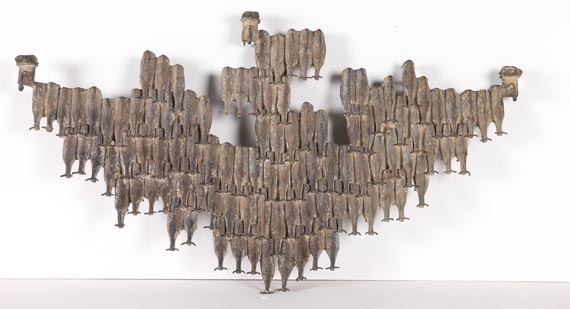 We are grateful to Dr. Dietrich Clarenbach, Gauting, for his expert advice.

Fritz Koenig was born the first child of Maximilian and Gertrude Koenig in Würzburg. After completing school he was drafted into the military and was sent to the eastern front in Russia. His early works already show notions of subjects that will re-occur in the course of his artistic creation: fear, loss and loneliness. Fritz Koenig studied sculpting at the Munich Academy of Art from 1945 to 1952 at Anton Hiller´s class, interrupted by a scholarship in France in 1951. For some time Koenig had doubts whether sculpting was the most appropriate form of expression for him, but Hiller affirms his intentions. Koenig has frequently been commissioned to create reliefs, fountains, graves and tombstones since the 1950s. Some topics were taken on, rephrased and interpreted over and over again. Koenig attempted to find new ways of expression for classic questions of sculpting, which is why he executed small sculptures and was particularly interested in the sculptural problem of drawing groups of several figures together within one single contour. The result of these analyses were the so-called 'Mengeplastiken' (Mass Plastics).

After sculptures of interlocked riders, which were made in the mid 1950s, the wish to depict herds of animals became manifest in Koenig. In 1956 the artist traveled to the Camargue and made plastics under that title in the same year. The clearly contrasted uniform bodies of the animals are formed by a rhythmical arrangement to a gestalt-type whole. The subject of the herd of cattle with riders fascinated the artist so much that he again and again modeled groups in ever larger variations. This type of "Mengenplastik" (Mass Plastic) becomes characteristic of Koenig, "it was acknowledged and treasured both by art critics as well as by the audience. The different variations of [..] 'Camargue' put across how a diversity of forms can be tamed so that the overall form is more than just the sum of its miniature, statuette-like components." (Translation of quoted from Peter Anselm Riedl, Einführung, in: Clarenbach, p. 11).

Koenig spent six months as a scholar at the Villa Massimo in Rome in 1957. Among all his impressions in the "eternal city", the motif of the quadriga was the most important. Other international successes followed, such as the artist's participation at the 29th Biennale in Venice in 1958 and at the II. documenta in Kassel a year later. In 1964 Koenig was appointed to the chair for plastic design at the Technische Universität Munich. The same year he participated in the documenta 3 in Kassel and the XXXII. Biennale in Venice. From 1967-1971 Koenig was working at the 'Große Kugelkaryatide' commissioned by the Port Authority New York for the fountains of the Trade Center in Manhattan. The monument of the Federal Republic of Germany in the former concentration camp Mauthausen was erected in 1983. This was followed by exhibitions at the Neue Pinakothek in Munich (1988), at the Academy of Arts in Berlin (1989) and at the Galerie Pels-Leusden in Berlin in 1992. Prof. Fritz Koenig and his wife Maria donated their collection to the city of Landshut in 1993. Fritz Koenig was awarded the "Bayerischer Maximiliansorden für Kunst und Wissenschaft" the same year. The "Skulpturenmuseum in Hofberg" opened in 1998 with the retrospective exhibition "Fritz Koenig. Skulptur und Zeichnung" 1942 - 1997". In co-operation with the Bayerischer Rundfunk the director Percy Adlon produced the film 'Koenigs Kugel. Der deutsche Bildhauer Fritz Koenig im Trümmerfeld von Ground Zero' (Koenig’s Orb. The German Sculptor in the Debris Field of Ground Zero) in 2001. [SM].