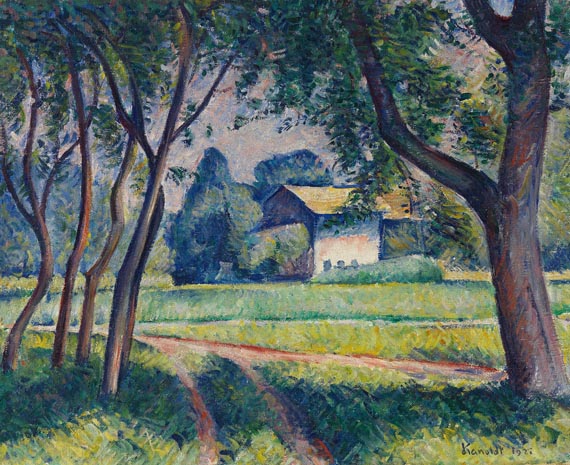 The artist found the subject of this work in the vicinity of the Chiemsee, presumably in Übersee/Feldwies, where he was staying for some time in 1921. During this stay he made several landscape which are quite similar as far as the choice of motif is concerned, however, they largely differ in form as most of them were more compact. Kanoldt's work show influences of all important artistic tendencies of the early 20th century. In this work he took on the style of the late impressionists, which makes this small landscape depiction so special, since the impressionist way of applying the paint is rather odd for the time this work was made. It was not before the 1930s that Alexander Kanoldt extensively employed this method in his late work. In the background of this landscape scene one of the houses that have been stylized like geometric cubes, a feature that will become characteristic of his landscapes later on, can be seen. The artist masterly combines the interpretation of nature in an easy stroke of the brush with the seemingly contrasting Cubist style. This way Kanoldt managed to capture the landscape's character and the soul of this beauty patch. [SM].