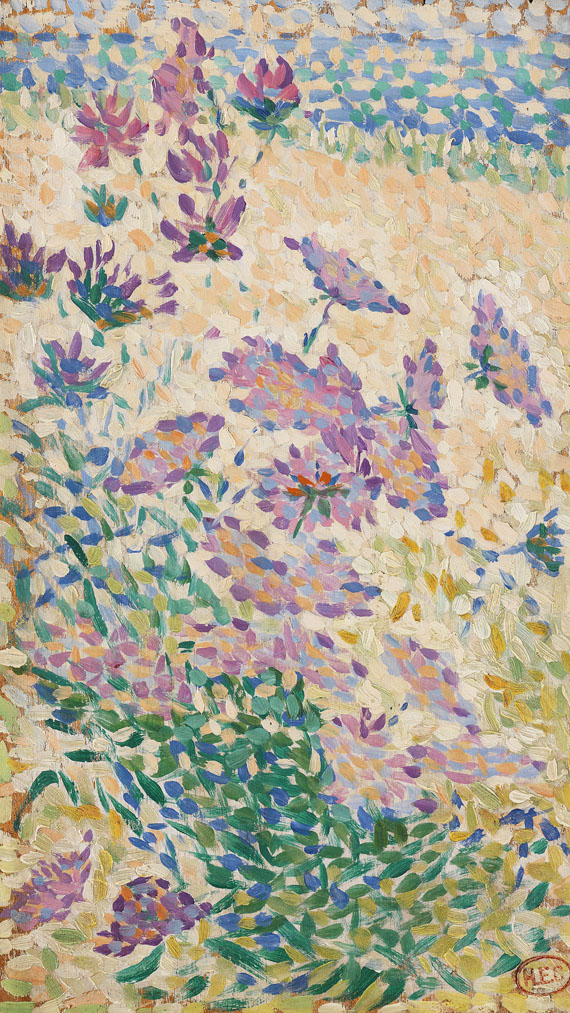 The work will be included into the forthcoming catalog raisonné of paintings, which is currently prepared by Patrick Offenstadt, Paris. Accompanied by a written confirmation dated 6 December, 2011.

Henri-Edmond Cross was born in Douai in 1856 and received art training in Lille. In 1881 he moved to Paris showed his gloomy realist works in the “Salon des Artises français”. It was on a journey to the South of France in 1883 that lightened his palette considerably and he developed an Impressionist style of painting. Fascinated by the Mediterranean surroundings, an enthusiasm for landscape painting awoke in him. It was also the time that Delacroix abdicated his family name, in order to avoid being confused with Henri-Eugène Delacroix, called himself Henri-Edmond Cross from that point on. In 1894 he was one of the founding fathers of the Salon des Indépendants, where he met George Seurat and Paul Signac. He regularly showed works in both the ”Salon des Artises français“ as well as with the ”Indèpendents“. He was also invited to participate in the ”Salon des XX“ in Brussels (1889). A portrait of his later wife from 1891 was his first picture in the pointillist-divisionist manner and made him a member of the Neo-impressionists. Because he chronically suffered from rheumatism, Cross moved to the Mediterranean coast near Saint Tropez the same year, however, he stayed in close contact with cultural life in. His works were shown in Paris as well as abroad.

He and Paul Signac, who also lived in Saint-Tropez were close friends and in intensive artistic exchange. Together they examined the ”interplay of light in color in sandy bays under Mediterranean sun […]. He captured this modulation in soft harmonies and with colors he had mixed with white, applying them to the canvas in small round and even strokes of the brush.“ (Françoise Baligand / AKL). The small plate ”Skabiosen“ (Scabiosa), executed in soft pastels, is a wonderful example of how Cross employed the southern light in his paintings from around 1892-94.

Cross continued painting in a pointillist manner after 1895, however, he used stronger colors and and a broader duct. In 1898 the first German exhibition of Neo-impressionism took place in the Berlin gallery 'Keller und Reiner', with, among others, works by Cross. Over the following years further exhibitions in Paris, Brussels and Berlin, but also in Hamburg and Weimar increased the popularity of his works. On two journeys to Italy, Cross was particularly enthusiastic about Venice and the light of the city on the lagoons, which inspired him to make several paintings. He reached the peak of his artistic creation in 1905 with a much celebrated solo show in the Paris gallery Druet. His last solo show was at the gallery Bernheim, also in Paris, in 1907. In 1910 Cross died of cancer in Saint-Clair on the Côte d'Azur. [CB].