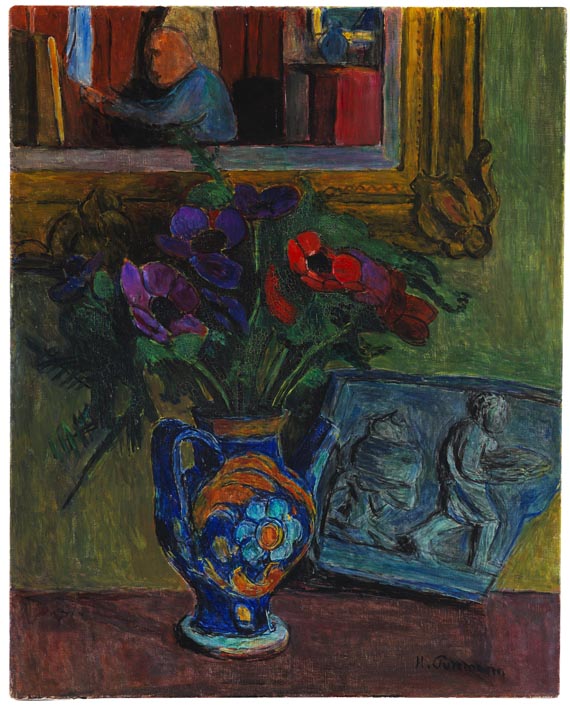 Hans Purrmann served an apprenticeship as a house painter in his father's business before beginning his studies at the Karlsruhe School for the Applied Arts in 1897-99. He continued to study during the winter months at the Fine Arts Academy in Munich at first at Gabriel von Hackl's drawing class and then at Franz von Stuck's painter's class. The young Purrmann went to Paris in 1905, where he met Henri Matisse in the circle of German painters in the Café du Dôme. In 1908 and partly at the suggestion of Sarah Stein, he founded the 'Académie Matisse', with Friedrich Ahlers-Hestermann, Franz Nölken and Mathilde Vollmoeller, who would become his wife, as his first pupils. That year Purrmann accompanied Matisse to Germany, where he also spent time twice in 1909/10. The outbreak of the first world war caught him in Beilstein, Württemberg, where he stayed for two years, while his possessions in Paris were confiscated. In 1916 he settled in Berlin, where he participated regularly in exhibitions of the ‘Free Secession'. At the suggestion of Liebermann and Slevogt, Purrmann was made a member of the Preussische Akademie der Künste (Prussian Academy of the Arts). The academy wanted to appoint him a professor, but he refused. He also went on several study trips to Italy in the 1920s, where he copied Old Master paintings. In 1935 Purrmann moved to Italy where he was honorary head of the Villa Romana in Florence. His art was classified ‚degenerate' in Germany, his works were removed from public museums and he was banned from exhibiting. These facts weakened his position in Florence. Purrmann's flat in Berlin was destroyed in 1943 and, after the fall of Mussolini, the artist fled to Switzerland. He settled at Montagnola in Ticino, where he made friends with the writer Hermann Hesse. In 1946 the artist resumed his publicist work. The following years were coined by numerous exhibitions and several honors.

This “Stillleben mit Anemonen, Relief und Spiegel mit Selbstbildnis“ remained hidden from the public for a long time. It was not before 2005 when it was given to the Purrmann Museum in Speyer as a loan and thus accessible for a wider audience. In Purrmann‘s artistioc creation our work occupies a special position. The thoroughly chosen objects, the mug with charming ornaments and the ancient relief fragment, can also be found in other works from the 1960s (cf. Lenz/Billeter 1954/10-12 and 1957/36-38). But it is only in our still life that Purrmann integrated a self portrait in such a unique manner as a scheme-like mirror image. This way the artist gets into direct contact with the observer and adds an unusual depths and vibrancy to the painting. This is increased by the harmonic coloring. His friend Herrmann Hesse was also impressed by Purrmann‘s keen sense of composition and colors. In 1954 he wrote the poem “Alter Maler in der Werkstatt“ (Old Painter in the Studio) and dedicated it to his friend. Purrmann seemed to have been inspired by Hesse‘s rhymes, as they are a detailed account of our painting: Because we encounter both the artist’s face in the gold-framed mirror as well as the bellied blue mug with the bouquet of colorful anemone.

The artist was honored with great approval in his lifetime. On occasion of his 80th birthday his by then largest one-man show took place at the Kunstverein Hanover. Six years later Hans Purrman died of pneumonia in Basle on 17 April 1966.KH].