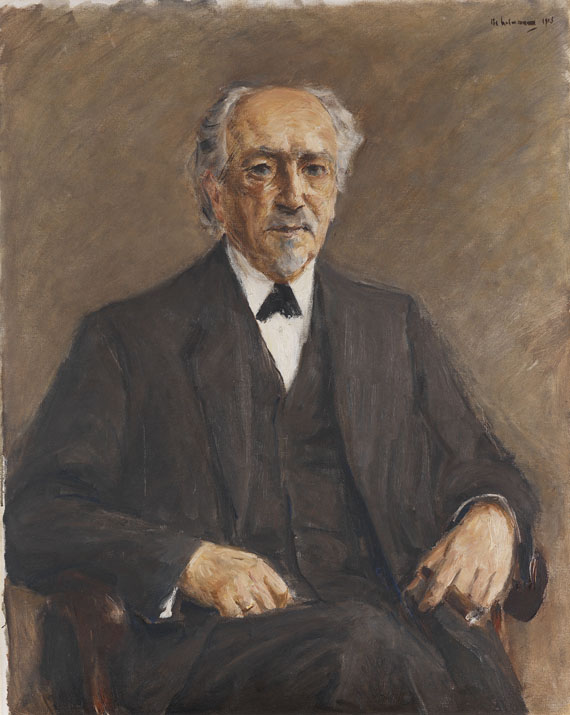 EXHIBITION: 3rd exhibition of the Free Secession, Berlin 1917, no. 102 with illu.
Max Liebermann, Kunsthalle Bremen 1954, no. 62a (there with different measurements).

Max Liebermann began capturing his immediate environment on paper at the age of nine. When the renowned Berlin painter Carl Steffeck saw drawings by the fifteen-year-old he recommended that the boy's talent should be encouraged as much as possible - much against his parents ideas. Steffeck gave Liebermann his first drawing lessons and encouraged him to attend the Weimar Akademie. Liebermann studied in Weimar for three years until 1872. A trip to Düsseldorf in 1871 took the young artist to Mihály Munkácsy, a Hungarian painter who lived here. Liebermann was inspired by Munkácsy's Realism. Still under this impression, Liebermann painted his first large painting, 'Die Gänserupferinnen' (Girls plucking Geese). The unadulterated realism of this work, which was much rejected among the critics, was to become typical of Liebermann's art. He spent the years 1873 to 1878 in Paris and the artist colony of Barbizon. Here he studied the art of Millet, whose paintings of farm workers had a strong influence on him. A first sojourn in Holland in 1871 was followed by regular trips to the Netherlands, where he discovered suitable motifs for his most important works. His striving to elevate the life and work of the simple man to the realms of art in an unpretentious simplicity was not generally accepted. Liebermann continually fought for acceptance. Only after turning towards motifs and scenes of bourgeois life did he become the celebrated and sought after painter of the liberal bourgeoisie of the turn of the century. He spent the years 1878 to 1884 in Munich and then returned to his native town Berlin in 1884. Liebermann was an important personality not only as an artist but also as an art politician. At the beginning of 1892 he was a member of the 'Erste Sezession Deutschland', an organisation which he chaired in Berlin from 1898 to 1911. His home town honoured Liebermann by appointing him professor at the Königliche Akademie der Künste.

Among Max Liebermann’s vast creation of portraits, works commissioned by members of the Berlin society occupy a remarkable rank. Max Liebermann was committed to this task with his very own feeling for style. The representative portrait is a relict, initially one of a royal tradition, later a bourgeois convention and accordingly subject to certain stylistic principles that can also be found in our portrait. The depicted person tries to hod the appropriate posture, following an inner need for representation. The seated pose in the armchair calls reminiscence of early portraits of clerical or political dignitaries. And yet, Liebermann‘s commissioned portraits also show a very distinctive style. He renders an exact depiction without extenuations, he paints just what he feels and sees in the very situation. It is particularly the graded color values that characterize this portrait, adding a remarkably special aura.

Later, from 1920 to 1932, he was the president of the Preußische Akademie der Künste. Liebermann retreated from the political world in the last years of his life. He became severely ill in 1934 and died three months later in isolation in his Berlin apartment. [KD].