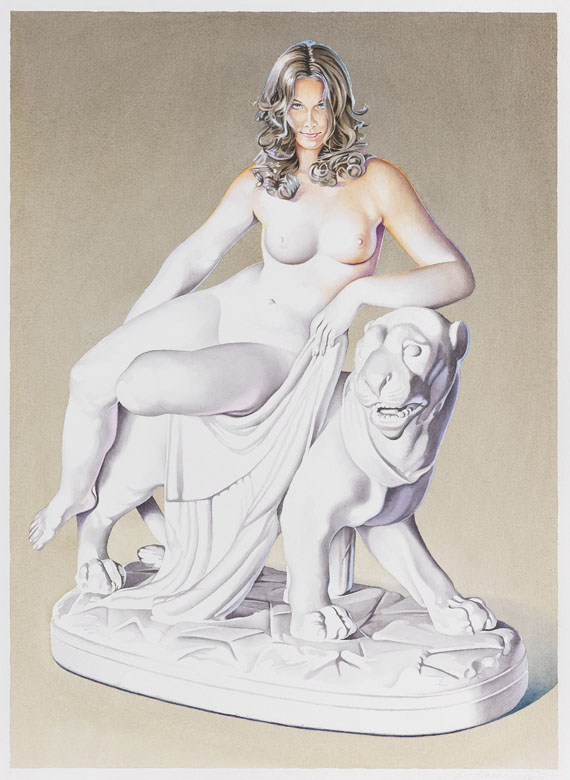 In 1954 Ramos starts studying art and art history at Sacramento Junior College and California State University under Wayne Thiebaud. In 1958 he takes up a teaching post at Elk Grove High School and at California State University. The subjects of his own works of the early sixties are taken from the world of pictures of comics. After participating in the exhibition "Pop Goes the East" at the Contemporary Art Museum in Houston in 1963, the artist establishes himself as one of the main representatives of pop art besides Warhol, Lichtenstein and Rosenquist with the first exhibition of his own at Bianchini Gallery in New York the following year. In the mid-sixties, Mel Ramos turns to the depiction of single female figures: Pin-up girls from advertisements and magazines are draped over painted commercial articles to parody the trivial and glamorous gestures of the advertisement industry, which tries to influence the consumer's choice by such marketing strategies. In 1967, there is another single exhibition at the Museum of Modern Art in San Francisco. In 1972, the artist presents his works at the Utah Museum of Fine Arts in Salt Lake City, followed by the exhibition "Pop Art" at the Whitney Museum of American Art in New York in 1974. In 1977 Ramos can be seen in a retrospective at the Oakland Museum of California. In 1980 he takes up a chair at California State University in Hayward. At this point the painter gets interested in self portraits and landscape painting. In 1986 Ramos gets the National Endowment for the Arts Visual Artists Fellowship Grant. In that year he participates in an exchange of scholarship holders between America and France, followed by travels to Sicily and Tenerife in 1987 and 1991.
From the mid-1960s, Ramos makes erotic depictions inspired by the world of ancient gods. As of 1999, he picks up a theme from Greek mythology: Galatea, whose story has been bequeathed in the metamorphoses by Ovid, is in the centre of his works. The beginning of the series of works is marked by "The transfiguration of Galatea". Half ancient marble statue, half pin-up girl from the present, Galatea seduces the observer in her lascivious pose. Ramos' mastery as a painter of watercolors shows in this work, in which he achieves to depict timeless female beauty with his characteristic subtle sense of humour.
Since 1992 the artist has been living and working in California and Spain. His works are in possession of many important museums and public collections. [DB]