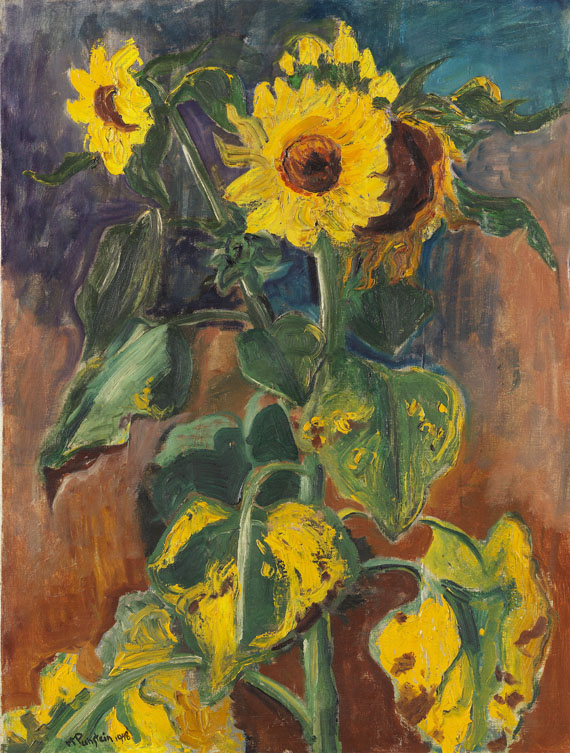 Max Pechstein's artistic talent was discovered and encouraged at a very early age. His conventional career, first as an apprentice with a Zwickau painting master, then at the Dresden Kunstgewerbeschule and finally at the Dresden Akademie under the decorative painter Otto Gußmann, provided Pechstein with a sound craftsmanship. His ceiling painting at the Dresden Arts and Crafts Exhibition in 1906, with such an unconventional color scheme that the organisers had it sprayed with grey paint to soften the colors, attracted Erich Heckel's attention. He then invited Pechstein to join the artist group ,Die Brücke' which had been founded the year before in opposition to Impressionism. The group's aim was to "attract all revolutionary and restless forces" (Schmidt-Rottluff) and an emphasis of the power of color in painting. In this environment Pechstein's Expressionist style developed further, concentrating on elaborating the focal point of the painting with a sparse painting technique. Pechstein moved to Berlin in 1908 and became a co-founder of the ,Neue Sezession'. He painted figures, still lifes and landscapes in a moderately Expressionist style. Perhaps it was this, which lead to the artist's early and continuing success. From 1945 Pechstein taught at the Berlin Akademie der Künste. Before that time, during the Third Reich, he was slandered as a "degenerate" artist.

Since Vincent van Gogh had paved the way for the sunflower to be worthy depicting, this unusual flower, that is also a crop plant, has been encountered by painters with almost ritual worship. While by then the rose had always challenged painter's ambitions with its delicate petals, the sunflower seems to be the epitome of the changing perspectives. The picturesque furor that already resonances in Van Gogh's sunflowers should not miss its effect and subsequently the sunflower images of contemporaries and future generations were measured on this basis. Max Pechstein, who turns to be quite innocuous subjects in the thirties, also due to the constraints of time, remains faithful to his own expression in his sunflower paintings. Based on the work of van Gogh, he opts for own interpretations, which, both in terms of duct and conception, pursue his own ideas. Pechstein's stroke of the brush is shaping. The blossoms of the free-standing flowers with large leaves in our picture are seen against a background of subdued colors, which integrates the flowers in the composition, instead of isolating them. The discrepancy between formal rigor and pictorial freedom is mitigated here in a particularly felicitous manner.

Apart from paintings his oeuvre includes more than 850 woodcuts, lithographs and engravings. [KD].