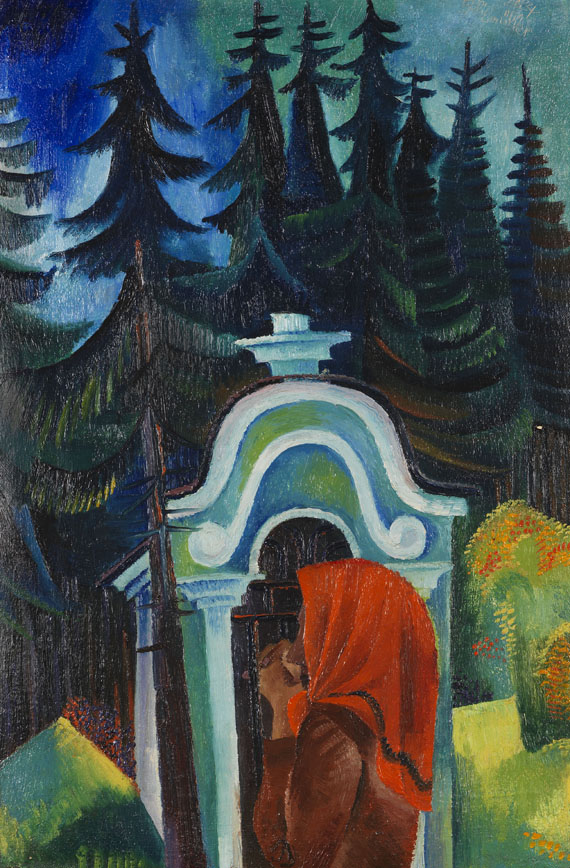 After attending drawing classes at the Dresden Kunstgewerbeschule [School of Applied Arts] for one year, Felixmüller enrolled in the private school of the artist Ferdinand Dorsch in 1912 and, in the same year, the class of Professor Carl Bantzer at the Königliche Akademie [Royal Academy] in Dresden, where he began his training as a painter. When Felixmüller left the Academy in 1915 he worked as an independent artist in Dresden, but also spent much of his time in Berlin, where he painted in Ludwig Meidner's studio. Here he also worked for Herwarth Walden's journal 'Der Sturm' as a graphic designer. Together with the book seller Felix Stiemer the artist founded the art and literature journal 'MENSCHEN' in 1917. He was responsible for the graphic design of this journal. He had exhibitions at Hans Goltz' gallery in Munich and, together with Heckel, Kirchner and Schmidt-Rottluff, at the Galerie Arnold in Dresden.

Felixmüller moved to Dresden in 1918. He was a founding and board member of the 'Dresden Sezession' and a member of the 'November Gruppe'. At the same time he worked for various journals (such as 'Die Sichel', Regensburg; 'Rote Erde', Hamburg) and published his own texts, such as his autobiography 'Mein Werden' (Kunstblatt), or his thoughts about 'Künstlerische Gestaltung' [Artistic Design] (Kestnerbuch, Hannover). Felixmüller's early work is strongly influenced by Expressionism which he understood in a socio-critical context and transformed into his own expressive realism. The powerful lines of his woodcuts depict scenes of every-day life. There was a change around 1930, evident in increasingly genre-like, narrative subjects and a calmer pictorial language.

40 works by Felixmüller were included in the 1933 exhibition of 'Degenerate Art' in Dresden. The artist moved to Berlin-Charlottenburg in 1934, hoping that the working environment would be more liberal here. 151 of his works in public collections were confiscated in 1937. When his Berlin domicile was destroyed by a bomb in 1941 Felixmüller sought refuge in Damsdorf in the Mark. He moved to Tautenhain in 1944, but was called-up for military service in the same year. He returned to Tautenhain in 1945 after a brief period as a prisoner-of-war in Russia. He was appointed professor at the Martin-Luther-University in Halle in 1949, teaching drawing and painting in the faculty of education. Felixmüller returned to Berlin after his retirement in 1961. Numerous exhibitions have been dedicated to the artist between the end of the war and the artist's death in both parts of Germany as well as in Paris, Rome, Bologna and Florence. [KD].