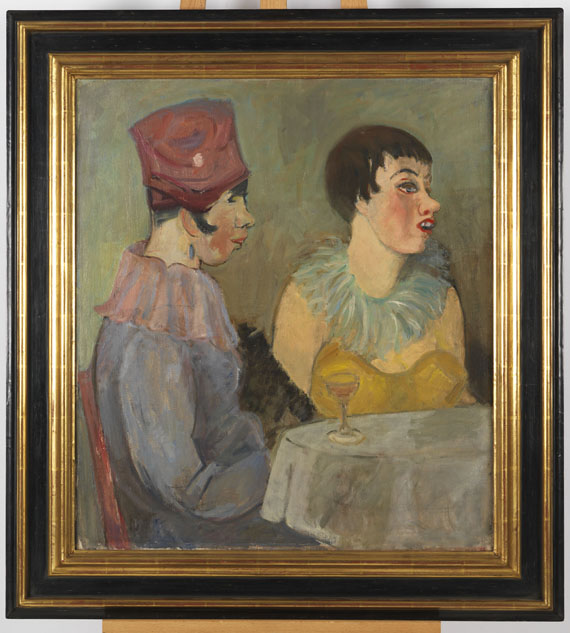 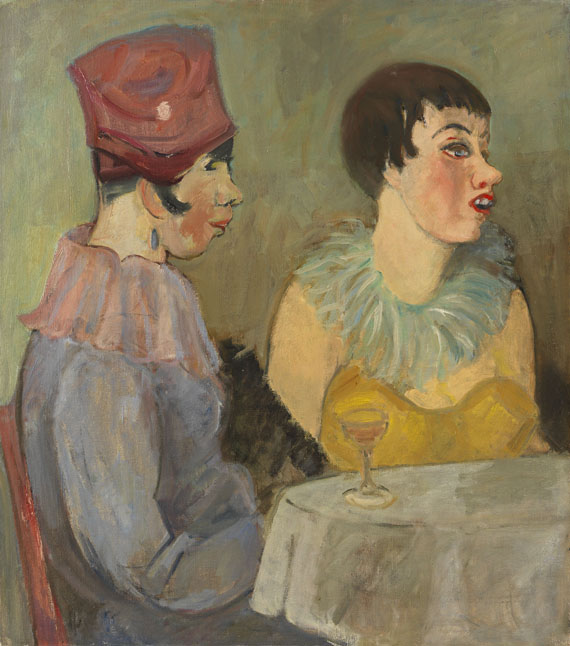 Georg Tappert discovered fine art after an apprenticeship as a tailor and two years spent working for different tailor's businesses, when Max Liebermann, the president of the 'Berliner Secession' acknowledged that he "possessed a talent which was worth developing". The young Tappert took this letter of recommendation to Ludwig Schmitt-Reutte at the Academy in Karlsruhe. When Tappert went to Saaleck Castle near Weimar for two years in 1903 to work as Paul Schultze-Naumburg's assistant he missed the liberal atmosphere of the Karlsruhe Akademie. Tappert joined the 'Deutscher Künstlerbund' when it was founded in 1904 by merging all the German Secession groups. The artist's early works from this period are influenced by Gauguin, Cézanne and Munch. Before moving to Worpswede in 1906 he spent one year in Berlin as an independent painter and graphic artist, exhibiting his works in his first one-man exhibition at Paul Cassirer's gallery. In Worpswede, where he met Paula Modersohn-Becker, who influenced his own work considerably, Tappert founded his own art school in 1907. One of this school's most famous pupils was Wilhelm Morgner. When Tappert moved back to Berlin in 1909, he exhibited works at the association's exhibitions. He continued teaching art together with Moritz Melzer at the newly founded 'Schule für freie und angewandte Kunst' (School of fine and applied arts).

The rejection of works by 27 artists - including Georg Tappert - submitted to the 20th 'Sezession' exhibition led to the foundation of the 'Neue Sezession 1910' and its first exhibition in May. Tappert was the first chairman of this association, which was presided over by Max Pechstein. The association's survival until 1914 is largely owed to Tappert's commitment in this function. A demand for free and varied art resulted in the Berlin exhibition of the 'Juryfreien' in 1911. Tappert exhibited works here as well as at the 'Sonderbund' exhibition in Cologne in 1912. He taught at the Königliche Kunstschule and the Kunstgewerbeschule in Berlin-Wilmersdorf until 1915 when he was drafted into the war. In 1918, the foundation of the 'Novembergruppe' was an important step in Tappert's artistic development. Tappert enthusiastically supported the group's call for new art forms and a very close intermingling of art and the ordinary population. The artist resumed his teaching at the Staatliche Kunstschule in 1919 and was appointed professor at the age of 41 and taught at the Reimann-Schule.

Hitler's rise to success meant a long period of ostracism for the artist. He was dismissed from his teaching post in 1937 and banned from any artistic work, forcing him into an inner emigration. When his house was destroyed only some of his works could be rescued; more than 100 paintings were destroyed. In 1945, at the age of 65, Tappert dedicated his time to the reconstruction of the Hochschule für Kunsterziehung.Georg Tappert died in Berlin on 17 November 1957.