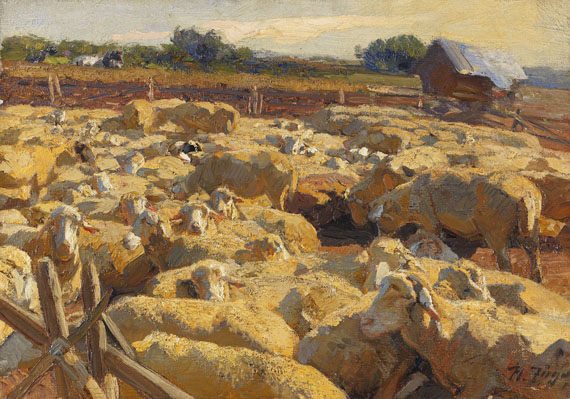 Zügel's drawing talents were discovered and encouraged as early as the 1860s while the artist was still at school. This enabled the young artist to join the Stuttgart Kunstakademie in 1867 and the Munich Akademie two years later, where he interacted with the animal painter Anton Braith and Gotthard Kuehl. He believed, however, that Karl von Piloty's ways of teaching were not particularly beneficial to his artistic development and decided, influenced by the school of Diez, to work independently. At the World Exhibition in Vienna in 1883 he was awarded the great gold medal for his painting 'Schafwäsche' (Sheep Washing). Important museums acquired works by the young artist already during the 1880s. Inspired by trips to Holland and Belgium Zügel began painting landscapes during the 1890s. He was very impressed by the special light effects on the coast light from then on light became the deciding element in his producing. A short period teaching as a professor at the Akademie in Karlsruhe (1894/95) was followed by Zügel's invitation to teach in Munich (1895-1922).

The artist left an extensive œuvre of drawings and paintings depicting mostly landscapes or animals. As an animal painter Zügel continued the traditions of Otto Gebler and Anton Braith and altered it. The Wilhelminian animal image of his beginnings gave soon way to an impressionistically loosened painting style, in which especially light and its color changing ability was raised as an issue. Throughout his life, Zügel's main objects were sheep and cattle, presumably in reminiscence of his childhood as a shepherd's son. More than 40 years the artist attended to the subject 'Schwere Arbeit' [heavy burden]: The painter's development can be seen in c. 24 images of a team of oxen, which led from a detailed depiction to a Cubist reduction and monumentalisation. Zügel chose more and more often larger formats to express his perception of the connection between man and beast, of the eternal circle of life.

Among many other prizes he was awarded the Ritterkreuz der Bayerischen Krone, which meant personal ennoblement, in 1907. Painting incessantly, with the exception of the confusion of World War I, the artist continued working on his extensive oeuvre until the 1930s. Heinrich von Zügel died in 1941 at the age of 90 and left an extensive œuvre. [CB]