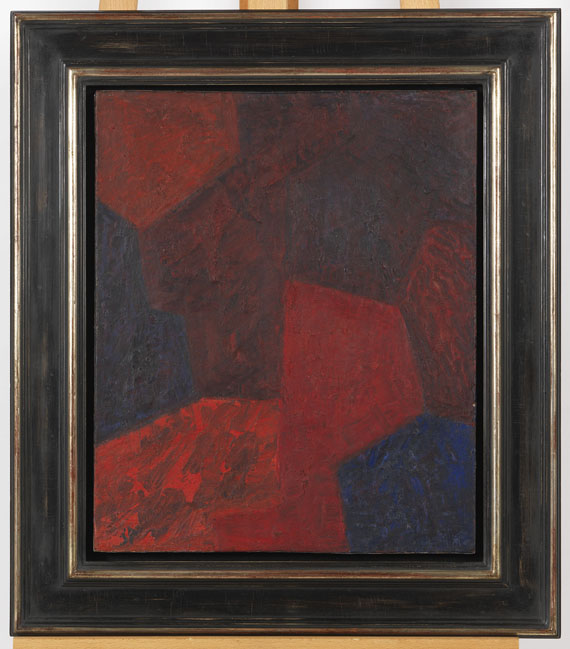 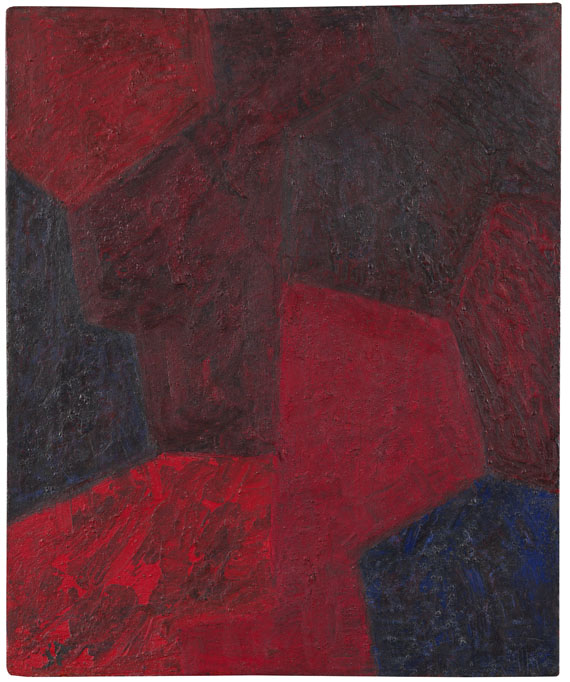 Compositions from the 1950/60s are among the artist's most sought-after works on the international auction market.
The work is registered under the number 962026 in the Poliakoff archive.
Accompanied by a photo expertise issued by Mr. Alexis Poliakoff from 15 December, 1983.

The Russian painter Serge Poliakoff, born in Moscow on 8 January 1900, is one of the most important members of the Ecole de Paris. He fled the Russian Revolution in 1917, first going to Constantinople and then to Paris in 1923, where he spent most years of his life. He began to study painting while earning a living as a musician. He enrolled at the Académie Forchot and Académie de la Grande Chaumière in Paris 1929 and went to London in 1935 where he studied at the Slade School of Art. At first he produced variations of academic traditions and predominantly figurative motifs such as nudes, houses, trees etc. After 1935 Poliakoff increasingly turned towards abstract art, employing coloras color without any figurative context. A decisive influence in this direction was Kandinsky, whom he met after his return to Paris. Sonia and Robert Delaunay taught him to appreciate the emotive quality of colorand awakened an interest in simultaneous contrasts. Another important source of Poliakoff's pictorial language was the sculptor Otto Freundlich with his curved color-formcompositions. Poliakoff developed a very individual form of abstract painting, arranging different color fields next to one another. Shades of brown and gray were his preferred colors during the 1940s, while after the 1950s he extended his palette including bright contrasting tones.

In his late work Poliakoff abandoned the polychrome palette and returned to earth tones and more monochrome works, just as it is the case with this composition. Through their compact- and heaviness the two blue-black fields complete the effect of the red which reaches lucent nuances. Poliakoff's oeuvre became subject of many international exhibitions as of the late1950s and was honored in a comprehensive solo show at the Kunsthalle Bern in 1960 which showed 137 abstract compositions. In 1962, the year this work was made, the artist received his own room at the Biennale in Venice.

Over the later years a number of lithographs, to which Poliakoff attended since 1962, as well as small format paintings were created, when the artist had to take care of himself after a heart attack in 1965. Serge Poliakoff died in Paris on 12 October 1969.