The album amicorum, Stammbuch [German for "album"], the memory or friendship book or album contains entries made by friends, relatives and acquaintances of the owner. Such entries include proverbs and sayings, best wishes, drawings and the like. Nowadays the only albums still in use are poetry albums and guest books. The album amicorum [German also "Stammbuch"] was especially widespread in the late 18th century and during the 19th in bourgeois and student circles. The album is presumably the fruit of several traditions, such as the genealogical table cultivated since the early Middle Ages primarily in noble and aristocratic families or the Geschlechterbuch [German], genealogical guides to members of particular families rather than to the nobility, aristocracy and gentry in general as in England. Further, tournament books also existed, in which those taking part in a tournament would enter their names and coats of arms and possibly also their mottoes and devices. In Germany the friendship book was widespread from the 16th century in bourgeois circles and among scholars and students. Its popularity also grew among craftsmen and artists. The primary function of a Stammbuch album is, apart from originally recording origins and genealogy, to record and confirm relationships across time and distance for posterity. Until the late 18th century, German albums were mainly bound sheets of vellum paper or paper, usually in octavo and mainly in the elongated format. Later albums increasingly became collections of loose sheets in small cassettes or portfolios. Bindings range from simple cardboard bindings to gold-tooled leather or parchment bindings. Depending on the imagination, degree of education and skill of the person making an entry in an album, entries might consist in drawings, engravings, embroidery, paper silhouettes, locks of hair, pressed flowers or the like. 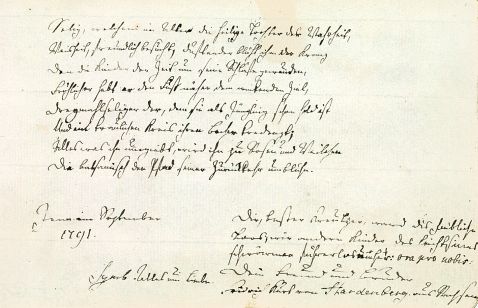