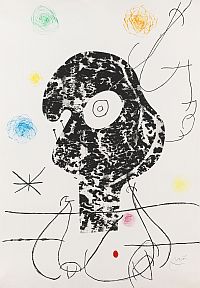 Munich, 8 May 2017, (kk) - Why not buy a Baselitz, Miró or even a Richter for € 1 ? Following the unexpected success of a sale of works by museum artists with starting prices of € 1 early this year, the second € 1-online-auction on www.ketterer-internet-auction.com was just a question of time. It's happening again on 15 June at 3 pm sharp.

A new round is opened with 35 top works by internationally acclaimed artists from the sections of Modern and Post War Art - all with calling prices of € 1. Among them we find works by artists like Günther Uecker, Gerhard Richter, Robert Indiana, Joan Miró, Rupprecht Geiger, Friedensreich Hundertwasser, Jörg Immendorff, Christo and the lately deceased A.R. Penck.

"Online art auctions with starting prices of 1 € - it works!"
Company owner Robert Ketterer knows: "Selling art online works. We have been doing it for more than ten years, but innovation is crucial for success. Our new concept of the € 1-online-auction was a test. It worked out incredibly well straightaway and took the internet auctions to a new era". He continues: "We saw a remarkable interest and realized numerous record results which made for the best quarterly figures since the beginning of our internet auctions. The online sale has become a constant in our house".

It's getting exciting: Ketterer Kunst also extends its pioneering role on the German market in this field. With 5,080 active users and bidders from 68 countries, it counts among the biggest players in the online art trade. The company is aiming at proceeds of € 3.5 million in this segment for this year.

Since it was founded in 1954, Ketterer Kunst has been on the forefront of auction houses dealing in Fine Art and Rare Books, with its headquarters in Munich, and a branch in Hamburg. Representatives' offices in Berlin, Heidelberg, Duesseldorf, the Benelux Union, France, Italy, Switzerland and the US have contributed substantially to the company's success. In addition, exhibitions, special thematic and charity auctions as well as monthly online auctions at www.ketterer-internet-auction.com are regular events at Ketterer Kunst. Robert Ketterer is owner and CEO of Ketterer Kunst.