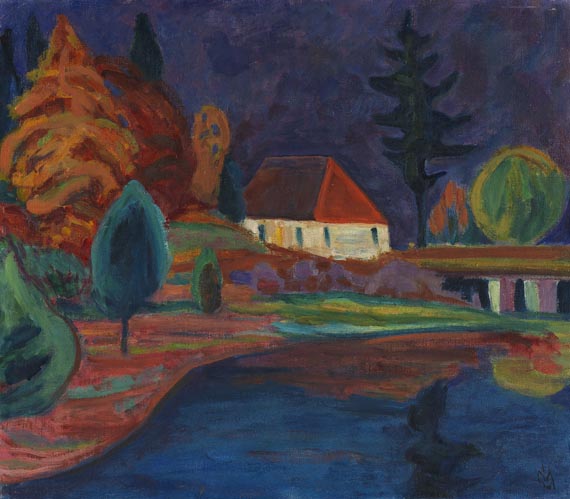 32
Gabriele Münter
Landschaft mit Haus in Oberau, 1908.
Oil on canvas
Estimate:
€ 200,000 / $ 238,000
Sold:
€ 317,200 / $ 377.468
(incl. 22% surcharge)
Lot description
Oil on canvas
Estate no. L 58. Monogrammed lower right. With estate stamp on verso as well as inscribed "L 58" in chalk. Inscribed "G. Münter Oberau" on stretcher. 49 x 56 cm (19,2 x 22 in)
With an old sticker carrying the stamped number "1377" on stretcher. The work was soldon the art market by the estate in 1967 (confirmed by a copy of a letter from Ilse Holzinger, Gabriele Münter- and Johannes Eichner-Foundation, Munich, dated 19 July 1998.
In a letter dated 3 August 1970, Dr. Hans Konrad Röthel, direktor of the Lenbachhaus Munich and the Gabriele Münter- and Johannes Eichner-Foundation, Munich, mentions that the painting is a holographic variant of the topic. In Gabriele Münter's work variations of this type occur "at times with larger, at times with minor alterations" (copy of writing attached).

Accompanied by a written expertise from the Gabriele Münter- and Johannes Eichner-Foundation dated 11 November 2010. The painting will be included into the catalog raisonné of Gabriele Münter's paintings under the title "Oberau".

Gabriele Münter received her first art lessons at the 'Damen-Kunstschule' (Ladies Art School) in Düsseldorf and then attended the Society of Woman Artists as M. Dasio's and A. Jank's pupil. Then she went to Munich where she visited the private art school 'Phalanx' which was run by Wassily Kandinsky. In 1904 Münter and Kandinsky began travelling together: to Holland, Italy, France - where they met Rousseau and Matisse - and elsewhere. Stylistically she now distanced herself from Impressionism and her works began showing Fauve and Expressionist influences. In 1908 she and Kandinsky began leading a calmer life in their apartment in Munich. They often met with Klee, Marc, Macke, Jawlensky and Marianne von Werefkin. The country house Münter bought in Murnau provided an ideal working environment.

Gabriele Münter and Wassily Kandinsky spent the summer of 1908, the year that the painting "Oberau" was presumably made, in Murnau on Staffelsee, together with their artist colleagues Alexej von Jawlensky and Marianne von Werefkin. The sojourn marked an artistic change for all of them: the rejection of an impressionist flow and the beginning of a new perception. Münter expressed this the following: "After a short time of distress I made a great leap – from imitating nature in my paintings – more or less in an impressionist flow – I began to feel the content – to abstract it – to take it to a new level " (translation of quote after Gabriele Münter, retrospective. Munich 1992, unpag. p. 108). In his expertise Konrad Röthel, referencing our work, speaks of an independent replication of a subject that had already been in existence. Münter was quite fond of the work. The painting stands for the new perception she had mentioned, but also shows influences from the art of her colleagues, particularly in terms of coloring, her work shows resemblance to that of Alexej von Jawlensky. Later on Münter abandoned the broken colors, especially the purple tones, in order to turn to a painting that was more dominated by primary colors.

In 1909 the artist began painting glass, a medium which would later also be adopted by Kandinsky, Marc, Macke and Campendonk. Münter was a member of the 'Neue Künstlervereinigung München' for two years and in 1911 she joined the 'Blaue Reiter', the artist group founded by Kandinsky and Marc. She was interested in Kandinsky's development towards abstract art, but her own works continued to be figurative. Her landscapes, figurative scenes and portraits show a reduction to the essential with an inclination towards humorous characterization. When war broke out, Münter and Kandinsky at first moved to Switzerland. Münter, however, decided a year later to go to Stockholm, where she separated from Kandinsky. In late autumn 1917 she moved to Copenhagen. She traveled a lot during the 1920s and spent some time in Munich, Murnau, Cologne and Berlin. After separating from Kandinsky she felt cast into a deep creative block, it was not before the 1930s that her painting came back to life again. After 1931 she spent most of her time in Murnau and Munich. In 1956 she received the Culture Prize of the City of Munich. The year 1960 saw the first exhibition of Münter's work in the US, followed in 1961 by a large show in the Mannheim Kunsthalle. The artist died in her house at Murnau on 19 May 1962. [KD].