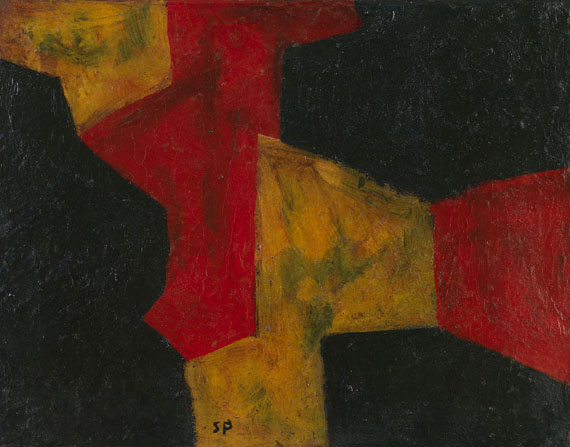 The work is registered in the Poliakoff archive under the number 962022.

The Russian painter Serge Poliakoff, born in Moscow on 8 January 1900, is one of the most important members of the Ecole de Paris. He fled the Russian Revolution in 1917, first going to Constantinople and then to Paris in 1923, where he spent most years of his life. He began studying painting while earning a living as a musician. He enrolled at the Académie Forchot and Académie de la Grande Chaumière in Paris 1929 and went to London in 1935 where he studied at the Slade School of Art.

Serge Poliakoff counts among the 20\up5 th century’s most innovative artists. After beginnings in figuration, the artist gradually attained abstraction as of the mid 1930s and employ the paint as a means of expression without representational references. He was decisively influenced by Kandinsky, whom he met after he had returned to Paris. Sonia and Robert Delaunay raise his awareness for the colors’ emotional quality, and awaken his interest for simultaneous contrast. The sculptor Otto Freundlich and his color-form compositions also had a strong impact on Poliakoff’s pictorial language. In the following Poliakoff developed a very individual form of abstraction, its unifying feature are different color fields placed side by side. The coloring undergoes a change: While he worked in gray-brown shades in 1940s, he increased his palette by lucent and contrasting shades as of the 1950s, as it is the case with this work. Despite its small size, it does not lose its emotional and formal expressiveness. In his later period of creation Poliakoff reduced the strong polychromy to earthen nuances and shows a tendency towards a monochrome art.

Poliakoff's paintings were shown at international exhibitions during the 1950s and 1960s, after his nationalisation in France in 1962 the artist received his own room at the Biennale in Venice. Over the later years a number of lithographs, to which Poliakoff attended since 1962, as well as small format paintings were created, when the artist had to take care of himself after a heart attack in 1965. Serge Poliakoff died in Paris on 12 October 1969. [KP].