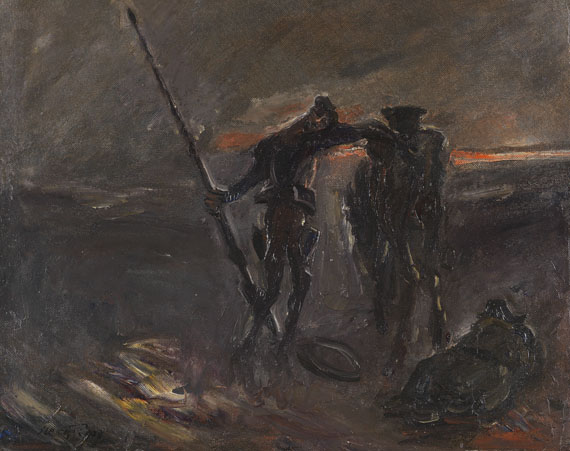 This work's authenticity has kindly been confirmed orally by Bernhard Geil.
The work was once in possession of Dr. Eduard Fuchs, a friend of Max Slevogt. Eduard Fuchs presumbaly acquired this work right from Max Slevogt's studio. Later the Nazis confiscated the work and punished him for political reasons. Upon Ketterer Kunst's request, all heirs after Dr. Eduard Fuchs have stated they will legally binding forfeit an assertion of restitution claims regarding this work.

Between 1884 and1890 Max Slevogt studied at the Munich Art Academy. At this time his work was still under the influence of Wilhelm Trübner, Wilhelm Leibl and Arnold Böcklin. A stay in Italy in 1889/90 helped him to free himself from the Munich Academy even though Slevogt remained in Munich from 1890 onwards. His work was forthwith stylistically influenced by his interest in Dutch art. In 1898, for instance, Slevogt attended a Rembrandt exhibition in Holland. Following a brief interlude in Frankfurt, the artist settled in Berlin in 1901 in Berlin, spending the summer months at Neukastel, his country estate in the Palatinate.

That same year, 1901, he was appointed professor at the Munich Art Academy and, in 1914, he became a member of the Academy of Arts in Berlin. From 1917 he was also director of a master studio. Paul Cassirer exhibited Slevogt's work from 1899. Slevogt was also forging links with the recently founded Berlin Secession. Important aspects of his work are tinged with the interweaving of his talent for painting and drawing on the one hand and music on the other. The artist was also a gifted singer and pianist, with a veneration for Wagner and Mozart. He was also friends with the singer d'Andrade, whom he portrayed in numerous sketches and in his roles ('Der weiße d'Andrade' ['White d'Andrade'], 1902; 'Der rote d'Andrade', ['Red d'Andrade'], 1912). Impressionism informs the artist's œuvre although it has retained elements of earlier painting, Symbolism and Art Nouveau.

Dramatisation of the subject matter dominates the early work. These paintings are in a dark palette and the coarse handling represents a deliberate revolt against traditional history painting. However, increasing familiarity with French Impressionism then caused Slevogt to lighten his palette and apply paint in the pastose style which he would retain for the rest of his career. The interrelationship of light and color became the dominant factor in his pictorial conception. Slevogt is not only one of the most important German painters of the early 20th century; he is also outstanding as an illustrator and print-maker. In these media he worked mainly with mythological or fairy-tale material as exemplified by the well-known 'Ali Baba' (1903), 'Lederstrumpf' ['The Leatherstocking Tales'] (1907) and 'Die Insel Wak-Wak' ['Wak-Wak Island'] (1922) cycles. [KD/EH]. 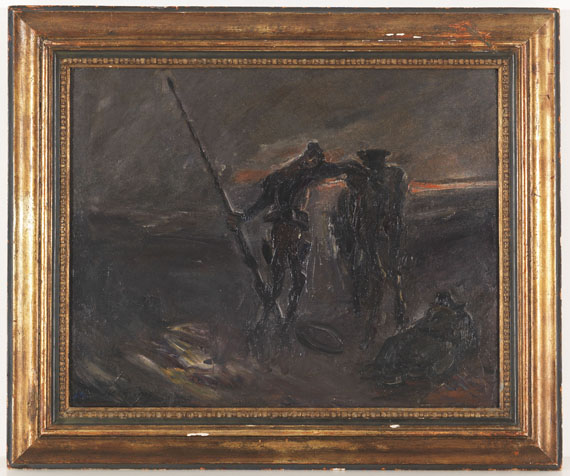