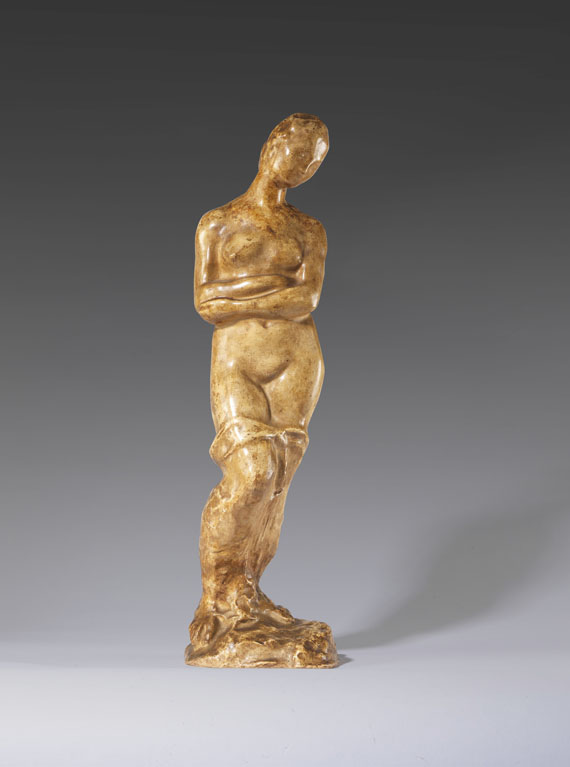 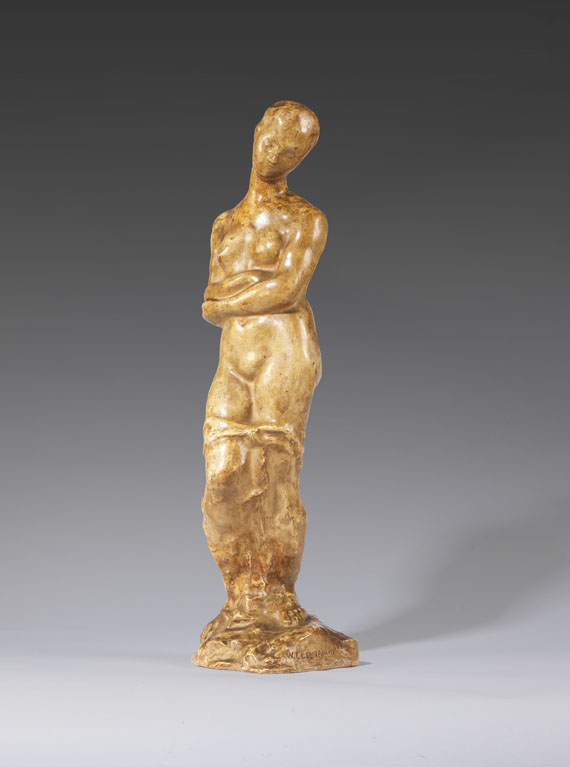 150
Wilhelm Lehmbruck
Kleine Sinnende, 1910/11.
Plaster, resmains of an ocher tint, yellowish ...
Estimate:
€ 30,000 / $ 34,800
Sold:
€ 70,000 / $ 81.200
(incl. 25% surcharge)
Kleine Sinnende. 1910/11.
Plaster, resmains of an ocher tint, yellowish lacquer and spots of Shellac (see condition report).
Schubert 55 C a 1 (of C b 6). With the name on one side of the base. From an edition of ca. 12 copies in this make (cast in 1920), which were distributed through Galerie Tannenbaum in Mannheim and the Kunstsalon Ludwig Schames in Frankfurt am Main. Height: 53.3 cm (20.9 in).
Find more images and a video clip of this work on our homepage.
Alongside the sculptures "Knienden" and the "Gestürzten", the "Kleine Sinnende" is among Lehmbruck's most famous works.
• Next to bronzes, terracotta or stone casts this is one of the artist's plaster casts.
• Alignment charcaterized by calmness and posture.
• Historically interesting provenance.

The sculptor Wilhelm Lehmbruck is considered a pioneer of 20th century sculpture. His artistic career began in 1895 when he attended the Kunstgewerbeschule in Düsseldorf. After his father's death in 1899 he briefly worked as an assistant in a sculptor's studio, but continued his artistic training in 1901 at the Kunstakademie in Düsseldorf. As Karl Janssen's master pupil he was awarded scholarships and the free use of a studio. His first works are influenced by Constantin Emil Meunier and Käthe Kollwitz. Their social subjects are inspired by early works of Emil Zola and Gerhard Hauptmann. The student was greatly impressed by the first large Rodin exhibition in Düsseldorf in 1904. His further development, too, was determined by his artistic relationships.
When Lehmbruck went to Paris in 1910 he met Henri Matisse, Alexander Archipenko, Constantin Brancusi and Amadeo Modigliani who inspired his move towards Expressionist sculpture. The "Kleine Sinnende" is Lehmbruck's first sculpture made after he his relocation to Paris and in context of the new artistic context. In Paris Lehmbruck found his very own style. In its primary conception it is characterized by a physicality that draws on the statuary volume. First and foremost, it unfolds its effect in space. It was Lehmbruck's merit to add a new emotional dimension to the sculpture. "Only a shaper willing to look deep into nature, one who carries a sound understanding of nature inside and who is able to bring his craft to perfection, may dare to bring intentions of expression of such vehemence to the natural form" (Paul Westheim, Wilhelm Lehmbruck, Potsdam-Berlin 1919, p. 35). This addresses the core idea of what Lehmbruck sought to realize in his works. It is no longer the idealism of past eras, but a deep internalization of complex spiritual states.
Lehmbruck exhibited a 'Standing Woman' and the 'Kneeling Woman' at the 'Salon d'Automne'. In 1911/12 the 'Salon des Indepéndents' and the 'Sonderbund-Exhibition' in Cologne, too, included works by Lehmbruck. The artist moved to Berlin at the beginning of the war and worked as a medical orderly in a field hospital in 1915/16. Shocked and disgusted after this military service he spent the two last war years in Zurich. He returned to Berlin in the winter of 1917 as a broken man and committed suicide a few weeks later. While his early Parisian works still reflect Aristide Maillol's heavy sculptural volume, Lehmbruck's figures gradually abandoned the classical style and became more expressive with elongated room-filling forms and increasingly architectural and abstract.
More Information
+
Sell
Get a free appraisal for a similar object!
+
Register for
Wilhelm Lehmbruck
+
Buying from A-Z
+
Contact a specialist
+
Wilhelm Lehmbruck Biography
Share