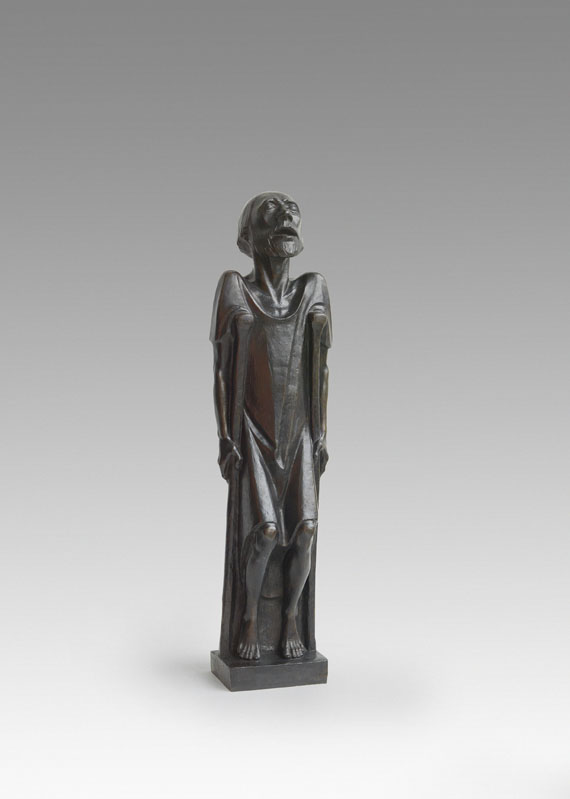 enlarge image
+
250
Ernst Barlach
Der Bettler, 1930.
Bronze
Estimate:
€ 200,000 / $ 184,000
Sold:
€ 312,500 / $ 287,500
(incl. 25% surcharge)
Der Bettler. 1930.
Bronze with dark brown patina.
Laur 445-2. Schult 354. With name and number in lower left of plinth. Verso of plinth with foundry mark "H. Noack Berlin". From an edition of 8 posthumous copies cast after 1979. The only lifetime cast in existence is from 1930 and is in very bad condition today. It is in possession of the collection of the Ernst Barlach Stiftung Güstrow (inv. no. P 229). Ca. 234 x 55 x 48 cm (92.1 x 21.6 x 18.8 in).
Cast by art foundry Hermann Noack, Berlin.
Other casts are in, among others, the following collections:
Ernst Barlach Stiftung, Güstrow (copy 2/8).
St. Laurentiuskirche , Herne.
Los Angeles County Museum of Modern Art, Los Angeles.
Monastery yard, Ratzeburg cathedral.
Originally the "Bettler" was originally intended as part of the "Gemeinschaft der Heiligen", a frieze of three larger-than-life wall figures for the blind niches of St. Catherine's Church, Lubeck. Elisabeth Laur wrote the following on the making of the monumental sculpture: "The plan to make 16 larger-than-life figures for the blind niches on the western facade of St. Catherine's Church in Lubeck was hatched upon a visit of the Lubeck museum director Carl Georg Heise at Barlach in Güstrow in 1929. In his preliminary drawings Barlach reverted to figures he had already conceived earlier, particularly to those from the "Fries der Lauschenden" made between 1926 and 1935. Of six models on a scale of 1 : 4 eventually 3 figures were executed and cast in Senftenberg." (quote after Elisabeth Laur, Ernst Barlach. Das plastische Werk, Güstrow 2006, pp. 212f.).
Only monumental bronze by the artist. Almost all other copies of the "Bettler" are in possession of public collections today.

The strength of Ernst Barlach's sculpting lies in its formal expression which finds fulfillment in the artist's simple pictorial language. Untouched by any influence from his days' latest tendencies in art, Ernst Barlach formed a picture of man that has fundamental impact on the observer depite its lack of verisms. It is especially convincing against the background of social changes and political challenges. Fundamental social values, such as solidarity, empathy and responsibility become personified in the monumental figure of the"Bettler" in a timeless and impressive manner. The sculpture, originally intended for an alcove, can also find its spot in surroundings missing the protection that a niche offers. The sculpture's character is made up by just a few sensually perceptible conveyors of expression which openly show their meaning. By means of all his strength and potential, Ernst Barlach made an accomplishment with this work that delivers proof of his position as one of the most important German modernist sculptors of the early 20th century.
More Information
+
Sell
Get a free appraisal for a similar object!
+
Register for
Ernst Barlach
+
Buying from A-Z
+
Contact a specialist
+
Ernst Barlach Biography
Share