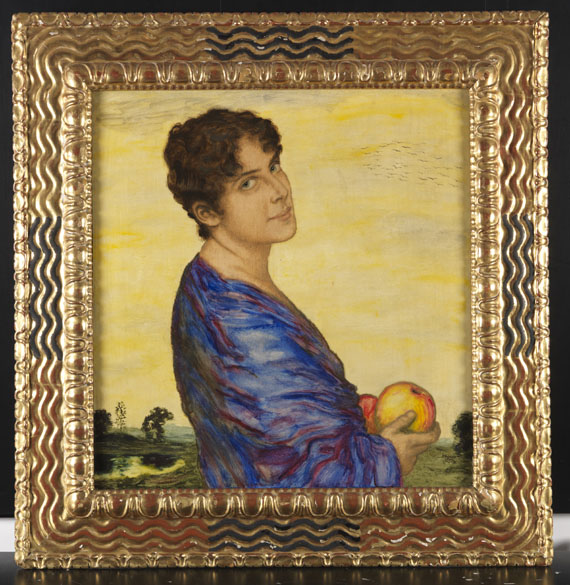 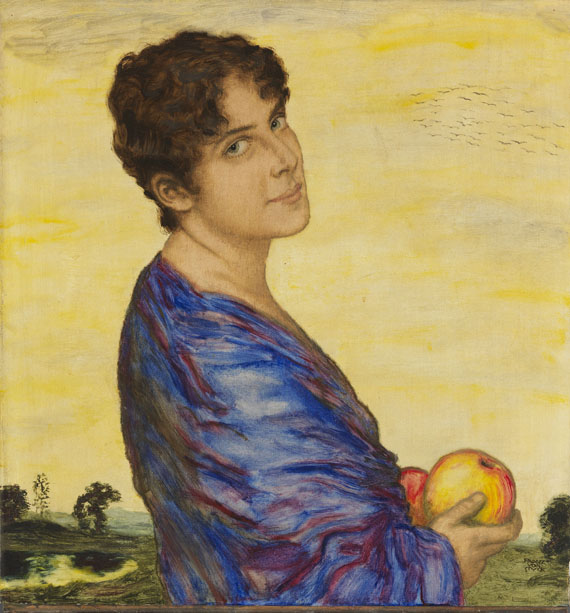 In 1897 the successful painter Franz von Stuck married Mary Lindpaintner. Even though the baker's daughter Anna Maria Brandmair had given birth to their child a year earlier, he decided in favor of the widow of the Munich physician Julius Lindpaintner, who had passed away in 1892. Mary was a beauty and popular with the Munich upper class, she was also known as the perfect host. She was born daughter of an American merchant father and a German mother in Brooklyn in 1865. In 1882 she married Lindpaintner in Munich and had two children with him (Olga, born in 1884 and Erik, born in 1885). Numerous artists made portraits of Mary Lindpaintner, among them Franz von Lenbach. Mary "[.] along with his daughter, who had the same name, was Stuck's favorite motif. He rendered homage to her beauty in scores of portraits. She was his true model and can be identified on may his paintings, at first still as Mary Lindpaintner, later as Mary Stuck, as Pallas Athen, as Naiade or Danzarina. However, Stuck never depicted her naked body; for his nude studies he used other ladies. At the beginning of the 20th century Stuck gradually gave up making portrays of his wife, presumably out of respect for her age. Instead he used older photographs as models for his works." (Cornelia Oelwein, An die Schönheit, in: Antiquitäten Zeitung no. 24, 16 November 2001, p. 997). It seems likely that this portray from 1914 was also based on a large-sized photograph shot in 1900 (52,5 x 31,5 cm), as it shows Mary in similar posture (cf. Jo-Anne Birnie Danzker, Franz von Stuck und die Photographie, Munich 1996, no. 124, illu. on p. 81). Stuck used the same image type in many portrays of his wife (e. g. Voss 203), and also for the portray "Bildnis einer Mainzerin" (around 1914, cf. Voss 452).
More Information
+
Sell
Get a free appraisal for a similar object!
+
Register for
Franz von Stuck
+
Buying from A-Z
+
Contact a specialist
+
Franz von Stuck Biography
Share