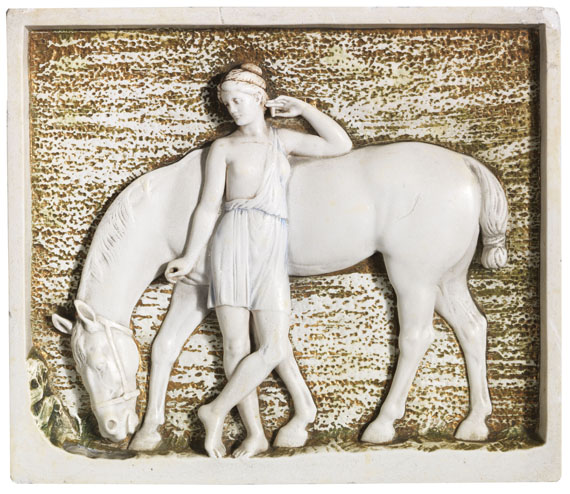 Essay
Artur Volkmann studied sculpting in Dresden and Berlin as of 1873. From 1876 on he spent two years in Rome, which would become his adopted home for the coming decades, on a scholarship. In Rome he became acquainted with the painter Hans von Marées. During the productive period in the 1880s he returned to Germany. He began to add colors to his marble sculptures and took part in the discussion about colored sculptures, which began in Germany at around that time. The ideality of classicist figures executed in white marble is given up for the benefit of more liveliness. Volkmann implemented Marées' concept of the sculpture that "creates the illusion of life" like no other artist. His art is a great example of his teacher's and friend’s principles.
In the late 1890s Volkmann executed the large-size marble relief of the Amazon watering her horse three times in two different versions. The idea presumably dates back to a draft by Marée from 1886, however, preliminary drawings by Volkmann are also in existence. The first version from 1896, which was executed only once, is in possession of a private collection in Dresden. One relief of the second, more detailed version from 1898 is in possession of the State Art Collection Dresden, the other is in possession of a gallery in Munich. The small-size replica in Carrara marble is presumably based on the first version. 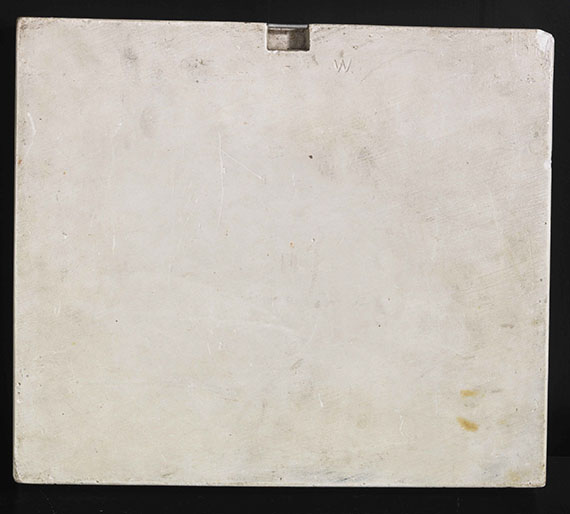 Back side
Artur Volkmann - lots sold by Ketterer Kunst
+
all