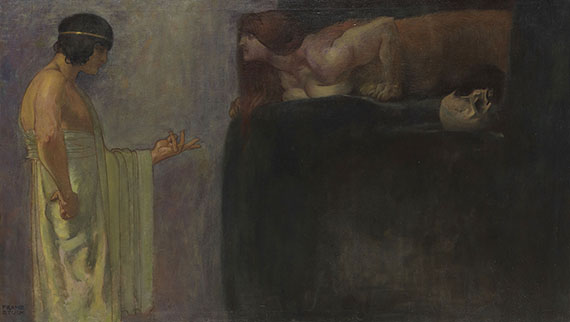 We are grateful to Mr. Albert Ritthaler, Hamburg, for his kind expert advice.

Essay
Figures from Greek and Roman mythology are among the most frequently rendered motifs in Franz von Stuck's vast oeuvre, they reoccur in ever new variants and variations. Stuck's deep interest in antiquity does not only show in his art, it also becomes obvious in the (interior-) design of his villa and the adjacent park in Munich, the centaur as his heraldic animal and his preference for Roman robes. Stuck addressed the theme of the Sphinx in a total of five works. The large oil painting from 1891 offered here 'Ã–dipus lÃ¶st das RÃ¤tsel der Sphinx' (Oedipus Solves the Sphinx's Enigma) illustrates the climax of the ancient legend: Oedipus, the king's abandoned son, is the only one able to solve the mystery of the sphinx. "With great calm he looks the grim philosopher right into her jealous face, lecturing on her with splayed fingers" (Biermann 1893, p. 50). The sphinx' wide open eyes show her horror about her nemesis right before she casts herself into the abyss. In return for Theben's liberation from the sphinx, Oedipus is crowned king and the widowed queen Jocasta becomes his wife â€“ not knowing that she is his biological mother. Beyond mythology, to Stuck the sphinx is a "symbol for the enigmatic and destructive woman, [â€¦] (that is) part of the concept of the 'femme fatale'." (Angela Heilmann, quote after: Claudia Gross-Roath, Das Frauenbild bei Franz von Stuck (dissertation, Bonn 1998), Weimar 1999, p. 280). In the painting 'Kuss der Sphinx' (Kiss of the Sphinx) from 1895, Stuck gave the man at the mercy of the sphinx his own facial features: "Stuck seems to be the one not capable of solving the enigma of the sphinx, that fatal female being. He has to surrender to the woman's kiss." (Gross-Roath 1999, p. 49.). Stuck's changed conception is subject of his later illustrations of the theme. The sphinx, initially a hybrid creature with a female head and the body of a lion, becomes a mere female figure in the posture of the sphinx in his later versions. "He reveals [â€¦] the female character and points to her dark side: Is man â€“ every man is Oedipus â€“ in deadly peril if the woman does not get the right answer?" (Gross-Roath 1999, p. 50).
More Information
+
Sell
Would you like to sell a similar object?
+
Register for
Franz von Stuck
+
Buying from A-Z
+
Contact a specialist
+
Franz von Stuck Biography
Share 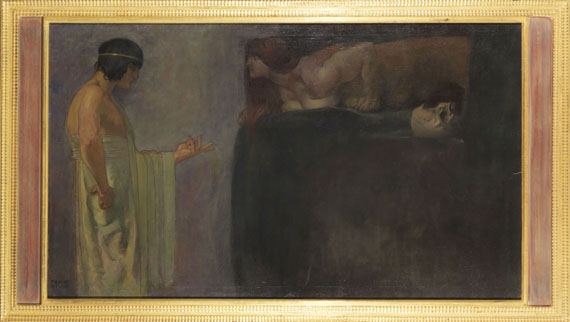