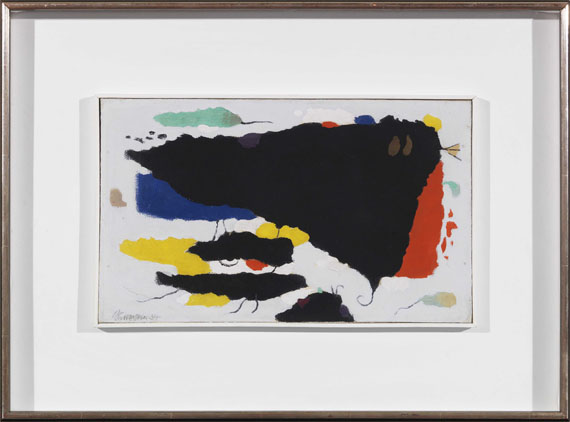 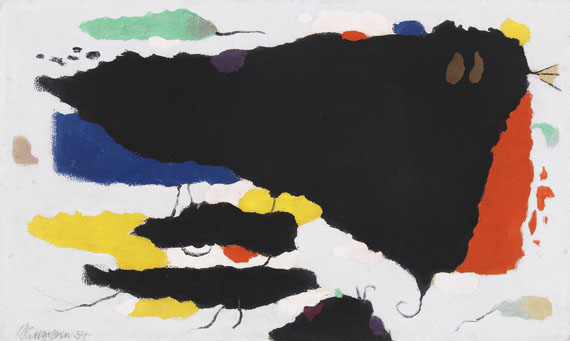 Baumeister's later style culminates in his famous "Montaru" series. Works from this series, made between 1953 and 1955, are characterized by the integration, combination and artistic development of pictorial elements from earlier periods of creation, and find their earliest precursors in works from around 1951.The black color field, typical of the "Montaru" series, which dominates the center of the image and henceforth– just as it is the case with this work – dissects the works into a thrilling composition in its margins, can be found in the painting"Schwarzes Phantom" (Museo Thyssen-Bornemisza, Madrid) from1952. Just a few month later, in January or February1953, Baumeister eventually began to work on the painting "Montaru 1", which today is in possession of the Sprengel Museum in Hanover, marking the beginning of the famous "Montaru" series. An onomatopoetic creation by the artist is eponymous, combining the words "mons" or "mont" (mountain) and the sound "aru", which hints at the pictures impervious darkness and is derived from the name of the biblical mountain Ararat. The blackness, which seems to expand onto and hover above the image surface, is in a characteristic constellation of tension with the image carrier. Further paintings from this impressive work complex are in possession of, among others, the Nationalgalerie Berlin, the Städtische Kunsthalle Mannheim and the Karl Ernst Osthaus-Museums, Hagen.
More Information
+
Sell
Get a free appraisal for a similar object!
+
Register for
Willi Baumeister
+
Buying from A-Z
+
Contact a specialist
+
Willi Baumeister Biography
Share