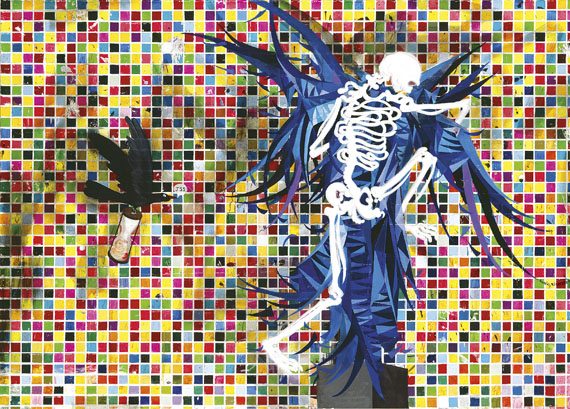 • On exhibition at many acclaimed international museums such as the Louisiana Museum of Modern Art.
• For fans of Daniel Richter "a painting to die for".
• Staged final picture in his great and long exhausted monography "Die Palette".

Daniel Richter's works always have a political connotation. However, when asked in an interview he always puts this aspect into perspective by calling it a general interest in social interaction. Additionally, he reflects on the history of painting in terms of motif and technique in his works. This examination is not of a mere retrospective nature as it also affects current events, just as it is the case with our work "Alles ohne Nichts" (All without Nothing). It is one of his main works from his (to date) “best period” from 2004 to 2008, a time that produced works that are much sought-after by collectors.
In our large-size painting, showcased at the Louisiana Museum of Modern Art in Humlebæk / Denmark in the exhibition "Daniel Richter - Lonely Old Slogans" in 2017, at the Belvedere Vienna and the Camden Arts Center in London, he explicitly references Gerhard Richter's Color Charts. The windows Gerhard Richter had made for the Cologne Cathedral were unveiled in 2007, the same year that Daniel Richter made "Alles ohne Nichts“ in which he references this theme. The background at once calls reminiscence of the Color Charts, which the cathedral windows are based on. After the painting "Ferbenlaare" (2005), the Dance of the Death without costume in front of the 1000 colors motif is the second sideswipe at his namesake Gerhard Richter, the much-hyped art investors’ darling. Apart from this aspect with regards to content, formal aspects also have to be considered: Daniel Richter's pictures show his strong commitment to color and composition. Both are relevant not only in terms of optical effects, but for the message he strives to convey. The contrast between the serial arrangement of the color fields in the background and the striking figurative elements in form of birds, death and a kind of angel figure in front, make for a well-staged tension. In combination with the figurative make of the foreground, the reference to the cathedral windows becomes obvious. In this sense he staged this work as final picture in his great and long exhausted monograph ”Die Palette 1995 - 2007".
The 'angel' seems to shatter into pieces the moment it touches death. The depiction offers a wide range of potential interpretations, which all will eventually include the classic "Vanitas" theme at some point. With a great deal of humor Daniel Richter lets Death, a figure charged with strong symbolic meaning, jump on the bright blue feathered angel type of figure on a base, while a black bird has to carry an hourglass, the attribute of Death. What makes this painting so special is Richter's poised handling of expressive colors and forms, as well as his characteristic choice of theme that he takes to a perfect level of exaggeration. "Balancing at that point of culmination, on the fine line that separates what is barely endurable from what is unbearable, when suddenly a valve bobs up at some point that allows the pressure to vent with a loud hiss – and a little dumb bird says: 'It is just a picture – frozen time.‘“ (Christoph Heinrich in: Ex. cat. Daniel Richter – Die Palette, Kunsthalle Hamburg 2007 and other locations, p. 16).
More Information
+
Sell
Get a free appraisal for a similar object!
+
Register for
Daniel Richter
+
Buying from A-Z
+
Contact a specialist
+
Daniel Richter Biography
Share