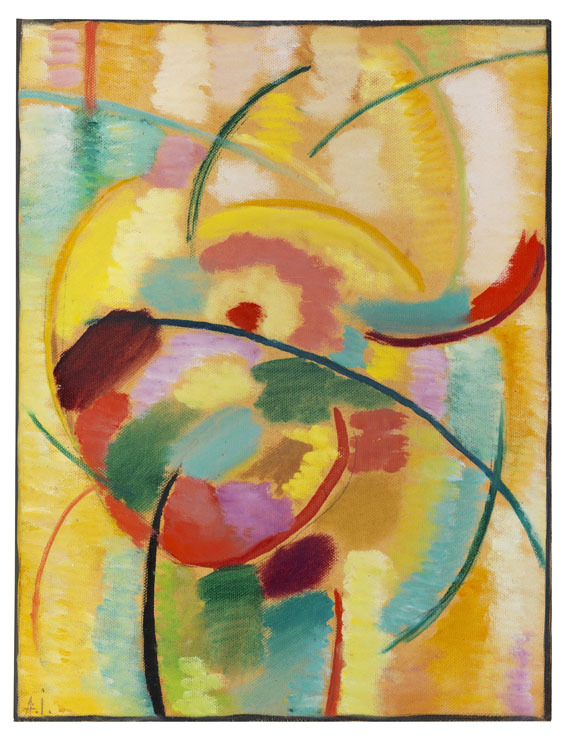 • Verso with a label inscribed by Galka Scheyer.
• Unusually abstract composition in Jawlensky's creation, characterized by an increased bright and colorful expressiveness.
• This strongly abstracted still life with blossoms suggested by the brush-stroke flow is doubtlessly singular in the artist's oeuvre.
• A kind of icon with a gravitation center - an expression of the artist's lifelong pursuit of spiritual clarity
• Family-owned for decades.

"Through hard work and great strain I gradually attained the right colors and forms in order to express what my spiritual self demanded.“
Alexey von Jawlensky around 1916

Essay
This highly abstract flower still life in which the blossoms are suggested by the brushwork is undoubtedly singular in the artist's creation. The bright, warm color palette is wonderful: yellow tones and clear red in the competition for dominance, fine turquoise in contrast to sober green, black, green and red arcs organize the color surfaces, give them dynamic support in the interplay of color forms. Trying to classify this still life in Jawlensky's work, associations with landscapes and views that Jawlensky painted in Bordighera over a brief period in the spring of 1914 emerge. It was at that early point that a painting style characterized by an increased, bright and colorful expressiveness and motifs staged in a playful exuberance became evident – just as it can be said about our still life. Perhaps Jawlensky had "Improvisation 10", made by his friend Wassily Kandinsky in 1910, in mind. In this work moving color fields and landscapes, perspectively arranged with black contours and arches, circle around a fictional architecture. Jawlensky applies a very similar process in our painting, initially distributing dabs of paint like islands across the cardboard in expressive brushstrokes, and arranging the unusual abstract composition with the structuring arches above a center. There is no doubt that Jawlensky began to pursue new paths in Bordighera, paths that he he did not continue to pursue in his exile in St. Prex on Lake Geneva, where the outbreak of WW I forced him to settle just a few months later and where he began to work on the series of the "Variations": Painting the ever same view from his studio window into the garden and onto distant Lake Geneva. With an increased degree of abstraction, these so-called ‘Variations‘ went beyond the natural conditions. Color and shape dominate and gain in intensity, seem like the transfiguration of a motif, become a pictorial idea. On the back of our still life Jawlensky began to render such a "variation" and thus reveals his approach to the structure of the picture: this incomplete composition shows that there is a strong balance between the highly abstracted natural event and the choice of colors from the beginning on.
Relocation from St. Prex to Zurich
When Jawlensky's family and Marianne von Werefkin left the small, remote town of St. Prex on Lake Geneva and moved to Zürich in October 1917, Jawlensky's mood changed, and so did his motifs and palette. Over the coming six months around the the turn of the year Jawlensky worked on the series of the "Mystical Heads" and developed a new variant of the head motif based on a portrait of Emmy "Galka" Scheyer he had made in Zürich in 1917. Despite many individual details of her characteristic, rather youthful appearance, Jawlensky clearly stylized the face with pointed color fields and distinctive lines. Emphasizing the face‘s charisma and the personality‘s inner sound seemed to matter most to him.
Kindred by Choice
The development of the "still life" offered here is rapid and stunning at the same time. The work "Mystischer Kopf, Licht – Erleuchtung des Heiligen, 1917 N.15" acts like a supporting column for the transition from the portrait "Galka" to the almost abstract composition with circulating flowers in our painting. Strong brushstrokes that support Galka's physiognomy can be discovered at the center of our composition, held together with contour lines that we also find in the painting , as we can also relate to in the painting "Mystischer Kopf, Licht" made around the same time. This "Mystischer Kopf, Licht" is the only known painting that reveals its relatedness to our "Still Life" at first glance. We cannot identify a savior‘s face or a mystical head in the still life, but we can clearly make out a kind of icon with a gravitation center that deeply moves Jawlensky and also helps him to continue on his lifelong path to spiritual clarification. And this adds a soul to this "still life", as well as the idea of an emancipation from artistic habits. Is that really true? We cannot say for sure; in this case we can neither fall back on a title given by the artist nor is there a binding date. The signature, however, is a clear sign of the artist's unmistakable appreciation for the strong expression of this composition.
Provenance
The provenance of this "still life" with flowers has been clarified to the extent that Galka Scheyer took over the work after 1918, in order to find a buyer. She met Alexej von Jawlensky in Lausanne on the occasion of an exhibition as early as in 1916 and gave up her own artistic ambitions in order to take the marketing of Jawlensky's works into her hands. The adhesive note inscribed "Stilleben / Gr I_6 " on the back references the classification system she used of organize the works the artist had entrusted her with. We also know that the "Still Life" was owned by some "Fräulein Irene" and that it remained in her family‘s possession through inheritance up until today. "Fräulein Irene" was enrolled at the Academy in Dresden in the early 1920s and belonged to the circle of friends around Franz Kafka. Her father was a pulmonologist and ran a sanatorium in Matliary in the High Tatras, where Kafka was a patient. In Dresden, "Fräulein Irene", as Kafka calls her in letters, made the acquaintance of the reciter Midia Pines. Jawlensky knew Midia Pines; her sister Lisa Pines worked at the Galerie Neue Kunst Fides in Dresden which represented Jawlensky. To this day Jawlensky's "Still Life" remained in the family's possession. However, we are not able to specify the precise time of acquisition. [MvL]
More Information
+
Sell
Would you like to sell a similar object?
+
Register for
Alexej von Jawlensky
+
Buying from A-Z
+
Contact a specialist
+
Alexej von Jawlensky Biography
Share 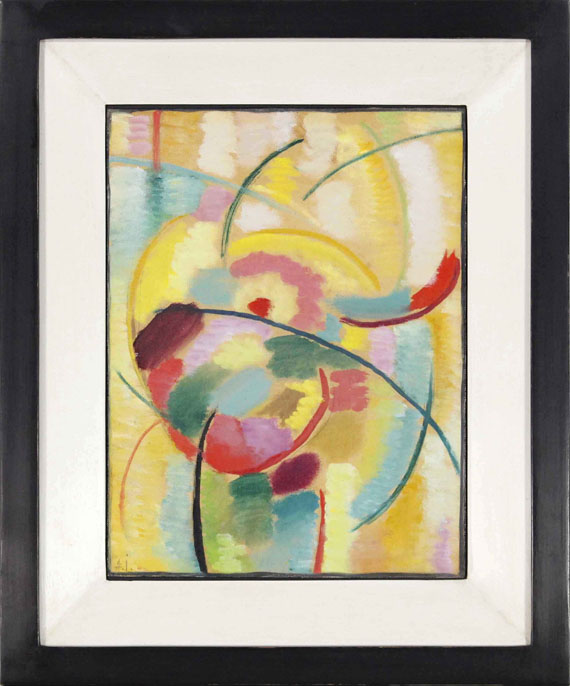 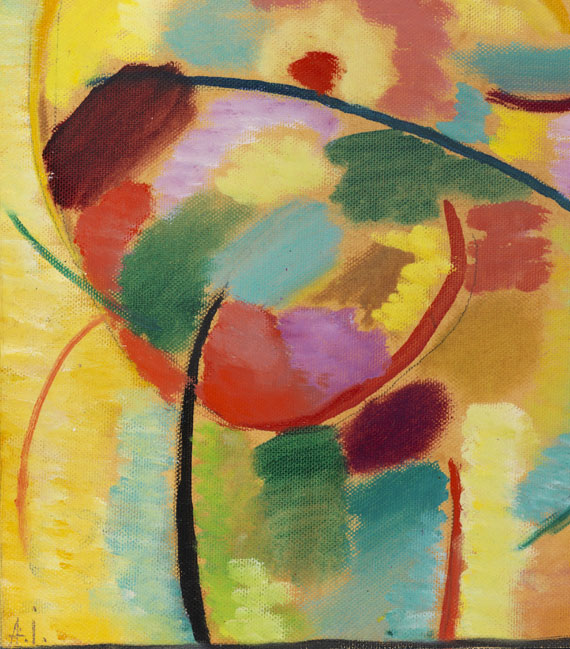 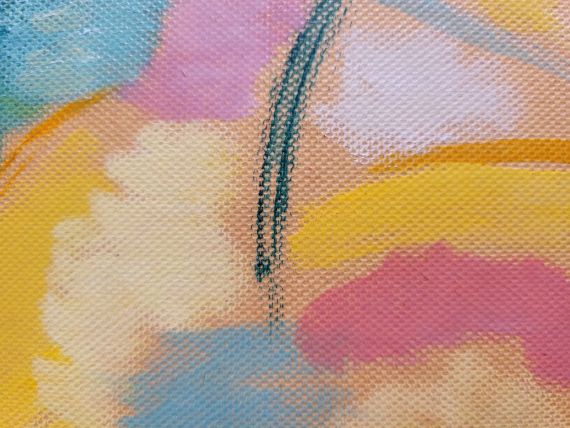 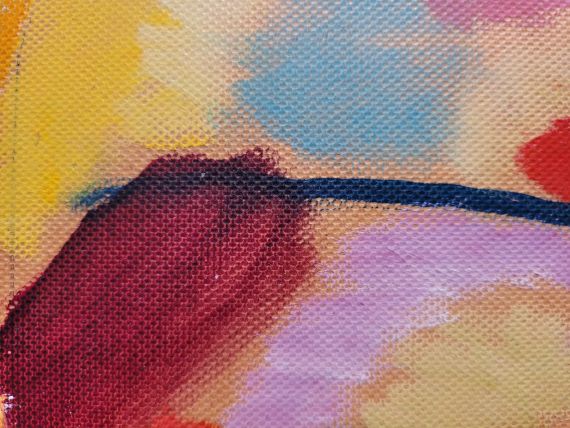