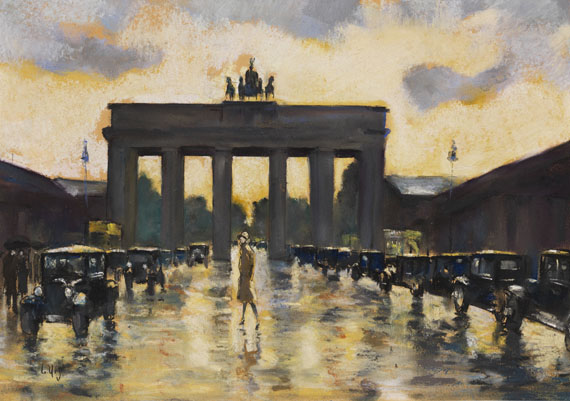 • Prime example of Ury's Berlin scenes as it shows all characteristic elements in unmatched manner: light effects, cars waiting for passengers and people enganged in modern big city hustle and bustle.
• One of the few views in Ury's creation in which the Berlin symbol Brandenburg Gate occupies such a key position.
• Particularly dramatic and light-flooded Berlin townscape in masterly impressionist and atmopsheric pastel technique.
• In terms of coloring one of the best works from his late period of creation, the reflections on the rain-soaked street offer an iridiscent play of colors.
• Artistic orchestration of Berlin in the Roaring Twenties and the type of the modern emancipated woman.
• Acquired for its historic relevance for the Deutsche Bank Collection two weeks after the Fall of the Wall on November 9, 1989.

Essay
Lesser Ury is undoubtedly one of those painters most closely connected with depictions of the city of Berlin. After his father's death, Ury moved to Berlin with his mother at the age of ten. He completed his art studies in Düsseldorf, followed by a stay in Brussels and finally a trip to Paris in 1880, which would have decisive influence on his work. When he met Max Liebermann and Fritz Uhde on another trip to the Netherlands, he followed their recommendation and eventually settled in capital in 1887. The first cityscapes, in which Ury depicts the pulsating life of the modern city, were made. The art critic Adolph Donath was one of the first to recognize the peculiarity of Ury's works, which were ahead of their time for their impressionistic painting style, a style that suited the motifs of an accelerated, changing modernity: “The modern street with its chasing and hissing, its busy people, their sedate horse-drawn buses, their old-fashioned cabs, the big city street in twilight with all the wondrous reflections of the sun on the houses and asphalt, the big city street in the evening and at night with its yellowish pale gas lights and the blazing glow of the electric arc lamps, the big city café in the evening and at night with its deafening haze of light and smoke. ”(Adolph Donath, Lesser Ury, Berlin 1921, p. 14). In 1889 Ury presented his works for the first time together with Wilhelm Leibl, Fritz Uhde and Max Liebermann at Galerie Gurlitt. The gallery owner's brother, the art historian and critic Cornelius Gurlitt, initially described Ury's first works as a series of black and white blobs on a predominantly black color ragout (Cornelius Gurlitt, L. Ury und H. Thoma, in: Die Gegenwart, Berlin, 22 February, 1890). Fascinating and meaningful, however, was what he wrote after he had visited the exhibition: “There has just been a downpour. The street was dripping wet. As I turned into ‘Linden‘, a strange picture was revealed to me. The still bright white sky could only be seen in a strip between the tall houses and the bare rows of trees. But the street in front of me lay brighter, shining like white-hot metal, its damp surface seemed to absorb all the light from the sky and reflected it back to the blinded eye. Car after car passed by. The shiny roofs of the coupés formed a restlessly moving serpentine line towards the Brandenburg Gate, the massive mass of which stood out lead-gray against the sky. Humid air and the sinking day also colored the rows of houses on which only the milk-white balls of the electric lamps could be seen.” (Ibid., quote from Adolph Donath, p. 17f.). Through Ury the city experienced an aesthetic appreciation for the first time, and he saw the peak of his creation. His cityscapes, which capture the eternal flow of the nervous, electrifying atmosphere of Greater Berlin during the Weimar Republic, brought him official recognition in the early 1920s through acquisitions by Ludwig Justi for the Nationalgalerie, and Lovis Corinth appointed him honorary member of the Berlin Secession. In our work Ury put sole focus on the Brandenburg Gate at the end of the boulevard Unter den Linden. On the important Pariser Platz, where the Academy of the Arts, government buildings, the Russian embassy and the Max Liebermann‘s palais are located, the cars that wait for passengers are lined up on the street. With an unusual central perspective, he effectively places Berlin‘s most prominent monument in front of the backlight of the golden sky, which shimmers in the rain-soaked street while its light permeates the whole atmosphere. In the middle of the pillars under the Quadriga with the Goddess of Victory he likewise raises a monument to the elegant Berlin woman of the Roaring Twenties who appears fused with the bright light. [KT]
More Information
+
Sell
Would you like to sell a similar object?
+
Register for
Lesser Ury
+
Bidding Options
+
Bid by telephon / written
+
Buying from A-Z
+
Catalogue Order
+
Contact a specialist
+
Lesser Ury Biography
Share 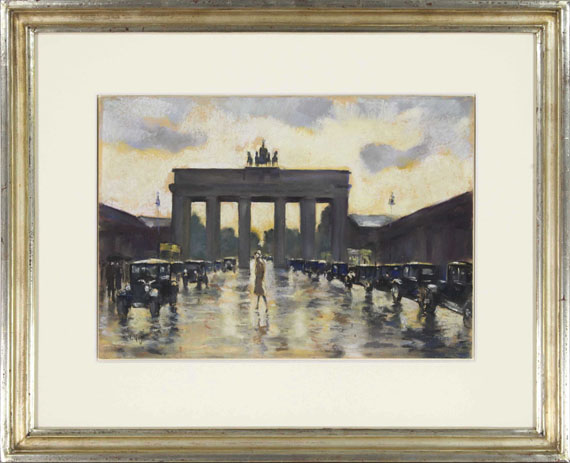 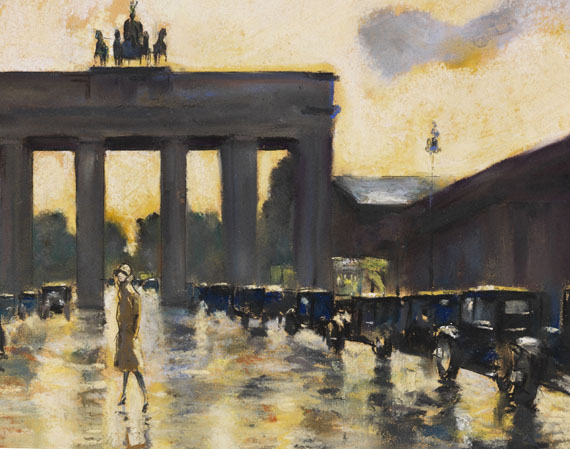 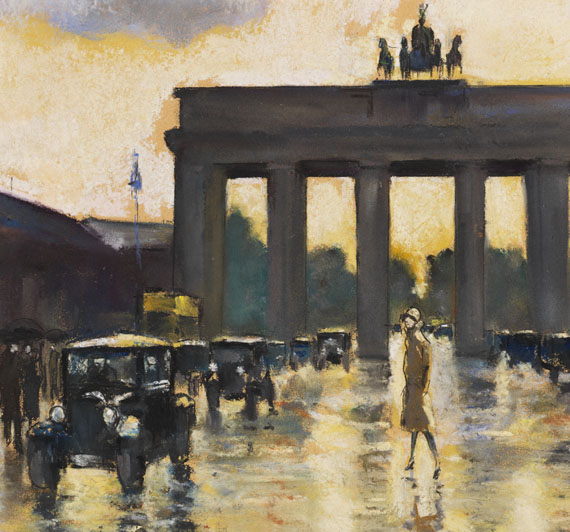 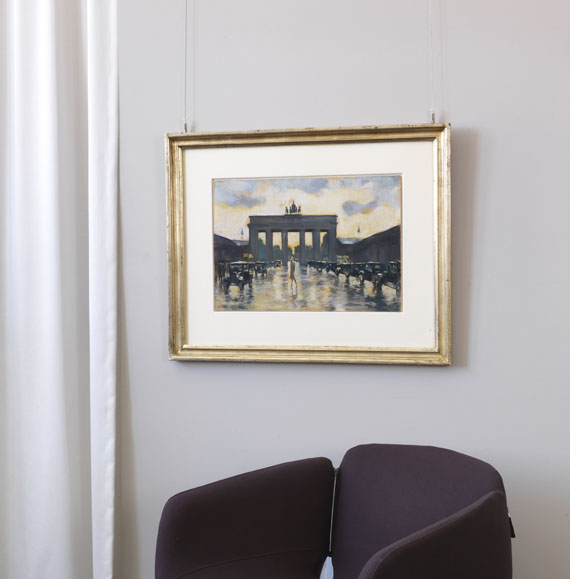 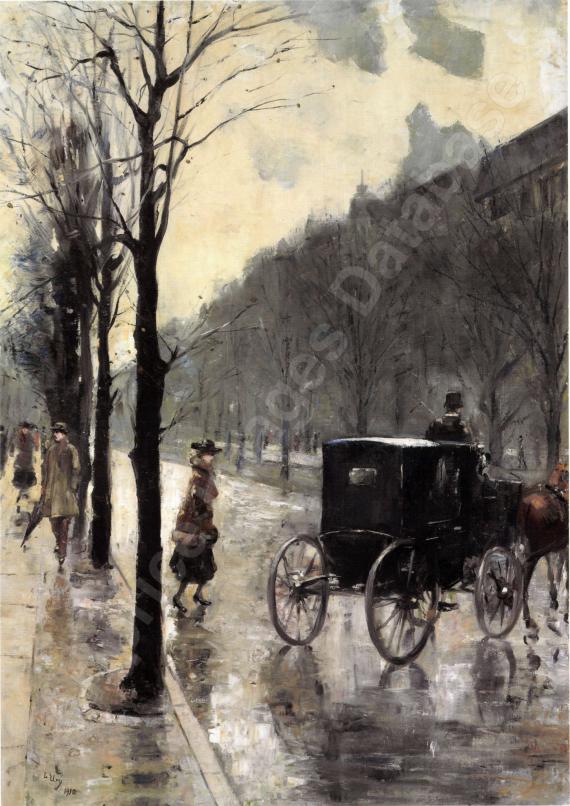 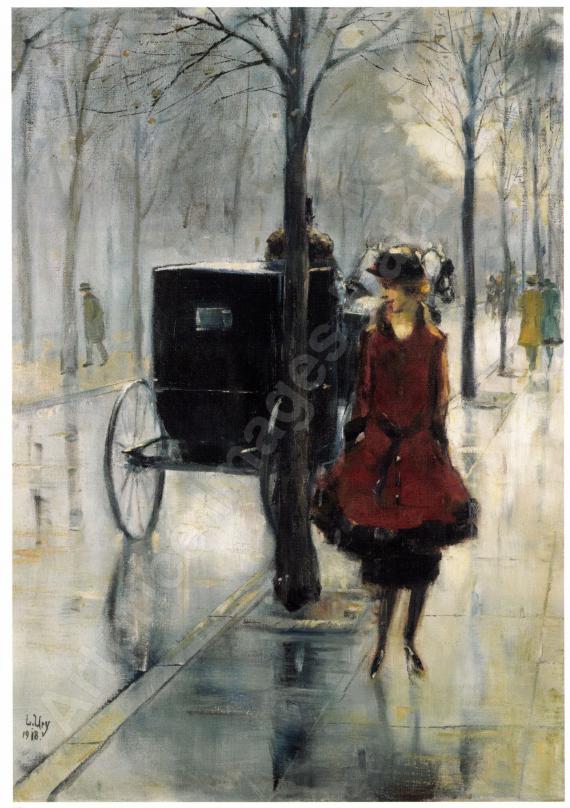 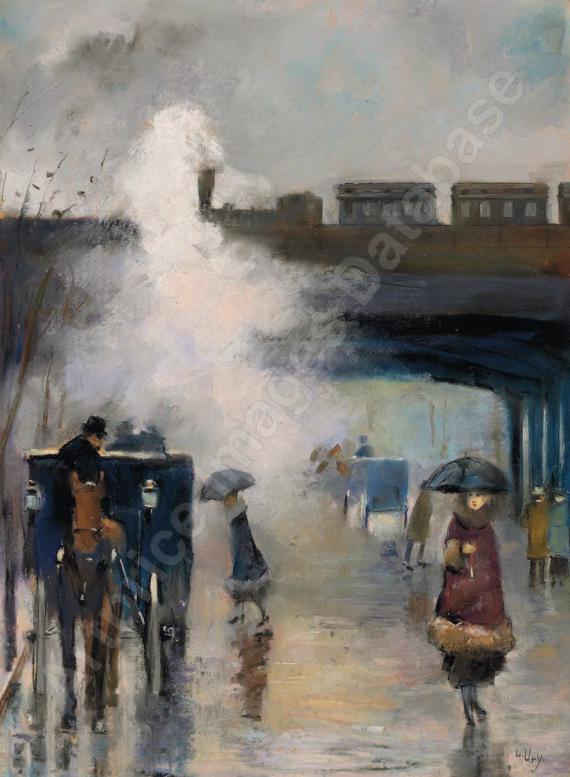 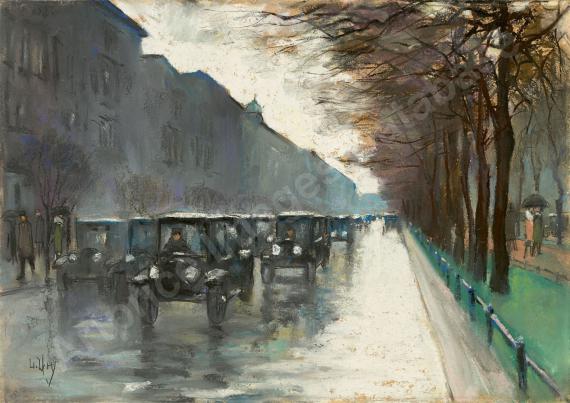