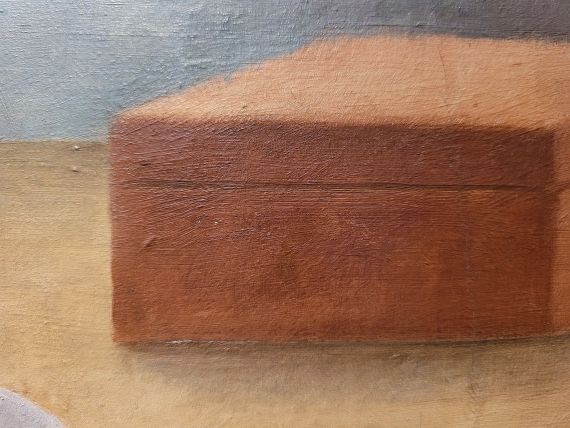 • Characteristic composition by one of the main representatives of New Objectivity - a work of museum quality.
• The mysterious figure compositions with young melancholic women are among the most sought-after works in Schrimpf's pictorial oeuvre.
• Only one other nude from Schrimpf's works made in the style of New Objectivity is known. Today it is in possession of the Museum Ludwig, Cologne.
• After the artist's timely death in 1939 the painting was shown in commemorative exhibitions in Munich and Berlin.
• Ever since the work was made it has been part of a Southern German private collection.

PROVENANCE: Private collection Southern Germany (acquired driectly from the artist, ever since family-owned).

The work of the early deceased Georg Schrimpf, who was one of the outstanding representatives of the New Objectivity, is small and exquisite. It is the art of the period between the world wars that got its name from the exhibition "Die Neue Sachlichkeit. Deutsche Malerei seit dem Expressionismus" (The New Objectivity. German Painting Since Expressionism), on view at the Kunsthalle Mannheim in 1925. In addition to works by Georg Schrimpf, the selection also included works by George Grosz, Otto Dix and Karl Hubbuch. His still lifes with rubber trees and cacti are particularly beautiful, while his deserted landscapes, which combine a romantic delimitation with an almost hopperesque objectivity, are clear and wide. His most sought-after works, however, are his figure paintings, which almost exclusively show young women in pensive and melancholic poses, and who, owing to their almost eerie calm, quickly cast a spell on the viewer. What makes them so special is their de-individualized type, their almond-shaped eyes, the strictly parted hair and their always somewhat squat physicality. Schrimpf's love for the artist Maria Uhden, his first wife, can certainly be blamed for this unique type of woman, because "she was tall and, despite her twenty-two years, a little womanly corpulent, had a clear, good face and beautiful dark, talking eyes. "(OM Graf, quote from: G. Schrimpf and M. Uhden, Berlin 1985, p. 200). In 1918 the young artist died of childbed fever after the birth of their son, in order to cope with the situation Schrimpf began to make depictions of Maria with the child in a medieval tradition, which eventually led to a further typification of his figure paintings. "Mädchen mit Spiegel” (Girl with a Mirror) is one of those wonderful paintings in which everything characteristic of Schrimpf's signature style is united: the rapt melancholic female figure, a reduced interior typical of New Objectivity and warm, muted colors In addition, "Mädchen mit Spiegel" is one of the artist's very rare nudes. Apart from his early expressionist works, the Museum Ludwig, Cologne , is in possession of the only other known nude painting from Schrimpf's neo-objective period. Schrimpf died at the age of forty-nine in Berlin, just eight years after our painting was made. His obituary read: "Schrimpf's name has gone down in the history of modern painting as that of the founder of 'New Objectivity' [.]" (C. Hohoff, quote from: ibid., P. 2). To this day Schrimpf is regarded an outstanding representative of New Objectivity. The acclaimed collection of the Lenbachhaus in Munich includes works by Christian Schad and Rudolf Schlichter, as well as seven paintings by Georg Schrimpf. [JS]
More Information
+
Sell
Get a free appraisal for a similar object!
+
Register for
Georg Schrimpf
+
Buying from A-Z
+
Contact a specialist
+
Georg Schrimpf Biography
Share